For many, the Mercedes-Benz S-Class is THE go-to executive limousine of choice. But has it met its match against the new BMW 7 Series and Range Rover SV Autobiography?

If you’re in the market for, and have the necessary funds to afford, an executive limousine, chances are you’ll choose a Mercedes-Benz S-Class.

Easy decision, right? After all, the S-Class has been the purveyor of luxury and technological innovation since its official debut in 1972: among numerous others, the S-Class has introduced airbags, electronic stability control, disc brakes and independent suspension, changing the motoring world forever as it did so. Throw in opulence that only Bentley and Rolls-Royce could offer at more than double the price, and it’s little wonder the S-Class set the bar early doors.

That Mercedes took a ‘best or nothing’ approach to the updated limo that debuted in 2013 speaks volumes about Stuttgart’s commitment to the ‘essence of luxury’. Far more than spit and polish, the sixth generation introduced a more efficient ‘hybrid’ aluminium chassis, automated Magic Body Control suspension and a yet-further refined ride comfort, effectively picking up the baton left by the then-defunct Maybach brand. Both customer and motoring hack interest was tweaked. Clearly the Mercedes S-Class was still the executive limousine of choice.

Fast-forward two years. BMW had just launched the sixth generation 7 Series, and though the barely touched (albeit still muscular exterior) suggested little had changed, beneath the surface, things were very different. Alongside a range of new engines, extensive use of carbon fibre reinforced polymer saw the overall kerb weight drop by a hearty 130kg. Steering, dampers and chassis had each received a fine-tune, plus an array of driver assistance technologies and cabin comforts – including a Rolls-Royce-inspired ‘Sky Lounge’ panoramic glass roof – ensured the new 7 Series forged a massive step in the S-Class’ direction. Could it be? Might the Mercedes S-Class, once the pillar of mainstream luxury, have actually been toppled? 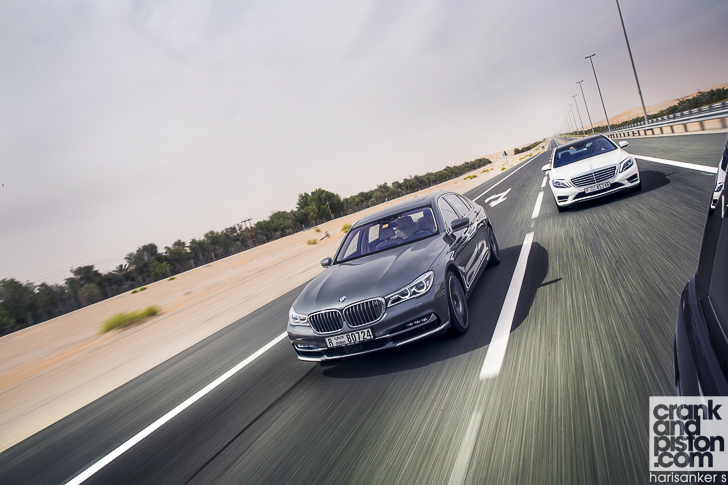 Traditionally this is where the ‘it’s 5am, we’re in Hatta and we’re already knackered’ portion of our story begins, but we’ve yet to welcome our third contender. A more radical one at that. In 2012, Land Rover introduced only the fourth Range Rover in 42 years, one considerably more refined – though no less capable – than any of its predecessors. The looks were smooth and considerably less utilitarian, the ride was exemplary, and the cabin – loaded with leather upholstery, veneer detailing and touchscreen infotainment – was a far cry from the plastic floor mats and grab handles that had come before it: the words ‘Jaguar-esque’ were uttered in hushed tones. Truly this was a Range Rover that balanced off-road ability and day-to-day civility better than ever before, and it wasn’t long before the über plush, über swanky SV Autobiography arrived to demonstrate what the new, more premium Range Rover could really do.

“Might the Mercedes S-Class, once the pillar of mainstream luxury, have actually been toppled?”

And that’s got us curious: could the most luxurious Range Rover yet be considered an executive limousine? And if it does, might an SUV actually overhaul both the BMW 750Li and the S 500 as the best available today?

My investigation begins with the current benchmark, the S-Class. And as you can imagine, the design and refinement on the inside borders on awe-inspiring. Compared with the button-heavy, overly fussy layout that now heads into retirement, the new dashboard is so minimalist and sweeping in its curvaceous design that it borders on artwork. It’s a theme that continues down the transmission tunnel, a rotary dial for both TFT colour displays, a track pad and a couple of buttons is about it, a combination of meticulously cut leather and LED ambient light strips ensuring that nothing as ghastly as plastic graces our faux-executive peepers. Head and legroom is cavernous, and even more so in the back, a result of Mercedes developing the S-Class in long wheelbase guise first for the sake of torsional rigidity and greater passenger comfort. A commitment made yet clearer by the ride quality. 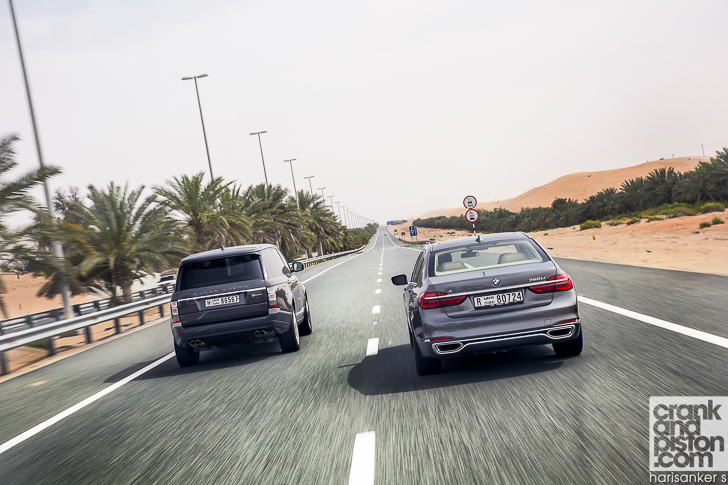 Sweet mother it’s good. One could even say faultless. At the base is the rather nauseatingly named Magic Body Control, the first suspension setup in the world with ‘eyes’: by scanning the road ahead several bajillion times a second, the dampers are automatically configured to glide over even the roughest of asphalt, nary a thump or bump consequently coercing their way into the S 500 cabin. It’s a system so fastidious yet so subtle in its mannerism, you might reasonably think the whole thing is done through witchcraft, the beautifully smooth ride quality combining with the magnificently recumbent seats to lower your blood pressure immediately. Select the ‘Fast and Vigorous’ massage to go cross-eyed.

A decisive early shot then for the Mercedes, even despite BMW’s eye-popping design in the 750Li. Like the Merc, the previously chaotic centre console – akin to an explosion in a button factory – has been ripped clean from its moorings, replaced instead by a more elegant layout. BMW can’t help overcomplicating the design though, and while the system is more intuitive, still there are too many things going on, too many sub-menus and too much switchgear to truly rival the S-Class’ elegance: the front passenger – shock, horror – is denied a seat massager, and even the ride quality can’t quite hit the same level, the dynamic dampers  beautifully supple, granted, but with not quite the same impact as the S-Class.

“Might the Range Rover SV Autobiography actually overhaul both the BMW 7-Series and the Mercedes S-Class as the best available today?”

Saying that, I’ll admit that having the option of ‘Comfort Plus’ is a novelty that makes me grin: I guess regular Comfort mode just isn’t enough for some delicate flowers. Head and legroom are equally as impressive, despite the BMW being slightly shorter, and some of the Bimmer’s new technology is genuinely interesting: we lose more time than we care to mention mulling our ‘Ambient Light’ choices before settling on Bronze without White accenting. The headliner though is the BMW Display Key. It works like a mini iPad, allowing you to select climate control and media options from outside the vehicle. There’s even a Remote Parking option, meaning the driver doesn’t need to be in the car whilst reverse parking. The 750Li may not match the S 500’s sophisticated ride quality, but stands tall on tech alone. 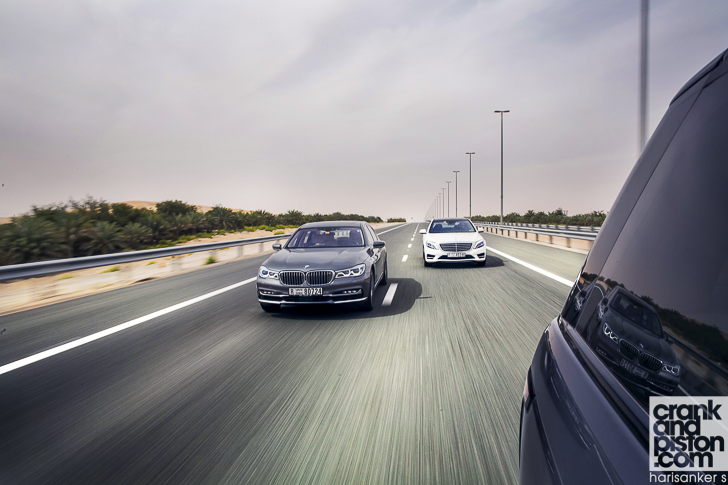 And what of the Range Rover, given that the ‘SV’ denotes additional handiwork from Jaguar Land Rover’s Special Vehicles Operations like plusher detailing and fluffier leather? Surely the crème de la crème from Land Rover has a decisive warning shot to fire?

Ironically, an exclusive front grille and an ‘SV Autobiography’ emblem aside, there’s little difference to the cabin design over the already excellent Range Rover base: the inset buttons on the dash are pleasing to both sight and touch, infotainment and climate control are easy to navigate through a comparatively minimalist dashboard design, and we’ll probably never get bored of the rotary shift controller rising from the transmission tunnel on start-up. In the back though, it’s a different matter, with a weighty centre console for rear passengers, seats that recline almost horizontally, buckets of head and legroom, a cooler, and deployable tables. Everything an executive might need on the cruise to the boardroom. Throw in stunning build quality and a couple of TV monitors, and at least one question is partially answered.

“Sweet mother it’s good. One could even say faultless”

Where perhaps things start to go awry for the Range Rover is the ride comfort. While those 22in alloys may look the part, they do not glide quite so effortlessly over the ground as either the BMW or Mercedes. Then there’s the suspension, designed not just for graceful cruising on road but also for dynamic capabilities off it. As a result, the ride is not of the same exacting standard, somewhat ironic given that the cocooned nature of the cabin means wind and road noise are surprisingly good. Even with a 5-litre supercharged V8 under the bonnet.

This particular fire-breather should be no stranger to fans of the Jaguar F-TYPE and Range Rover Sport SVR, and in the SV Autobiography it produces 542bhp and 671lb ft of torque. That’s 98bhp and 93bhp more than the BMW and Mercedes respectively. Even despite the 2560kg kerb weight, Britain’s colossus will still hit 100kph from standstill in an impressive 5.2 seconds. In the face of such raw power then, the SV Autobiography is less than refined under heavy acceleration: punch the right pedal and you’ll feel the whole cabin tilt back. Said power delivery is slightly less ferocious than the SVR, granted, and doesn’t boast the same rampant V8 roar, but the impact is nothing less than aggressive as a strong opening kick in the low revs slides effortlessly into strong, linear – but no less visceral – pull across the range. Sure, the pick-up is breath-taking, but is ‘aggressive’ what we’re looking for from a luxury limousine? 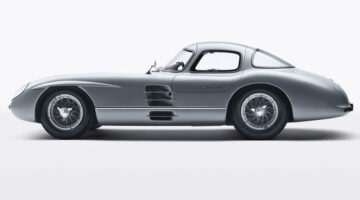