Turns out Mercedes knows comfort. I mean SERIOUSLY knows comfort, and we found out when we took the brand new Mercedes-Maybach S600 to meet a classic1959 W180 220S

“…holy crap, these seats are comfortable!”

Ahmad sitting next to me can’t help but stifle a small laugh. This pristine 1959 W180 220S after all has been with his family for three generations, and though he regularly enjoys sharing the experience with friends, family and the occasional automotive journalist, it’s rare he actually lets someone but himself behind the wheel. My mini-outburst aside, I can already tell this is not going to be your standard test drive. The heritage alone backs that up.

In 1954, five years before Ahmad’s 220S rolled off the hand built production line, Daimler introduced its first brand new series since World War II, the W180, a more up-scale alternative to the W120 that hitherto had been the company’s mainstay model. The newboy though – the 220a – featured a longer wheelbase, assigned to support the six-cylinder engine that would power the W180 series until production ended, although by 1956, power from said straight-six had been upped from ‘more than you need’ to 105bhp – and later 120bhp when twin carburettors were installed – when the updated 220S was introduced in Frankfurt. As you can imagine, it’s not a significant amount of power I’m being ‘forced’ to deal with, but the operation involved is slightly more Germanic than I had expected. 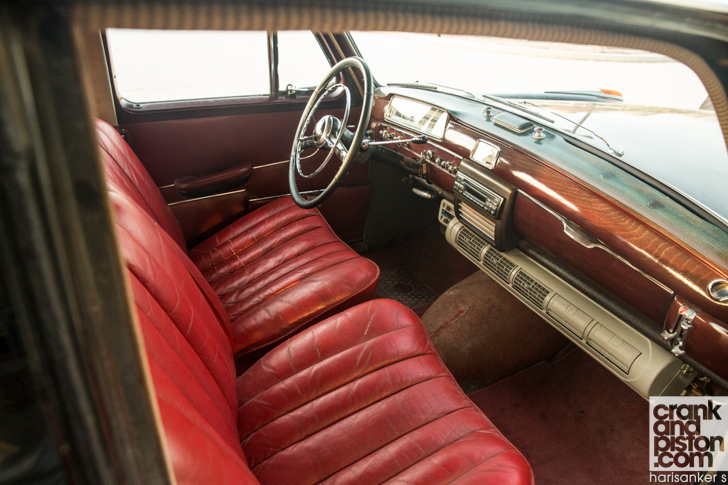 The manual gearbox for instance is not mounted by my right hip, the 220S instead utilising a column-shift four-speed (plus reverse), a familiar layout for large SUVs and pick-up trucks but slightly random for a luxury limousine, particularly since the manual layout remains intact: pull the thin – and, to my mind, very fragile – gear ‘lever’ back and down, and click into place to select first; move up and click again to select second. As a process, it’s very straightforward, since the clutch has been abandoned altogether in favour of a torque converter. And yet in operation, I worry not only that the lever may pry loose in my hands – this is delicate 1950s craftsmanship we’re dealing with here – but that a fudged gear change could spell big trouble for the six-cylinder under the bonnet. Trouble that my bank balance probably won’t be able to cover without a sizable loan.

“My drive in the 220S might be short, but it leaves a lasting impression”

Fortunately fate plays ball today, and we start to pick up speed. Not unduly, obviously – even in its day, top speed for the 220S was just over 160kph – but enough to get a sense of the refinery involved, and it’s difficult not to see that in the design of the 220S alone. Compared with the Mercedes-Maybach S600 I’ve turned up in for today’s test (which I’ll come back to in a minute), the only leather we find in the cabin is on the seats – have I mentioned how comfortable they are? – while the dashboard is trimmed elegantly with wood. The steering wheel is enormous, and suitably ornate, the horn activated by pushing the inner chrome circle mounted to the wheel itself (which I find both charming and hilarious). There are more buttons on the dash than I know what to do with alongside the customary Mercedes clock. The only modern embellishments are an aftermarket stereo and a rather revolting air condition system by the passenger footwell, though given the ungodly humidity we’re dealing with today, I can understand why that’s here. 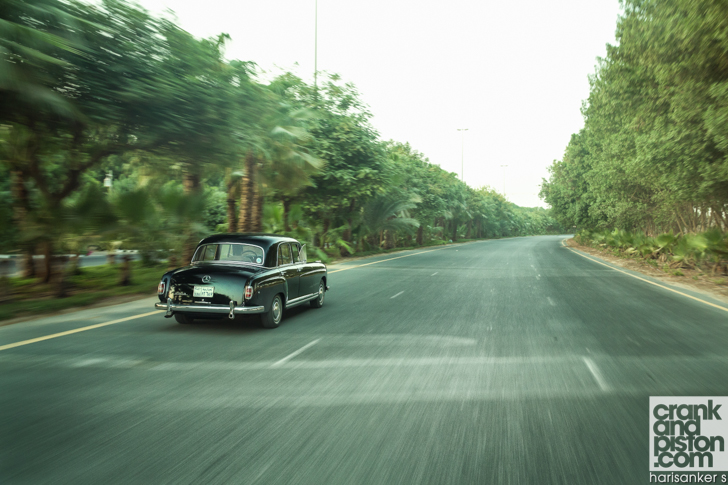 Undoubtedly the cabin is a piece of antiquated beauty, my personal favourite touch being the small winglet windows, open fully to let some of the oppressive heat out, even though they can’t quite measure up to the task. One slight drawback though is the seat itself, adjust options for which are limited: when cornering I have to shuffle the almost impossibly delicate wheel between the hands since the wheel is balancing – effectively – on my legs.

Surprisingly, even with only limited power-assisted steering options, there is plenty of give in the wheel, the connection with the front wheels questionable –this is a luxury saloon we’re talking about – but the manoeuvrability of the front end really quite impressive. Not that I’m about to start discussing ‘balance’ or ‘poise’, for although those front tyres are surprisingly grippy, there’s an enormous amount of body roll as I feed the gigantic wheel through my hands, the diminutive 13in alloys and the über soft suspension doing little to counter this. My shocked expression as we totter around each corner once again has clearly amused Ahmad: I don’t immediately notice, but for the first few turns, I’m muttering to myself in concentration, trying to remember where third gear is on the column mount. 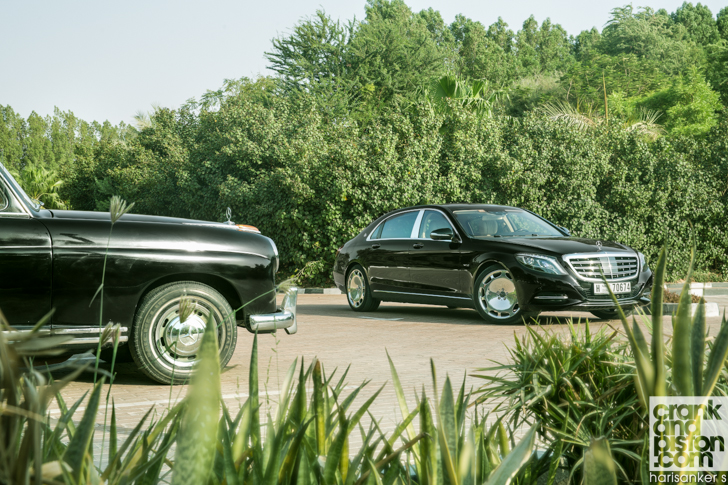 My drive in the 220S might be short, but it leaves a lasting impression, primarily due to the comfort. Even though the S-Class measures nearly a metre shorter than the Maybach, the headroom is simply staggering, as for that matter is the ride comfort, the softened suspension floating gracefully over even the most rutted of surfaces (not that I make a point of testing that theory too far). The six-cylinder soundtrack is slightly more raucous than I’d expected but not so much to unduly affect our conversation in the cabin: it’s a mighty sound, the surprisingly basy notes of a 2-litre six-cylinder combined with the genteel civility of a luxury limousine.

After a while though, the heat gets the better of both of us, and though Ahmad and I are keen to keep the drive going, we soon park up and make a dash for the Maybach, I taking up point at the wheel as my companion slides into the reclining ottomans in the back. The S600 has been ‘specially designed to be chauffeur driven’, after all…