Mercedes-AMG GT63 S vs Porsche Panamera Turbo – beyond the supersaloon

The Mercedes-AMG GT63 S has targeted the Porsche Panamera Turbo in power, shape and customer, but how do they stack up when side by side? 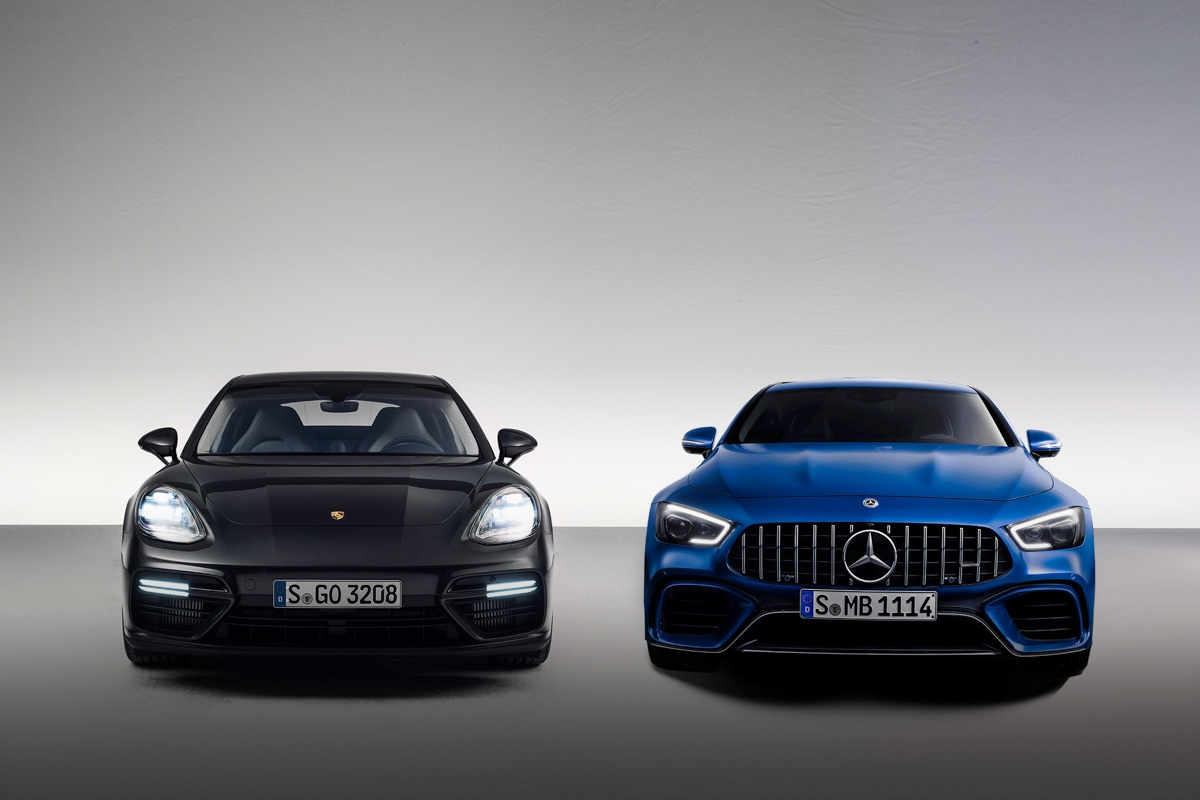 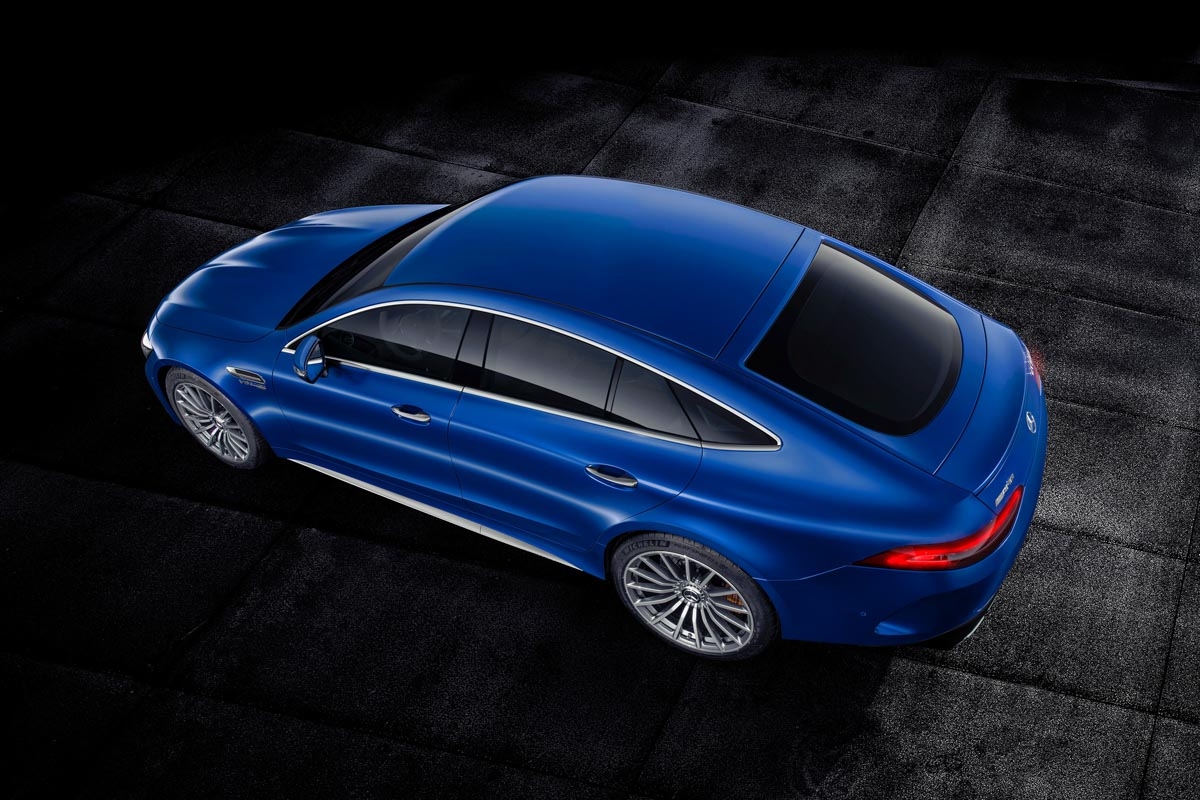 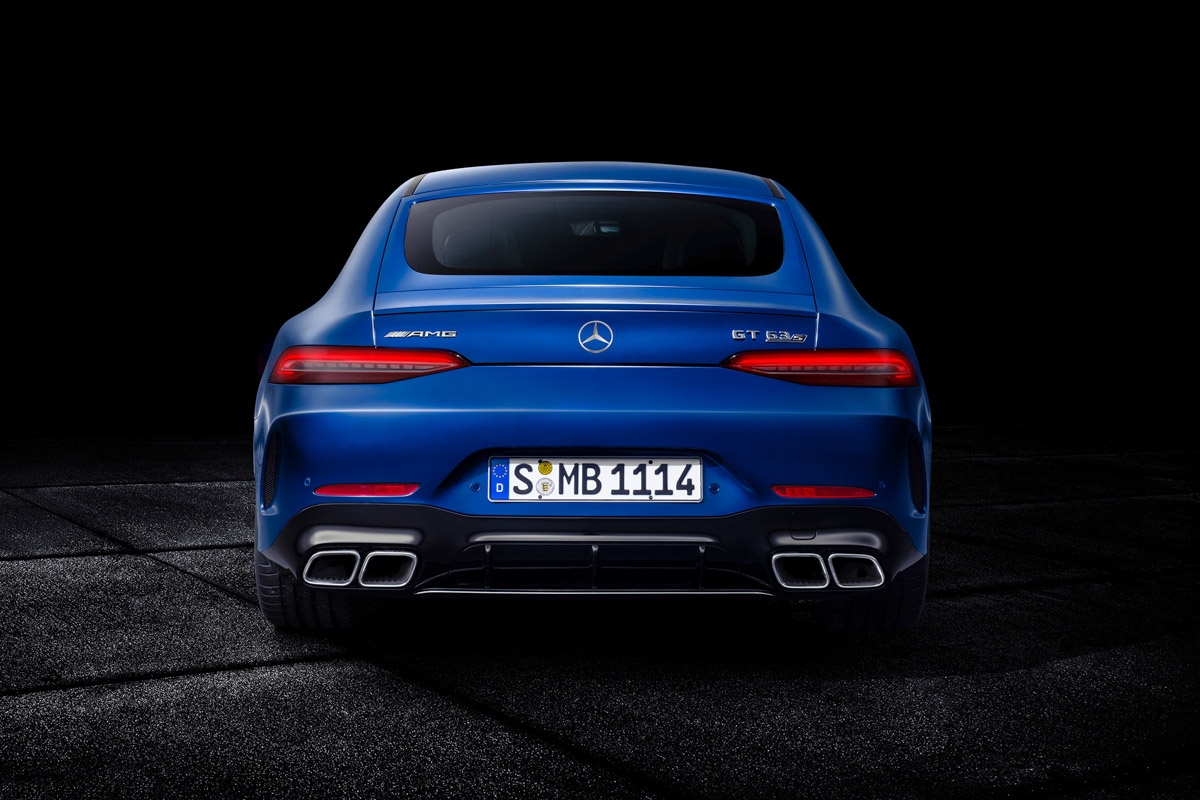 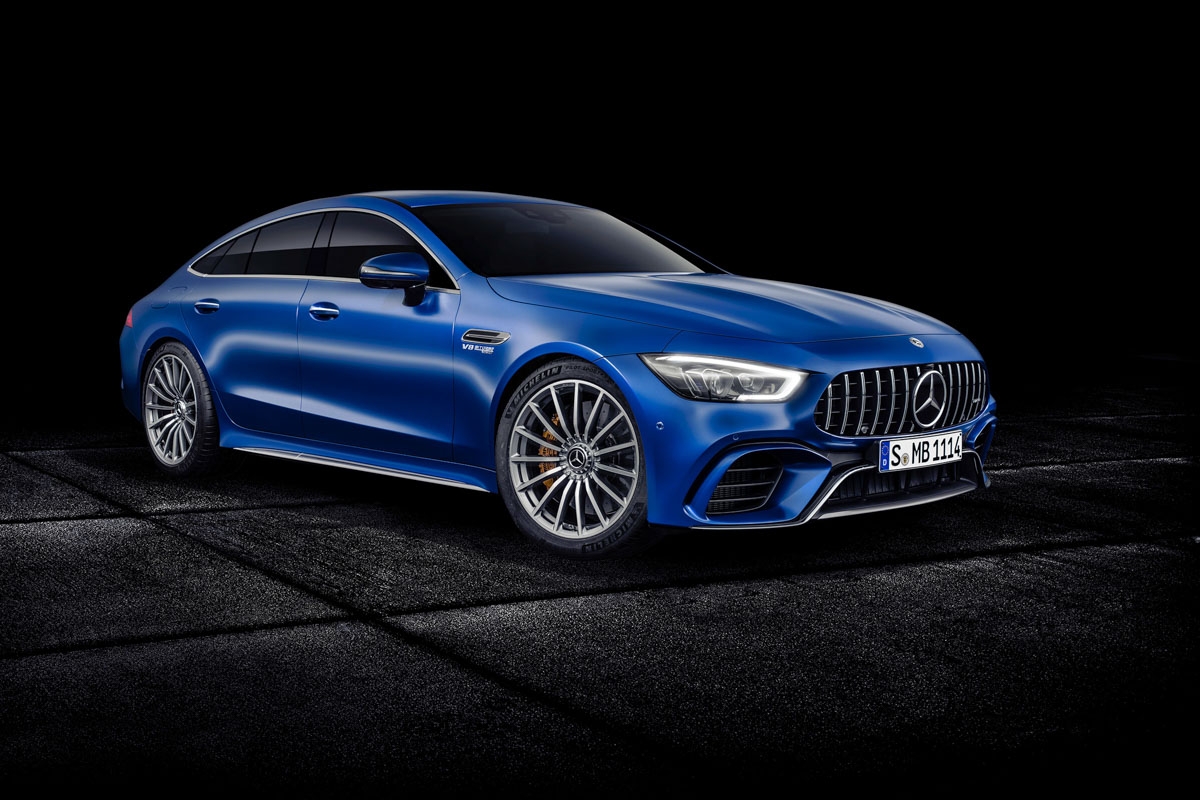 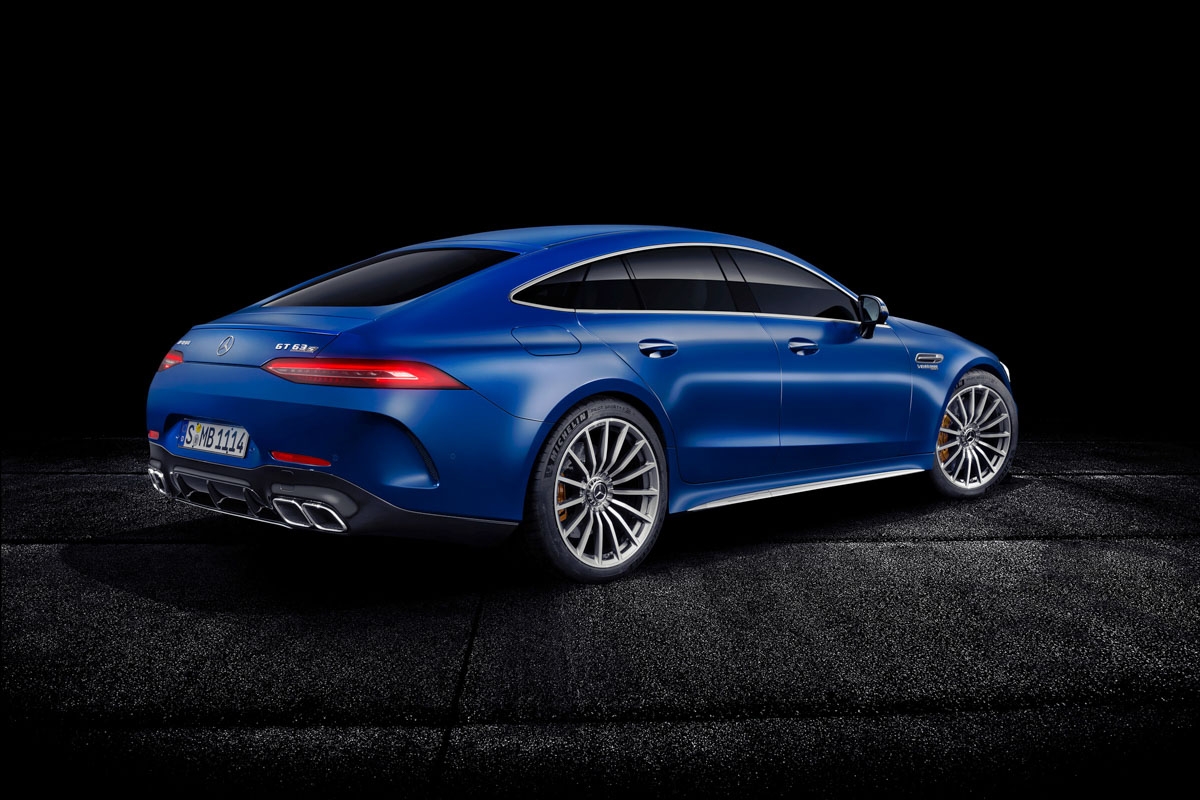 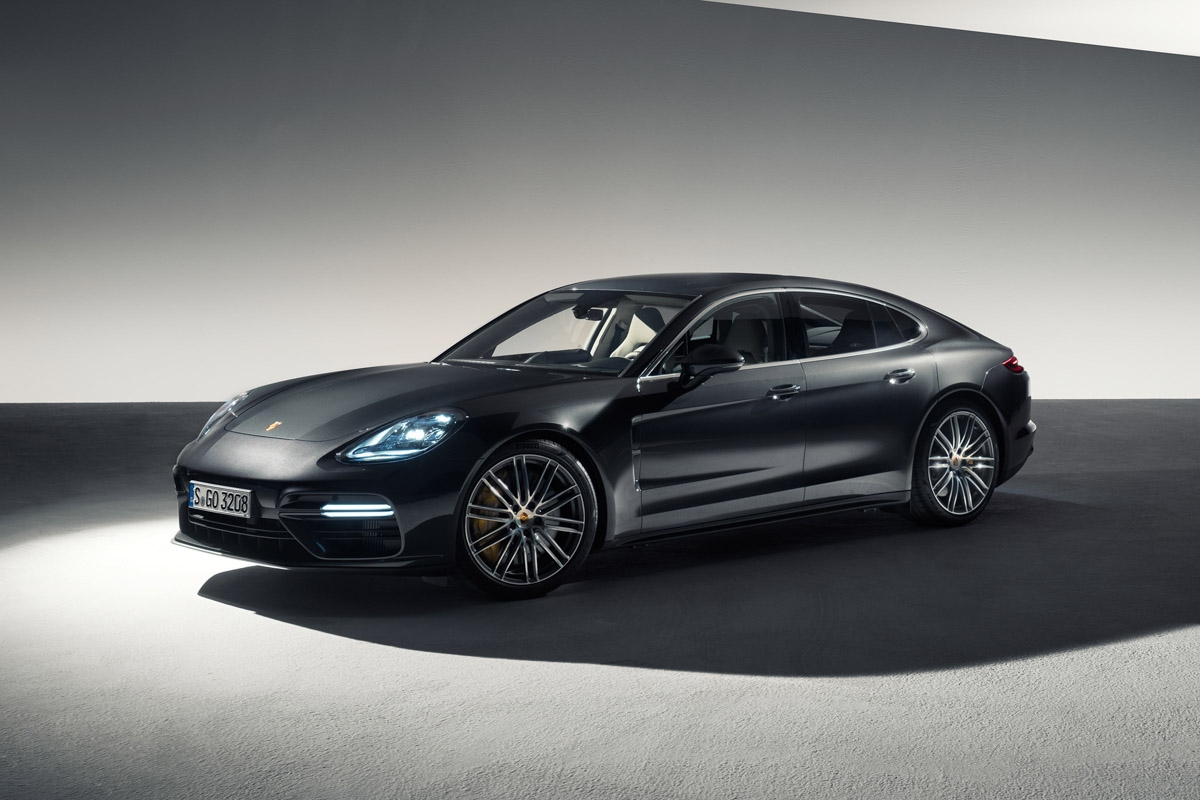 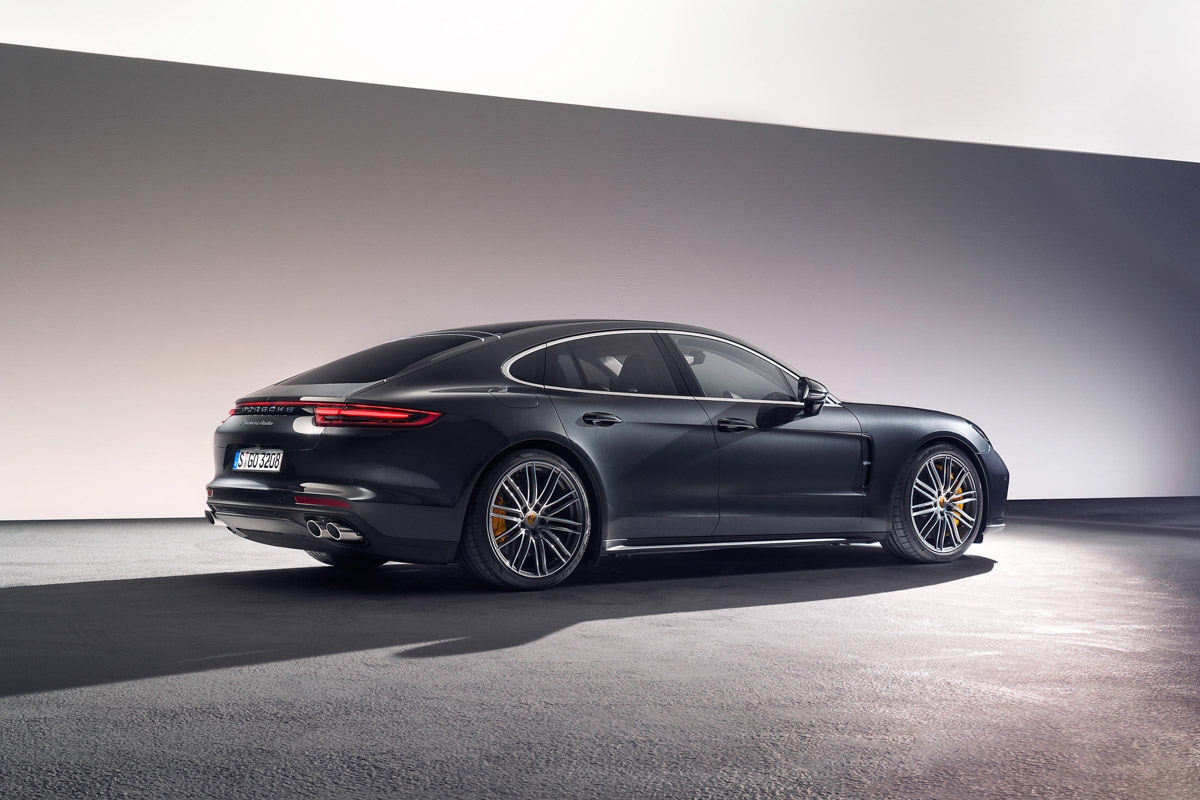 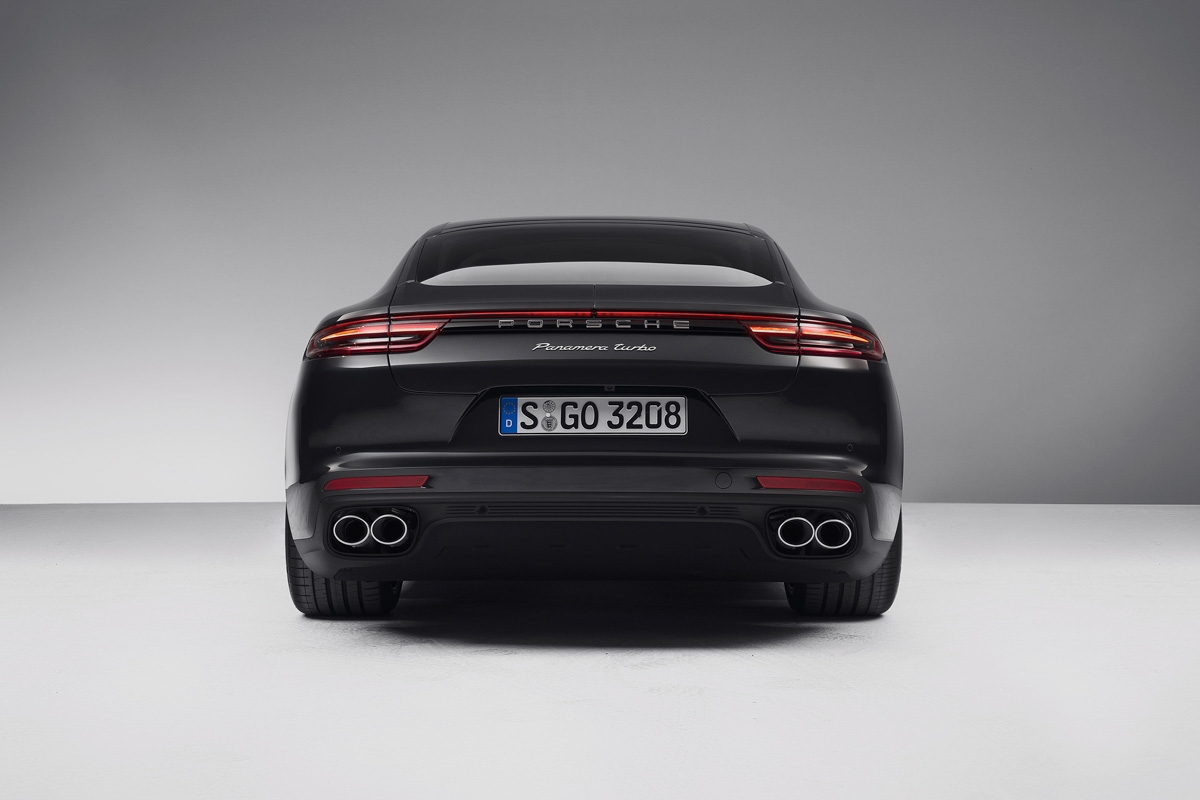 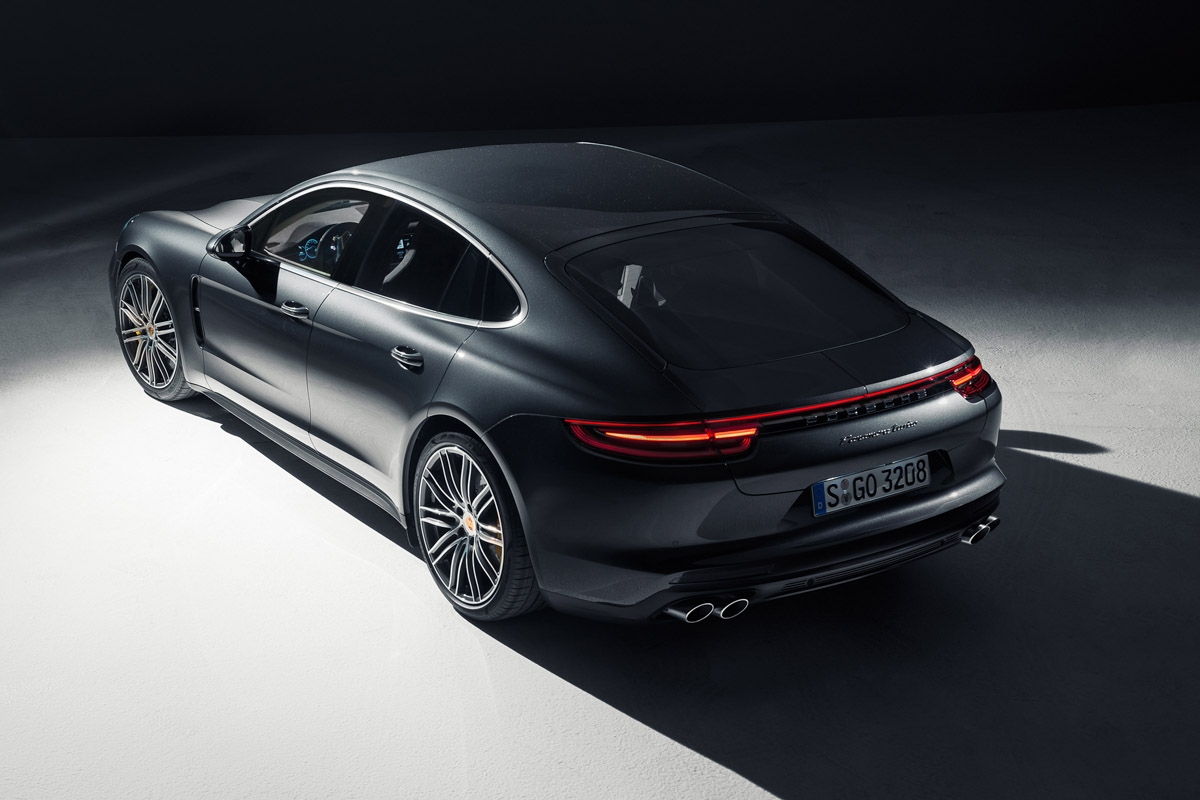 The Mercedes-AMG GT 4-door was not the car industry’s best kept secret before its recent reveal at the Geneva motor show. Shown in concept form and spotted in its test mule guise regularly over the previous 12 months, the GT 4-door has been developed by Mercedes-AMG to offer the Mercedes-AMG GT Coupe’s looks and performance in a more practical package.
One look at the spec sheet though and you’ll notice the 4-door comprehensively outguns its two-seater sibling in terms of performance and capability. Not only this, a closer look at the two also reveals that despite the shared nameplate and similar styling, the GT 4-door is based not on the aluminium space-frame chassis that underpins the GT coupe, but the MRA platform that Mercedes uses for the majority of its more humble saloons. So the question begs to be asked why Mercedes built the GT 4-door at all, especially when the CLS four-door coupe essentially does the same job. The answer might have something to do with the Porsche Panamera.
What started out as a strangely proportioned oddity, the Panamera has now come of age. Based on VAG’s new MSB platform co-developed by Porsche and Bentley, the second generation Panamera is now an important technical statement for the whole Volkswagen group. This is what Mercedes-AMG engineers have tasked themselves with usurping in a class that now sits above traditional super saloons like the E63, M5 and RS6. Here we’ll dissect the numbers before the AMG GT 4-door and the Porsche Panamera inevitably get pitched against each other on the road and track.

A key question asked when the GT 4-door was revealed was why Mercedes didn’t utilise the lighter, aluminum space-frame chassis that underpins the actual GT Coupe. After a conversation with Mercedes-AMG at the 2018 Geneva motor show, we now have a more transparent understanding of the thought process behind this decision.

One of the major reasons was Mercedes-AMG’s desire to fit all-wheel drive. The GT Coupe and Roadster both utilise a chassis designed to fit a transaxle dual-clutch gearbox mounted on the rear axle connected to the engine via a solid torque tube. This is done for improved weight distribution, and the ability to mount the V8 engine further back in the chassis giving the GT its classic long bonnet look and front/mid-mounted engine status.

Unfortunately, the task of then routing that power back to the front wheels is difficult when combined with a rear-mounted gearbox, as the power has to run back up a secondary driveshaft to reach the front axle. Manufacturers have overcome this problem before, Nissan notably with the GT-R, but then all manner of packaging problems arise, not least the need to raise the engine to allow the requisite components to reach the axle. Ferrari also encountered a similar issue in the FF and GTC4 Lusso, but rather than fitting a second driveshaft, it instead mounted a smaller, secondary gearbox to the front of the V12 engine, connected to its own two driveshafts.

In light of all this, Mercedes decided to base the AMG GT 4-door on the more typical MRA platform, with the engine and gearbox both front mounted and able to be more easily adapted to all-wheel drive. Mercedes-AMG has made the GT 4-door the lowest and widest MRA-based model yet to try and emulate the Coupe’s style, but you’ll see the crucial dash-to-axle ratio is much closer to normal Mercedes saloons and therefore lacks the Coupe’s dramatic proportions.

Porsche on the other hand had the chance to design and develop the Panamera’s MSB chassis from scratch, giving its engineers more freedom and flexibility. You can see this in the Panamera’s wide, low stance, something it shares with the new Bentley Continental GT and its upcoming four-door Flying Spur sibling. Here the Panamera’s V8 engine is mounted further back in the chassis as compared to something like the Audi A7 Sportback, which despite the similar shape and common parent company, is based on the MLB-evo platform which underpins everything from an Audi A4 to the Lamborghini Urus. Being based on the larger MSB platform, the Panamera gave Porsche a more specialised base to work from in its development, providing a slight leg-up against the Mercedes-AMG GT 4-door.

Let’s start by acknowledging that the specific models of this car are not perfectly lined up for this comparison. For the sake of equality, we’ll look at the most powerful, non-hybridised variant of each model – the Mercedes-AMG GT 63 S and the Porsche Panamera Turbo fitted with the Sport Chrono pack.

The Mercedes-AMG GT63 S 4-door shares the same basic 4-litre M178 twin-turbocharged V8 engine as the E63 S. The all-aluminium V8 is a 48v, ‘hot vee’ unit that mounts its turbochargers between the cylinder banks to increase throttle response times. This technique has been quickly adopted by many premium brands, thanks to its inherent performance and packaging advantages. Producing a maximum power output of 630bhp between 5500 and 6500rpm, the GT has a 27bhp power increase on the E63 S and is a solid 88bhp up on the Porsche. Torque is rated at 664lb ft produced between 2500-4500rpm another big 96lb ft gain on the Porsche.

The Porsche uses its own all-new 4-litre ‘hot vee’ V8 engine, this time shared widely within the VW group. This is the same unit that will eventually find its way into the Bentley Continental GT, future Audi RS 6 and RS 7 models, and has most recently been fitted to the Bentley Bentayga SUV. In the Panamera Turbo, power is 542bhp at 5750-6000rpm with 568lb ft of torque available between 1960-4500rpm.

The gearboxes connected to each also vary, the Porsche utilising an all-new 8-speed PDK dual-clutch gearbox that was introduced in the second generation Panamera. Like all dual-clutch gearboxes, the drive is transmitted via two input shafts that preselect gears facilitating razor sharp gearshifts and fast response times. The trade-off with dual clutch boxes can be a compromise in low-speed response and driveability thanks to the automated engagement and disengagement of a clutch.

The AMG uses a different type of gearbox all-together called MCT Sportshift. There has been some confusion about what this gearbox actually is, with some mistaking it for a dual-clutch. The acronym MCT stands for multi-clutch transmission, which means it uses a multi-clutch pack attached to a traditional automatic gearbox, replacing the torque converter. Here the multi-clutch pack handles the action of transmitting power to the gear-sets, but it only has one input shaft in contrast to the PDK’s two. The advantage of this gearbox setup is smoother low-speed operation and the ability to handle very high torque loads, but it does sacrifice shift speed and response.

As previously mentioned, both cars are exclusively all-wheel drive, with drive mostly sent to the rear wheels under normal driving situations and the car shifting power back up front when it deems necessary. Like the E63 S, the GT63 S also has a drift mode which allows the driver to disconnect the front axles completely, leaving it as a complete rear-drive car. As we have established with the E63 S in the past, it’s an entertaining, albeit pointless feature for most on the road.

Despite the original Panamera’s lukewarm reception when it was launched back in 2009, the notion of a large, long, luxurious hatchback has seemed to mature with age. Since the original Panamera, Audi has also cottoned onto the genre, while we have started seeing mainstream manufacturers offer new large premium hatchback options such as the Volkswagen Arteon and Kia Stinger.

Now in its second generation, the Panamera’s odd styling has evolved into a more resolved package, punctuated by Porsche’s trademark styling elements such as a full-width rear light bar and its quad-LED daytime running light motif. Inside the cabin, Porsche fits only four seats inside (five seater Sport-Turismo versions notwithstanding) but rear space is impressive for such a low, sporty car.

The AMG GT 4-door shares a similar silhouette to the Panamera, with a long bonnet and sloping roofline defining the shape. The GT Coupe’s shapes and detailing have been applied, with more wedge and fuller, more muscular surfacing than the new, comparatively dainty looking CLS. The GT 4-door is very angle sensitive, sometimes viewing the car at an odd angle can make it look unpleasantly tall, especially around the back. In the metal the AMG does look more resolved, and definitely a rival for the Panamera in the Golf course car park.

Inside a combination of AMG GT coupe and CLS elements appear, the 4-door sharing the dual-screen setup and upper dash with the latter along with a more GT inspired centre console, drive mode switches and gear selector.

Both Porsche and Mercedes-AMG have positioned these hatchbacks as their flagship performance offerings if you need four seats. As a result, both will march further upwards in terms of specs and performance, but will do so through hybridisation. Porsche has already introduced two hybrid variants of the Panamera to the market, including the e-Hybrid and the Turbo S e-Hybrid. The latter is the one we are more interested in here, as although the Turbo may concede quite a lot in power and torque terms to the AMG, the Turbo S e-Hybridbounces back with 670bhp and 627lb ft of torque.

AMG’s initial GT 4-Door concept from last year’s show also included a hybridised V8 powertrain, here producing a combined 793bhp. We suspect that this engine option will eventually find its way into the production GT 4-door. For now though, AMG’s entry level GT53 utilises a mild-hybrid in-line-six cylinder powertrain that we have already driven in the latest CLS. This should compete with the Panamera S rather than the e-Hybrid due to its combined power output and the fact it is unable to drive on electric power alone for extended periods like the Porsche.

No longer based on more humble executive saloons, these highly strung, luxurious performance hatchbacks can start making use of higher specification underpinnings to manage these huge power outputs. This is what puts them in a class above cars like the E63 S and BMW M5, that and the predictably premium asking prices.