Even when at the mercy of my already frayed temper, the slightly larger track-ed rear end simply refuses to budge as I flick-flack through the canyons at the start of the route (once Arun’s got the first few shots under his belt at least). A brave pill, less traffic, a bootful with the AMG Dynamic Select drive mode set to Sport +, and only limited traction control should change that. Through these tight confines, this AMG is proving incredibly agile. And, with the performance exhaust system set to ear-bleeding levels as it bounces off the rock walls, the sound is ungodly.

It’s a similarly theatrical experience on the inside. While the low slung confines of the ‘greenhouse’ cabin and bulky A-pillars mean visibility could be better, the taut suspension and lumbar supportive sport seats could offer more pliancy for a ‘GT’ car, and some of the silver trim about the dashboard neither looks nor feels as refined as we’d expect from a Mercedes. But the eight-buttoned V-formation on the centre console is a stirring sight, as is the tablet-like screen rising above the four cylindrical air vents and the Alcantara-lined flat-bottomed steering wheel. It all combines to particularly enchanting effect. Having said that, I’d dearly love to meet the madman who thought placing the hazard warning light switch on the roof was in any way a sensible idea. 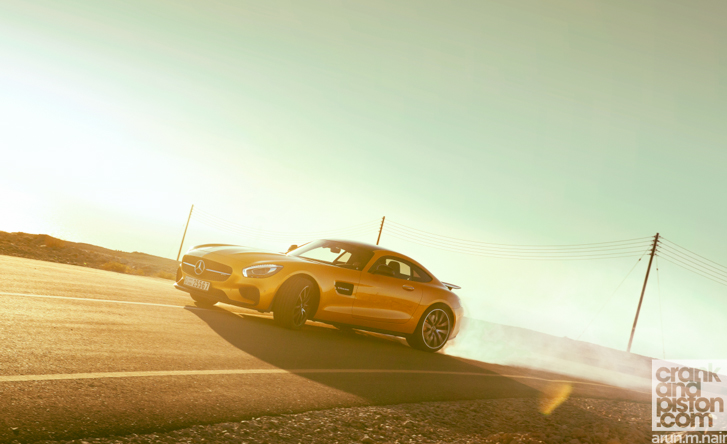 Canyon walls soon turn to open air, and a stunning, 50ft drop down into the azure blue waters. It’s been some time since I’ve seen this view, and I can’t help but catch my breath: oh to have those impounded camera bodies with us here, now. Slightly further back, and for reasons that escape me, the Tucson camera car has somehow managed to get itself into a race with a local driver. Whether this is down to the impetuous spirit of my colleagues getting the best of them on this road of roads, or the tailgating Lexus saloon scything perilously close to their bumper and seemingly offering very little concern for their welfare alongside sheer drops into the Arabian Gulf, I’m not too sure. I have my suspicions though, validated moments later by said maniac – having eradicated his microscopic patience – crossing lanes onto the wrong side of the road around a blind corner in his efforts to get past the Tucson. Quite how the oncoming Toyota pick-up managed to avoid what seemed like an inevitable smash we shall never know…

Moronic road users though are but a blip on the radar – albeit an irritating one – as we continue our drive next to the water, and the asphalt begins winding even tighter to the cliff-face en-route to Khasab, the AMG GT S really begins to come into its own.

There is no trace of understeer, for instance. Not even a hint of it. The position of the V8 (set right back against the bulkhead as it is), the low centre of gravity and stellar grip from the tyres make it next to impossible to lean too heavily on the front end into the corners. Of course we shouldn’t dismiss the role of that aluminium spaceframe: borrowed in essence from the SLS AMG Black and weighing just 231kg, it brings the GT’s overall kerb weight down to 1570kg and provides a much longer and wider platform, allowing the GT S to corner so beautifully flat. While the AMG GT may not be as precise as a Porsche 911, it’s still stunningly composed through the turns, the rear end again only tweaking sideways if I really stand on the loud pedal. It’s so unlike the brash, tail-happy AMGs I’ve experienced in the past. 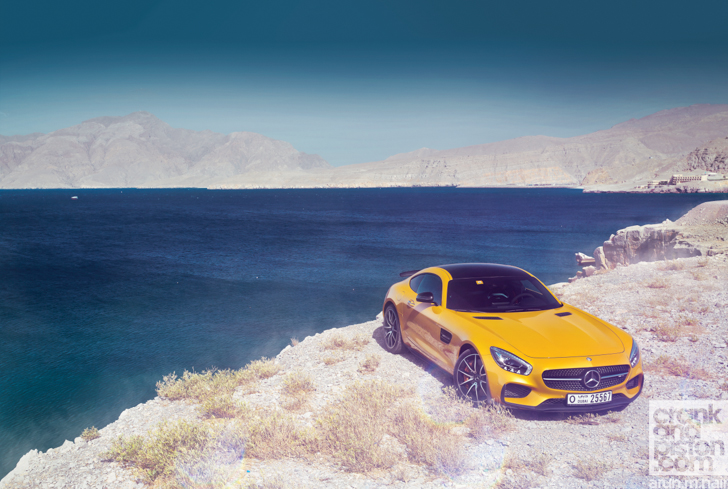 If there is one criticism, aside from the overly-stiff ride quality, it’s the steering. It’s enormously precise, despite the sheer size of the bonnet stretching out in front of me, and the grip from the front tyres borders on insane. But there’s not an inordinate amount of feel that’s coming through either, the somewhat darting tendency of the front end taking a little time to dial in. Weight shift under cornering though is beautifully subtle. Even as the speed continues to rise, this poise remains unaffected by the undulations of the road, and it’s not long before the azure waters disappear and a multitude of fascinated onlookers spy a Sunbeam AMG rolling through Khasab.

Turns out $172K sports cars are not the most common of sites in Khasab, a quaint little town – port adjacent – more indicative of Middle Eastern rural life than Dubai’s more bustling metropolis. Indeed, while the AMG GT had barely registered on our highway run to the Oman borer, our Sunbeam model is now a prime target for iPhone shots as we cruise through town (the Tucson by comparison barely registering). Even the local police force, clearly amused by our presence, keeps a watchful eye in the circulating Nissan Patrol. It does make me wonder if our friend in the Lexus saloon made it this far…

After our adrenaline pumping drive up, down and round the mountain, I’m staggered. In developing its new sports car, Mercedes has clearly opted against challenging the Ferraris and Lamborghinis of this world to take the fight directly to Porsche. And there’s no doubt, thanks to the GT’s composure and agility through the turns, that Mercedes has worked wonders. Comfort and practicality may not quite be to the level that a ‘GT’ badge would suggest, but let’s not get bogged down with nomenclature. Give or take a little more feel through the steering, the GT S is a stunning machine to both look at and pilot.

And, as it turns out, keep you occupied at border control. Perhaps not what Mercedes had in mind.