Why would any sane petrolhead opt for a cabriolet over a performance coupe? When it comes to the new Mercedes-AMG C 63 S Cabriolet, crankandpiston.com can think of a few reasons…

I can see a lot of you right now. You’re making dismissive noises and wondering why any petrolhead in their right mind would go for a convertible when a coupe provides better structural rigidity and therefore better performance. After all, these cars are built and sold at considerable cost on the basis of their tarmac-curling ballistics, so why would you want to scupper the dynamics by ripping the roof off and replace it with canvas?

Well, I’ll tell you the main reason why you’d want the Mercedes-AMG C 63 S Cabriolet over the coupe. The noise.

The caveat to this recommendation is if you intend to use your C63 S on the track, where the limits of performance can be played with and the engineering by Mercedes’ tuning department can be appreciated to the fullest extent. In those circumstances, then your accurate summation of engineering science is perfectly justified, and you’ll probably want to opt for the stiffest C 63 you can get.

But if, like the majority of customers for this car, you want a machine for the road, then the cab is the one to go for, because never in a million years will you be able to exploit its dynamic potential on the road. It’s got 503bhp from a 4-litre, twin-turbo V8 and will hit 100kph in a vicious 4.1 seconds. The public road is no place to find the outright limits of a car like this. 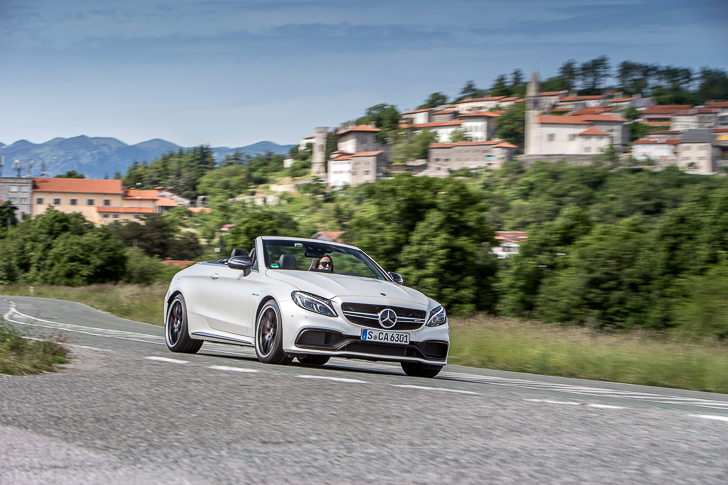 Interesting. So the performance is that potent?

Well, realistically, you’ll be operating in a restricted window of performance, and outright stats are not what you should be paying attention to. For a performance car to be engaging on the road, it’s about the senses. What you feel, what you hear. What you hear with the Mercedes-AMG C 63 S Cabriolet, with its canvas roof stowed safely away, is one of the greatest aural pleasures in motoring; a live performance by AMG’s world-class metallic orchestra. There’s a full fanfare on acceleration and on lift off, shifting down through the seven-speed automatic, a rat-a-tat-tat of snare drums and crackles. For that reason alone, it’s something to be highly recommended.

Obviously, that’s not the only thing to like. The C63 S Cabriolet is based on the coupe, but in removing the tin top and fitting a folding soft roof, AMG has added stiffness to the A-pillars and various other parts of the body. The result is a car that’s 125kg heavier than the Coupe at 1925kg, but doesn’t feel unwieldy on the road. The steering is sharp, the optional ceramic brakes firm and insistent.

At pace on the twisty, lumpy roads through the hills of eastern Slovenia, the C63 S dances nimbly from crest to apex, skipping over undulations with unruffled composure as the adaptive dampers rebound quickly to find adhesion on each corner. The result is an easily accessible rhythm, with just enough give in the suspension to make it a doddle to fine-tune of the nose with the right foot. It’s not hard to push on in the C63 S Cab and feel quickly at home. 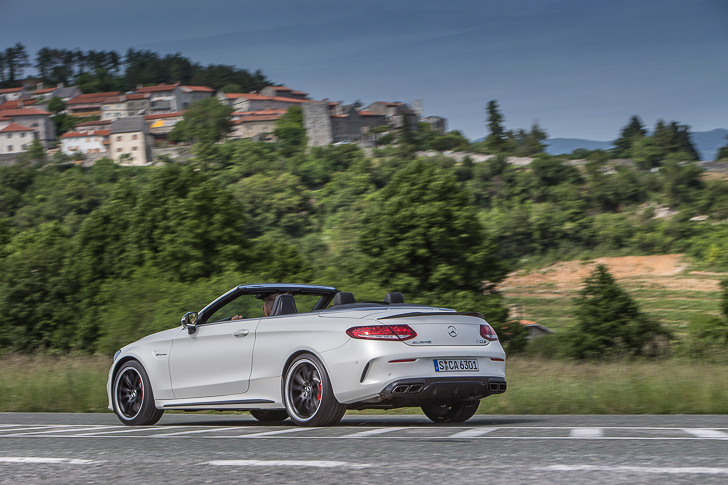 The only sense of intimidation comes when the roads aren’t dry. 503bhp through the rear wheels is a lot, even if it’s relatively commonplace these days, and with all settings set to Race there’s a generous amount of room to play from the traction and electronic stability controls. Become over eager to fire out of tighter bends and the rear Michelins will lose adhesion quickly. Quick hands will bring things back without too much bother, but it’s a reminder that despite its relatively civilised appearance, there’s genuine savagery under the bonnet.

End up on the motorway, or get stuck in traffic, and the technology also found in the standard C-Class (by way of the S-Class) brings back that civility and a cutting edge to proceedings. Adaptive cruise control and a faintly unnerving auto-steering function combine to bring occupants within touching distance of autonomous motoring. All the functions can be ignored if you’re a traditionalist, but there’s a new type of attraction in surrendering to inevitable drops in adrenaline and becoming the operator of a sophisticated machine. Judging where to draw a line between automation and manual intervention makes for an interesting diversion from the monotony of crawling, slow-speed delay. The interior is up to usual Mercedes standards, so comfort abounds when the excitement drops.

Despite this generous helping of technology, the Mercedes-AMG C 63 S Cabriolet offers a sensory experience all-too-often lacking in modern motoring. It might not rival cars of yesteryear through the hands or seat, but when the boys and girls at Affalterbach fit their creation with such a glorious exhaust and a removable roof, you have a drive that’s cutting edge and timeless at the same time.

Did you enjoy our Mercedes-AMG C 63 S Cabriolet review?