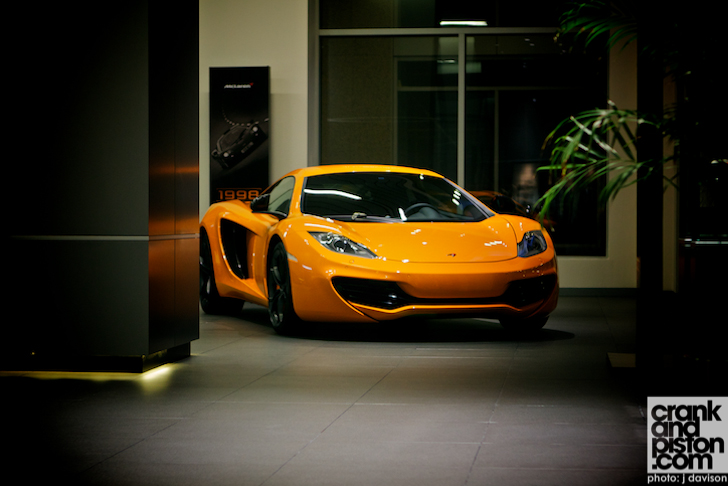 “Lights! Lights! We need more lights!” is an oft-used plea by any photographer. So you can imagine the bemusement at McLaren Middle East recently when I phoned up to ask if I could shoot the marque’s Dubai showroom and the cars on display therein…at night. Had I mentioned during this preliminary call that my plan was to turn off most of the showroom lights as well, no doubt the head scratching would have picked up apace. 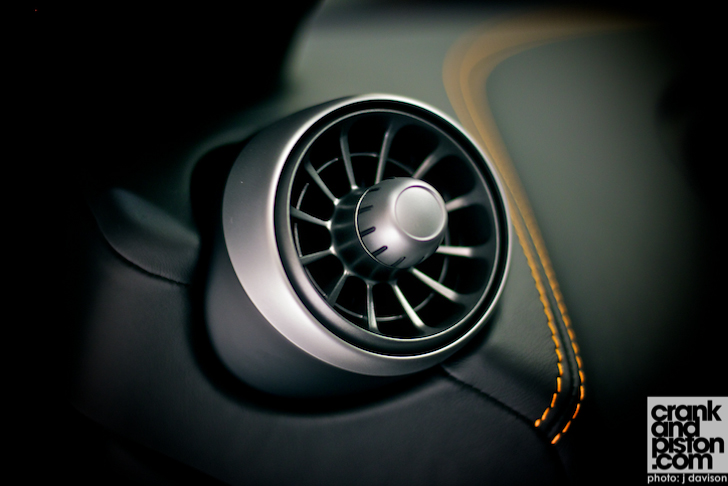 Even now, as I make my way to McLaren at a not-unreasonable 8pm, my plan is still somewhat unclear. Perhaps when the idea first came about I was looking to try something new: my anarchist reaction to the beautifully lit and massively photoshopped images of the McLaren MP4-12C that abound in magazines and on the interwebs. Then again, the idea of sneaking around a supercar showroom at night like a stealth ninja also greatly appeals to my inner idiot. 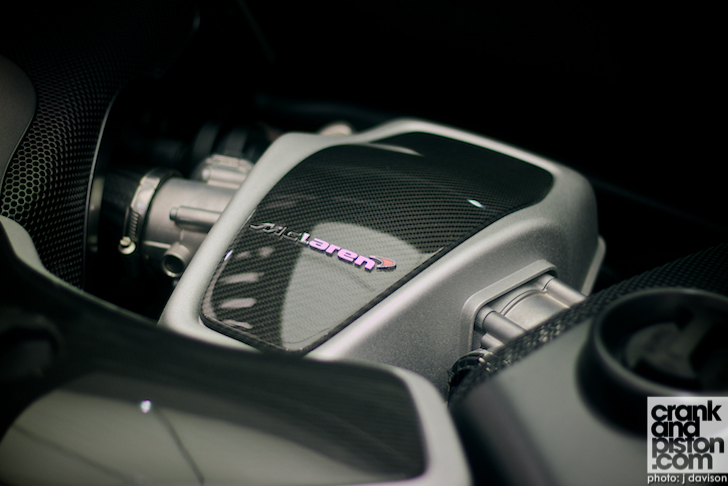 Suitably dressed in black and with the poise of a panther, I am immediately detected upon arrival by two burly security guards: in hindsight, stalking around the property like a large cat under the still very bright showroom lights was probably not my finest moment. Fortunately Michelle – the McLaren PR representative – is on hand to persuade both guards to let go of my shirt collar and put me back on the ground. I escape with barely a scratch and follow Michelle through the main doors. 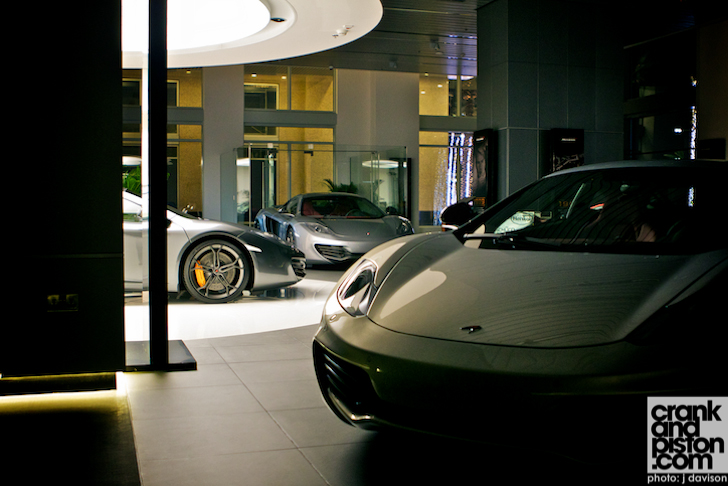 The showroom itself is a marvel of minimalism. Function dictates form at McLaren and this ethos has been carried through from their car design to every aspect of the ‘McLaren look’. There is, however, an expensive-looking central light feature that I nominate to leave on during my brief experiments with lighting. With both Michelle and the security guards looking a little perplexed, I set to work. 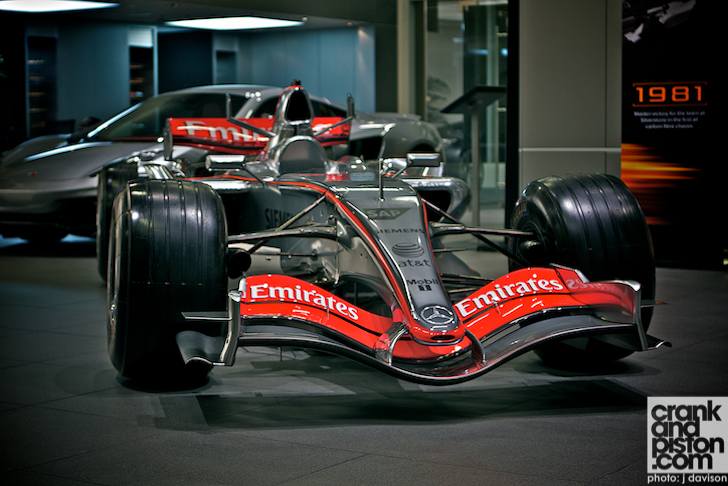 It is the Formula One car that immediately draws my attention. It is a rare thing to get up close and personal to a McLaren F1 car and not have security personnel breathing down your neck (though I do keep throwing a glance over shoulder every now and then). This particular car is an MP4-21, which was raced by Kimi Räikkönen during the 2006 season and sits resplendent centre stage with its chrome livery and suitably appropriate Emirates sponsorship. 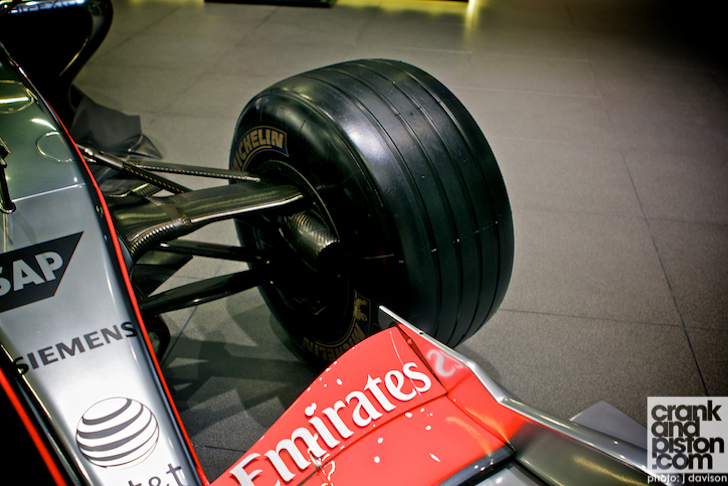 The MP4-21 was the last of the Adrian Newey designed-F1 cars for McLaren before his switch to Red Bull Racing, marking the end of an era after his near-decade of service at Woking. The keen-eyed F1 aficionados amongst you will also have noticed the period correct chunky Michelin tyres, a final curtain call for the French firm who left the series at the end of 2006. 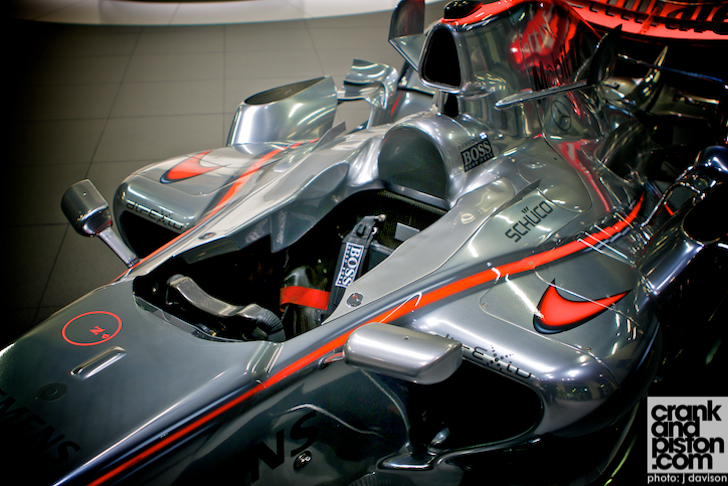 Caught up in the moment, I consider clambering on board but there are a few things preventing me. Firstly, I am not sure if I will fit in the confined cockpit, and getting stuck would be an embarrassing predicament to get myself in to. Secondly, I have no idea how to release the steering wheel, which I know needs to be removed to gain access. Last, and not least, I have the sneaking suspicion that security is probably still watching me on the CCTV cameras. 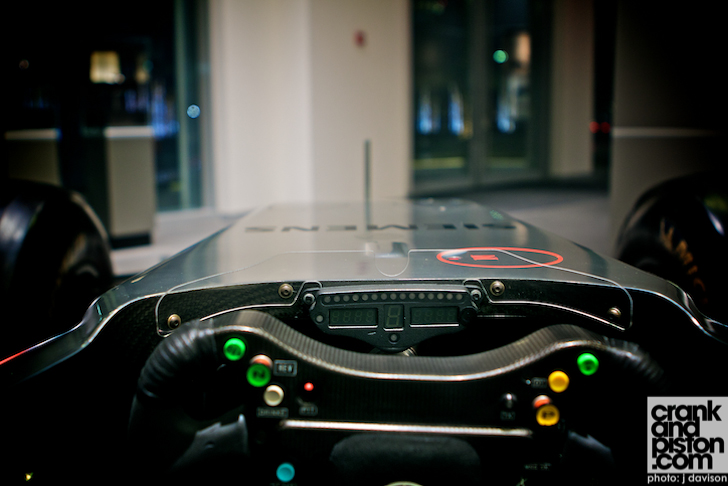 Professional composure regained, I decide that it is best if I simply hold my camera in the exact location where the driver’s head would have been. With a Räikkönen-eye view shot achieved, it’s time to move along before my childish eagerness to sit in the car becomes too much to resist.

Previous ArticleBMW 325 E30. Out Of The Ordinary
Next Article The Bentley Suite. Vrooom Service