In 1970 at Goodwood, the world lost former 24 Hours of Le Mans winner Bruce McLaren during a test session of a Can-Am-spec M8D, a car that – ironically – would secure his team its fifth successive series title, a record that would never be beaten. Two years earlier, the team owner/driver took another record by securing a Formula 1 victory – the 1968 Belgian Grand Prix – in a car baring his own name, the first driver ever to do so. And two years before that, Bruce McLaren Motor Racing was born on the streets of Monte Carlo in 1966.

As debut F1 races go, it wasn’t the easiest of starts. Given that scenes from the race would later be used in John Frankenheimer’s movie Grand Prix, Bruce’s eponymous outfit would debut not in the traditional green, black and silver of his native New Zealand, but instead in the white and green livery of the fictional Yamura team the M2B depicted in the film. All hope of a strong finish went downhill along with the Ford engine’s oil pressure however, with only nine laps in the books. Oddly enough though, the team’s Monaco debut would form part of another series record, with only four classified finishers marking the lowest ever for an F1 race, before or since. 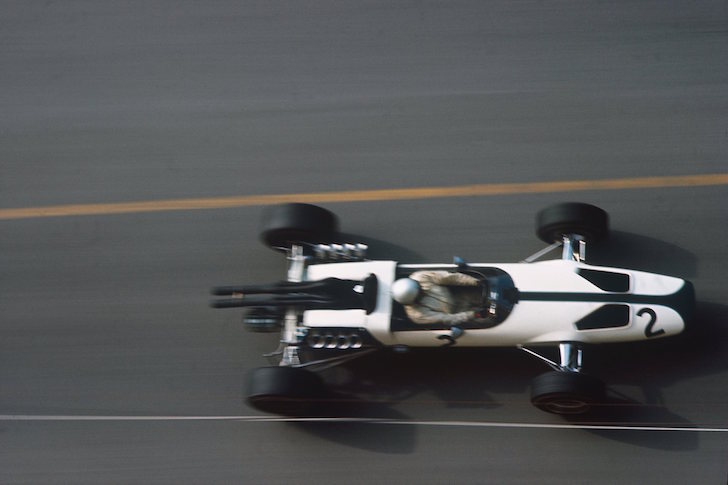 50 years later and amidst a sea of ups and downs for the McLaren Team, Monaco was once again proved troublesome. Even though 5th for Fernando Alonso and 9th for Jenson Button marked the first double points score for the team in 2016, it’s a notable difference to the ‘06/’07 and ‘09 wins for both drivers and McLaren’s amassed 15 victories. Not exactly the 50th birthday present McLaren was hoping for in 2016.

Saying that, the road-going division has taken time to celebrate its bicentennial with a specially liveried 570S, which dons the white paintwork with central green stripe first seen on the M2B (with presumably the white and red of Marlboro being lined up for the team’s 75th anniversary). Of course mechanically, nothing has changed, the McLaren 570S retaining its 3.8-litre twin-turbo V8, 562bhp and 443lb ft power figures, as well as its 328kph top speed. It’s a fitting nod to an extraordinary team career though, which to date includes 12 and seven Formula 1 Driver’s and Constructor’s championships, 182 F1 victories and 155 pole positions, and some of the most memorable moments the sport has seen. I’ll let Richard Mille take it from here…