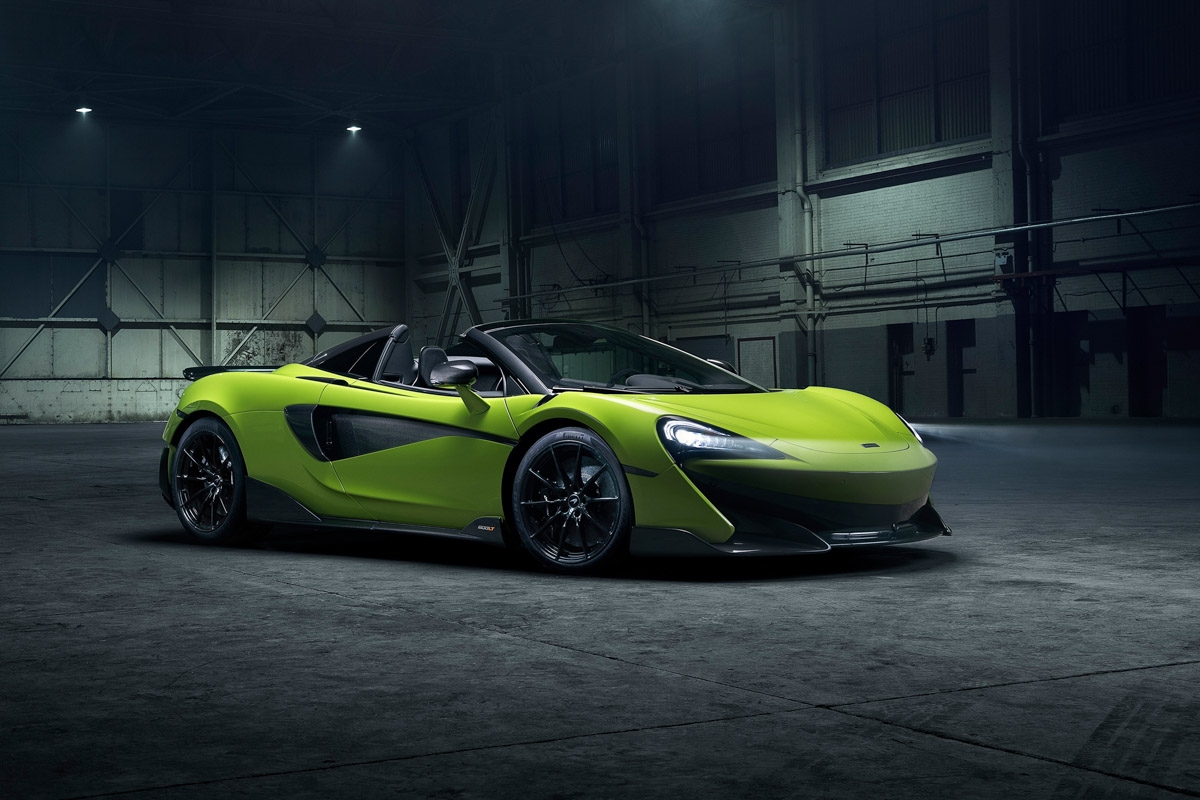 McLaren has revealed a new Spider version of its rather excellent 600LT, aiming to offer the same scintillating driving experience as the coupe but with extra exposure to the elements. The package doesn’t deviate far from the coupe, and with McLaren’s carbonfibre tub usually ensuring little-to-no compromise dynamically when the roof goes walkabout, the 600LT should impress just as much as the coupe.

The 600LT Spider’s powertrain is identical to that of the coupe, featuring a 3799cc twin-turbocharged V8 engine producing 592bhp at 7500rpm, with 457lb ft of torque spread between 5500 and 6500rpm. As with all McLaren V8s, it features a flat-plane crank, is dry sumped, and in the 600LT it revs to a 8500rpm limit. Shifting is taken care of via a seven-speed dual-clutch transmission, operated via paddle shifters situated behind the wheel on a single rocker. Like all other McLarens, there is no locking rear differential, rather a brake-steer system operated with the braking system.

Under the skin is McLaren’s MonoCell II carbonfibre tub chassis, with a combination of forged double wishbone suspension at all four corners and revised subframes borrowed from the coupe bolted to either end. As a ‘Sports Series’ McLaren, it does without the clever hydraulically linked Pro Chassis Control suspension system, instead utilising a traditional set of anti-roll bars and adaptive dampers. The 600LT’s tub chassis requires no additional strengthening in its conversion to Spider application, meaning weight is only up 50kg to a total of 1297kg dry.

The 600LT’s aerodynamics have also been largely unaffected by the loss of it’s fixed roof, the Spider still featuring the stacked rear wing and aggressive splitter and diffuser of the coupe. The roof is taken straight from other open-top ‘Sport Series’ models, comprising a folding hardtop that will drop below a tonneau which is situated between the two fixed buttresses. A small glass rear window is able to be operated independently of the roof, meaning it can be left in place with the roof down to act as a wind deflector, or lowered with the roof up so owners can singe the hairs from the back of their necks from the flamethrower exhausts – if they’re that way inclined.

If you’re a fan of the 600LT’s aggressive GTE racer-like appearance, the Spider will probably be to your liking too. Buyers will have a choice of two different wheel designs in various finishes, as well as McLaren’s increasingly vibrant mix of exterior body colours. If you want to take the 600LT Spider’s personalisation one step further, McLaren Special Operations will gladly paint, stitch, or upholster any colour and finish you might desire, so long as your wallet can handle it.