McLaren 570GT Sport Pack review – the best of both worlds

McLaren’s GT car gains the dynamic set-up of the 570S coupe and is even better for it. 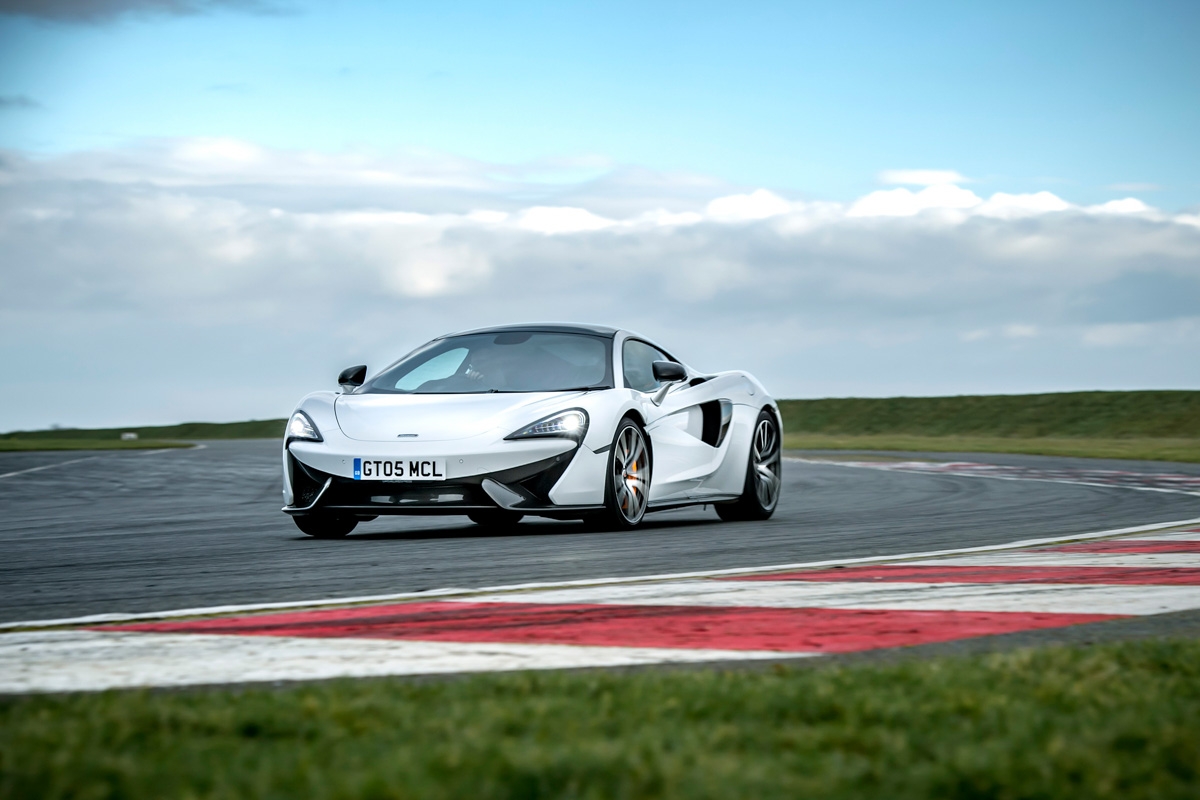 Pro – Gains the dynamic ability of the 570S

McLaren’s 570GT is meant to be the restrained member of the Sports Series family, with its softer suspension settings, revised steering ratio and more accommodating ESC stability control setting. But considering it still produces 562bhp, reaches 100kph in 3.4 seconds and tops 328kph, it’s much more a supercar than a GT car. Despite the addition of its Series 1 Jaguar E-type-style opening rear hatch and additional luggage space, we consider the 570GT a more practical supercar rather than a GT, be it one that’s brilliantly capable at being the latter, too.

Now McLaren has decided, after a number of customer requests, to offer the 570GT with an identical dynamic configuration as both the 570S Coupe and Spider in the form of a Sport Pack, which adds $6,700 to the GT’s $217,500 price tag.

By selecting the Sport Pack nothing changes over your shoulder in the 570GT’s engine compartment. The M838TE, 3.8-litre twin-turbocharged V8 remains untouched, which means 562bhp at 7,500rpm and 443lb ft of torque available from 5,000rpm through to 6500rpm.

Its 1486kg kerb weight is now 9kg lighter than earlier GTs thanks to the now standard-fit carbon-ceramic brakes. It will complete the quarter-mile in 11.1sec. Just as impressive are the stopping distances: 133 metres from 200kph and 33 metres from 100kph.

McLaren’s 570GT Sport Pack consists of a revised steering ratio, returning it to the same as that of the 570S and Spider and therefore doing away with the two per cent reduction McLaren engineered into the standard GT. The spring and damper rates of the GT were also softened by 15 and 10 per cent front-to-rear when the car was introduced, but for the Sport Pack these are returned to the same spec as coupe and convertible models, with the adaptive dampers recalibrated to suit. The ESC stability control has also been reconfigured to match and perform as per the other pair of Sports Series models.

The 570GT is now fitted with carbon-ceramic brakes, with six and four-pot front and rear calipers as standard. The 19-inch (front) and 20-inch (rear) wheels come with Pirelli’s P Zero Corsa tyre fitted as standard, too. The 10-spoke lightweight forged wheels (super-lightweight in McLaren speak) and orange brake calipers of our test car were both options ($4,930 and $1,260 respectively). If you wish to make your Sport Pack-equipped GT stand out from run-of-the-mill GT models, you’ll need to continue on the configurator, as McLaren’s press office did with our test car, adding the following: Carbon Fibre Pack 1 ($4,480, adding carbon side intakes and mirrors), Carbon Fibre Pack 2 ($12,150 for carbon aero blades, side skirts and rear diffuser) and a $14,000 MSO-defined carbon exterior pack consisting of a carbon front splitter, rear bumper and spoiler. A sports exhaust will set you back $4,670.

Unsurprisingly, it now drives like a 570S Coupe with a convenient luggage compartment.  The change to the steering ratio means this spec of 570GT sniffs out cambers and tugs at your forearms more than a regular GT, but no more so than a 570S.

The ride is a little tougher, with rough edges giving the MonoCell II carbon tub a tougher workout compared to a regular GT, but the changes require you to have stepped from a 570GT to a GT Sport Pack to really notice. But it’s lost none of the Super Series trademark comfort when the dampers are left in Normal mode, and when you switch to Sport that comfort equates to pliancy and a level of unexpected suppleness, the car continuing that McLaren trait of seemingly floating over bumps and imperfections rather than driving over them. Where the Sport Pack delivers a genuine benefit is when you reach into the 570’s performance, either on road or on track.

Up the ante on the road and the Sport Pack allows the front tyres to form a stronger purchase with the surface on turn in, with little discernable roll adding to the urgency and precision in which it heads to the apex. A two per cent change in steering ratio doesn’t sound much, and the most noticeable difference to our hands is how a regular GT is more composed on poorly cambered road. With the Sport Pack, it immediately stirs any memories you may have of piloting a 570S as you feel the chassis load and the car connect with you as you begin to work the balance front to rear, its steering so naturally crisp and linear in its action.

Head on track and start to push harder and the GT Sport Pack is pure 570S. There’s great grip to work with when you commit hard on turn-in, that balance and low-roll centre is there for the taking, and despite the lack of a rear-differential, the throttle and the rear tyres can be made to work together to deliver devastating corner exit speeds. It will even play over the limit, although you still need to exercise caution should you stir the V8 too abruptly and to avoid being caught out by a handful of unexpected torque arriving at the rear Pirellis.

As per the 570S, the GT Sport Pack is remarkably progressive as you play around its limits on both road and track, installing a level of confidence quite unexpected of a turbocharged, mid-engined supercar.

Tricky one this, but we’ll probably stick with the Audi R8 V10 Plus and Porsche’s ubiquitous 911 Turbo S, and you might also want to consider the Mercedes-AMG GT S, but we fear it may struggle against such a dynamically superior car. Of the four, it’s the McLaren that enthrals and engages the most. Aston’s DB11 and Bentley’s new Continental GT? Neither would have a clue what way the Macca went. Then again, the former two are pure GT cars, the McLaren a GT supercar.