Let’s not beat around the bush. You all know what this is, you know what it’s replaced, you know what it’s going up against, and (presumably) you already know what power it chucks out. So rather than spend 300 words fannying about with an introduction to the Lamborghini Huracán, let’s get stuck in.

Obligatory model history – After an impressive 11 years as Lambo’s baby model – and with 14,000 sales under its belt – the Gallardo has been retired, the Huracán stepping in as the meaner, badder prodigal son. Quite an act to follow…

Keys rivals – Ferrari 458 and McLaren 650S, with perhaps a snifter of a challenge swooping in from the Porsche 911 Turbo and sister company Audi with the R8.

Appearance – In short, breathtaking. The Aventador-esque batshit-ness remains on the outside courtesy of that air intake-y front bumper, the carbon fibre grille between the rear lights, and quad-pipe exhausts. But there’s a more rounded look to the front end and some slightly less aggressively carved cooling vents across the rear wheel arches to help the Huracán step out of big brother’s shadow. The 20-inch Pirelli clad alloys are pretty sharp too.

On the inside? – Orange. Lots and lots of orange, in-keeping with the (ahem) pearl effect Arancio Borealis paint finish. Try to keep your retinas attached though, since the funky window/hazard warning light switches on the centre console, the ‘handle’ in place of reverse gear, and the red panel you need to flick up to press the Stop/Start button offer the insanity expected of any Lamborghini. 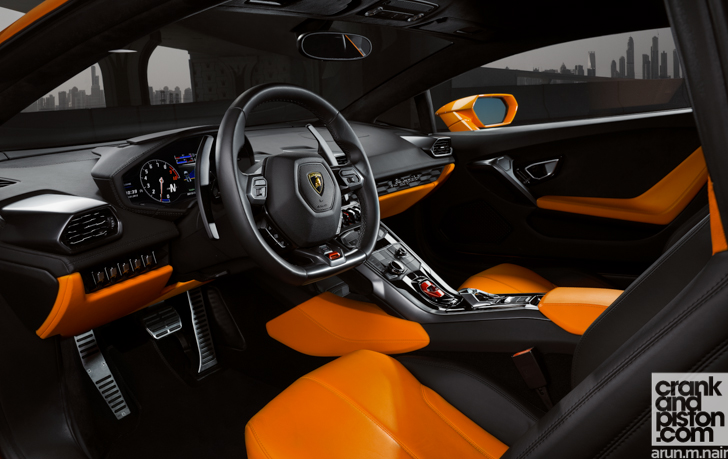 Any key details we’re missing there? – Actually yes. The three-way drive mode is conveniently located via the ‘Anima’ button on the steering wheel (since we only have four hours with the Lamborghini, we’ve forgone ‘Strada’ and ‘Sport’ for Corsa). The aluminium/carbon fibre hybrid chassis is almost as stiff as its carbon fibre alternative but costs a significant chunk less. And manual transmission fans will be disappointed to learn that the all-wheel drive monster is only available with a seven-speed dual clutch automatic.

Can it shift? – And how! The 5.2-litre V10 under the bonnet has been modified at the top end since its Gallardo days, and consequently fires out 610hp and 413lb ft of torque. Standing sprints to 100kph are done in 3.2 seconds, and top speed is a jaw-loosening 325kph.

So how does it drive? – Not as you might think. Whereas in the Ferrari 458 Speciale, every nut, bolt, prancing horse sticker and meticulously weaved seatbelt has put on a strict diet for optimum performance, the Huracán has not, leaving enough civility for day-to-day driving for days when the right foot doesn’t feel quite as heavy. Bizarrely, driving Huracán is not the ‘this is all so very easy to push hard’ experience we find in the McLaren 650S. Acceleration in the Huracán is neck-snapping in first gear, and – quite remarkably – even more so when you select reverse. With a 602bhp raging bull at my fingertips though, it’s a while before I put my brave trousers on and push the V10 harder. 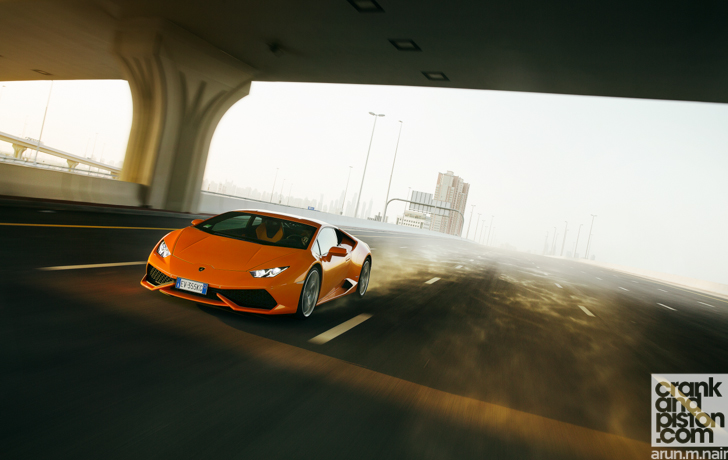 And when you do…? – With a Lamborghini you expect the aggression to continue across the range, and yet acceleration is surprisingly linear into the high revs. A foolish man would assume he’s tamed the rampant bull with ease, and as soon as he lets his guard down, he’ll get a mule-kick under the chin. There’s an undercurrent of understeer at the front end when you’re really on it, and while there’s still a lot of grip when the nose is pointed in anger at the nearest sharp chicane, there’s just enough twitchiness to keep you on your toes (which seems rather appropriate for a Lamborghini, doesn’t it?) It’s the same at the back, the rears planted through the turns until the V10 decides it’s time to give you a warning shot, the resultant (ever-so slight) kink enough to widen your eyes and wish the oncoming armco barrier was a little further away.

So, is that bad? – Far from it. I’ll admit the bucket seats leave me sprawled out on the C&P office floor for a few hours in a vainglorious attempt to straighten my spine, but despite the Audi underpinnings, there’s enough Italian lunacy at the helm to put thoughts of ‘Gallardo v2.0’ well out of reach. While not as aggressive as the Aventador, as focused on performance as the Speciale or as civilized as the 650S, the Huracán – as best we can judge from four hours at any rate – finds an interesting grey area. One it will contentedly kick you into if given half a chance.

And what of the price? –Ah, yes, okay, deep breath…$290,000(ish). Hopefully next time we’ll be able to grab quarter of a million dollars for a little longer