The 740bhp, 350kph SV Aventador Roadster is arguably the most lunatic Lamborghini the Middle East has ever seen. So where better to take an uncompromising supercar than a secluded mountain road?

“This is the most insane thing  I’ve driven in years.”

This is a statement made only slightly ridiculous by the fact I’ve caught crankandpiston’s Bassam at home in his pyjamas, and that the ‘insane thing’ in question (the Lambo, not the pyjamas) was first unveiled at last year’s Pebble Beach Concours d’Elegance. Hardly the forefront for performance driving, and not exactly the debut we’d expected for ‘the fastest and most electrifying Lamborghini of all time’.

Saying that, I can’t say I’m overly surprised to hear this. At the base of today’s brute is a standard V12-powered Aventador, albeit one in which the dial has been turned up from 10 to ‘sweet holy crap’ courtesy of severe weight saving, an extra 49bhp on-tap, and a smorgasbord of aerodynamic revisions to produce the most hardcore version of Lambo’s flagship yet. For those cynics suggesting that the Raging Bull has ‘lost its edge’, the convertible SV Roadster waiting for me downstairs – one of only 500 made – offers a seriously strong opposing argument.   If that were not enough, my heart rate is raised yet further as the m’dear colleague ‘casually’ mentions this is the closest road-going experience he’s had to the Oreca LMP2 prototype he raced a few years back in the Intercontinental Le Mans series, and is one of only a handful of cars he’s driven in which the traction control button was kept very much ON.

Dear Lord. Just what exactly have I signed up for here? 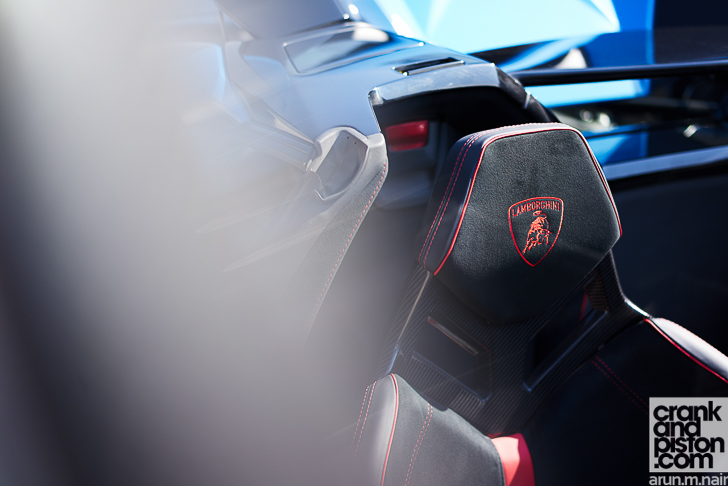 It’s a question partly answered as I traverse the labyrinth of corridors to the basement in which the SV is parked, an apt metaphor as I prepare to awaken the slumbering beast. In the gloomy bowels of the building, the metallic blue Roadster lies snugly between a Bentley Arnage and old Patrol with an askew number plate, the Aventador’s traditional sharpened bodylines now more pronounced courtesy of a fixed rear wing, a gaping rear diffuser, the upward swing of those scissor doors, and a truly massive front splitter. That should be fun over the incline out of the parking garage….

The positioning of those slashed side sills makes getting in hardly the most elegant of operations, nor does the hilariously low seating position. Though trimmed in alcantara, there’s little give in the one-piece carbon-bucket seats, and their unyielding nature means it takes a bit of squirming before I finally find a semi-comfortable seating position. The offset pedals and jutting nature of the wheel arch means I have to shift my legs closer to the transmission tunnel than expected. There is no SatNav, no radio, and significantly more carbon fibre detailing than the base model. Any sense of day-to-day driving has been ripped completely from the DNA of this ‘insane thing’, and those words suddenly come springing back as I pull one of the hanging door pulls and bring the scissor door down with a thud.

“For those suggesting Lamborghini has ‘lost’ its edge’, the SV Roadster offers a strong argument”

Up till now, compounding my already frayed nerves, there’s been hardly any noise from within the bowels of the building, save the metronomic sound of my own footsteps clapping their way across the garage floor. A silence utterly shattered seconds later as I flick the red housing up over the almost laughably understated Stop/Start button and fire the V12 into life. There’s a mechanical whir as the starter motor springs into action followed by a lengthy turn-over, just long enough to make me wonder whether the engine will catch at all. When it does, a titanic VVVRRRAAMM can be heard – and felt – through both my fingertips and spine. It’s so abrupt and deep, resonating as it does through the cavernous parking structure, that it’s a few moments before my breathing returns to normal and I begin to creep, VERY gingerly towards the exit. 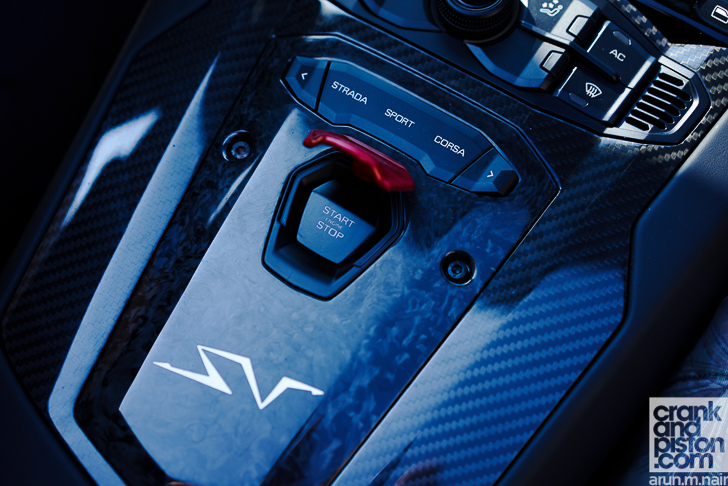 A hydraulic nose lift means this exercise is not quite as wincingly tentative as I expect, though it’s hardly the work of a moment. At 2030mm wide and 4835mm long, the SV is big. And I mean SERIOUSLY big: spend enough time with any car and they gradually begin to shrink around you as you grow used to the proportions. With the SV Roadster, it ain’t happening: the nose lift only works up to 50kph, and after that I can only imagine how close that enormous front splitter is skimming the asphalt; all I can see in the super slick wing mirrors are the beefed out rear wheel arches, and rear visibility is akin peering through a letterbox with cataracts. This makes the opening highway run, complete with movable chicanes, all the more stressful. And this is the easy bit: we’ve a mountain road to conquer at the end of this.

Mercifully the traffic, even at this absurd time in the morning, begins to thin out, and rather than darting glances in the wing mirrors, I can actually start to enjoy the drive. Of sorts. The engine noise is a symphony, limited noise insulation in the cabin allowing the V12 roar to emanate unmuffled. But while part of me is happy to keep this on repeat shuffle, the already exhausted part of my psyche needs something a little less rancorous: time for my headphones – again, no radio – and some Sam Smith. 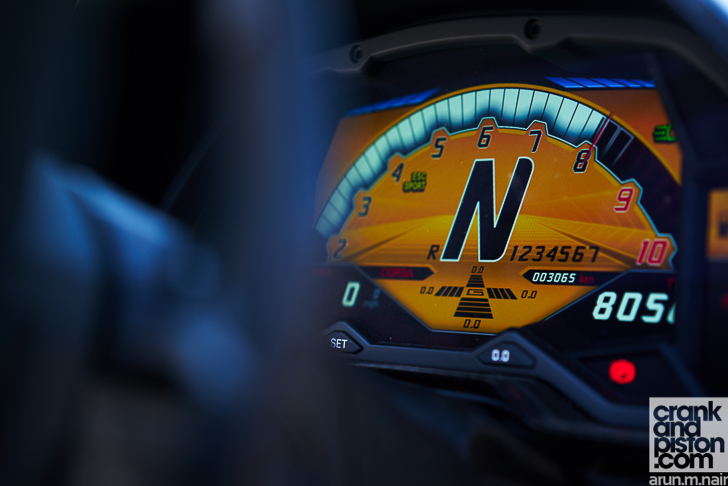 I’m still squirming though. Standing 6′ 2″ and with, ahem, ample proportions, I grant you I’m not the ideal stature for an Aventador. Nor, with a super-sporty suspension setup and ‘no holds barred’ approach to performance, could I reasonably expect a civilised ride quality. Even so, with the aggressively raked windscreen and the fixed seats, I’m forced to slink very far down into the bucket: fortunately there’s plenty of adjustability at the steering column to make this work. After 50 minutes of shifting, my back is already starting to feel the strain: I end up pulling over at a petrol station – good Lord, quarter tank gone already – to lodge a jacket between my shoulder blades for some semblance of lumbar support, much to the bemusement of the crankandpiston.com photography team following in our long term Volkswagen Golf.  Up to this point, and with Bassam’s words still ringing in my ears alongside that thunderous V12 pitch, I’ve been stroking the Aventador SV along rather than standing on everything. As well as having 740bhp, this particular model is a marketing demo in the area for only a few weeks, hence the Italian number plate: should the front end meet a crash barrier, severe blood loss will be the least of half a million problems to contend with.

“No more excuses. Time to see what the most electrifying Lamborghini of all time can really do”

Slowly the monotonous highway run starts to dissipate into more winding stretches, desert landscape and town centres making way for rising outcrops of rocky terrain, and the knot of tension in the base of my spine fades away as we hit the start of our mountain route. No more excuses. No more stroking along. Time to see what the fastest and most electrifying Lamborghini of all time can really do.