Jaguar’s eyes were firmly set on the BMW 3 Series and Mercedes C-Class when it unveiled the new XE S. We thought it time to find out how the newboy handles the competition. But could the Volvo S 60 Polestar underdog spring a shock result?

Quite honestly, it’s difficult to know which of our four mid-size sport saloons has the most to prove today.

All eyes for instance readily fall on the BMW 3 Series, arguably THE sports saloon of choice since the E21 was dropped back in 1975. It’s easily the biggest seller on Munich’s books, accounting for a quarter of BMW‘s sales and having sold 14 million units in one guise or another across 130 markets worldwide. With a new mid-life refresh comes a new engine line-up, and some key chassis tweaks to yet further improve the performance. Given its reputation, the 3-Series has arguably the furthest to fall from grace.

It’s a similar story with the Mercedes C-Class, a long-time 3-Series rival dating back to the original W202 in 1993. But while the 340i’s recent facelift has been applied with the lightest of brushes, the C 450 Sport (our REVIEW of which you can read HERE) brings AMG-spec suspension, chassis tweaks and an Affalterbach-tuned biturbo V6 to plug the gap between the C-Class and the more fiery C 63, akin to BMW’s M-Sport range. It’s an AMG – well, AMG-Lite anyway – with a point to prove and yet plenty to lose given its lineage.

With the Jaguar XE S though, things are a little different. Memories of the recalcitrant X-Type are still fresh in everyone’s minds, and almost $2.8 billion has been invested in a new factory to make sure Jaguar’s new SUV and its BMW 3 Series rival don’t re-tread thin ice. Almost 3000 new jobs have been created for the XE alone, and the saloon is the first production car to debut not only Jaguar’s new Ingenium engine family but also the company’s oft-celebrated flexible aluminium architecture. Failure is not an option.

But my drive today doesn’t start with any of these. Instead, my curiosity is duly spiked by the dark horse of today’s group test, the Volvo S60 Polestar….wait, what…? 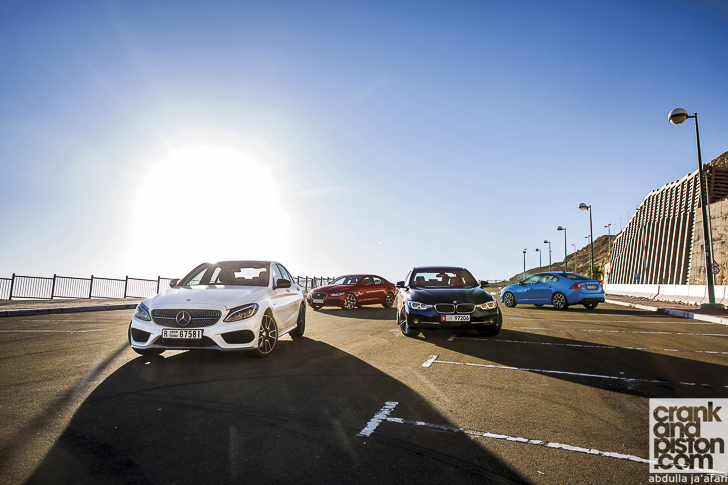 Yep, a Volvo. Essentially it’s an S60 T6 R-Design with all the options boxes ticked, and as such already dates back to 2010. But under the bonnet though lies a 350bhp 3-litre twin-scroll turbo six-cylinder, the second most powerful unit here today behind only the 367bhp Merc and ahead of both the 335bhp Jag and 326bhp BMW. There’s also heftier brakes and race-tuned shocks from industry giants Ohlins, the combination of which astonished us during the Polestar’s last crankandpiston.com jaunt.

My colleague David in particular has been raving about the Volvo since we left Dubai this morning at 5am: “seriously, this was one of the best sport saloons I drove last year. I didn’t think it was possible to produce a chassis that stiff without destroying the ride. It’s unbelievable.” Throughout the day, David’s enthusiasm for the Volvo refuses to wilt: it’s the one we find him asleep in just after lunchtime, after all. For myself and fellow crankandpiston.com scriber Jameel though, it’s new territory, and we’re both keen to see how the underdog performs on the sinuous stretch of mountain road in Jebel Hafeet we’ve chosen as our test route.

“My curiosity is duly spiked by the dark horse of today’s group test, the Volvo S60 Polestar….wait, what…?”

Turns out my timing is pretty good. Photographer Abdulla, whose nails are already chewed down to the nub at the daunting prospect of his first four-car photoshoot, is concentrating on rolling shots for the Mercedes and Jag. He doesn’t even notice the Volvo leave.

As I position myself in the cabin and thumb the almost hilariously understated Stop/Start button, I’m met not with a meaty bellow from the six-cylinder but a more subdued rumble, a little underwhelming given the Polestar’s gritty exterior look. This lethargy continues when first gear is slotted and the loud pedal is given a poke. Power and 369lb ft of torque are fed through all four wheels, but it’s a very relaxed pick-up. Soon the rev counter lifts itself above 3000rpm. My my, what a change this brings. 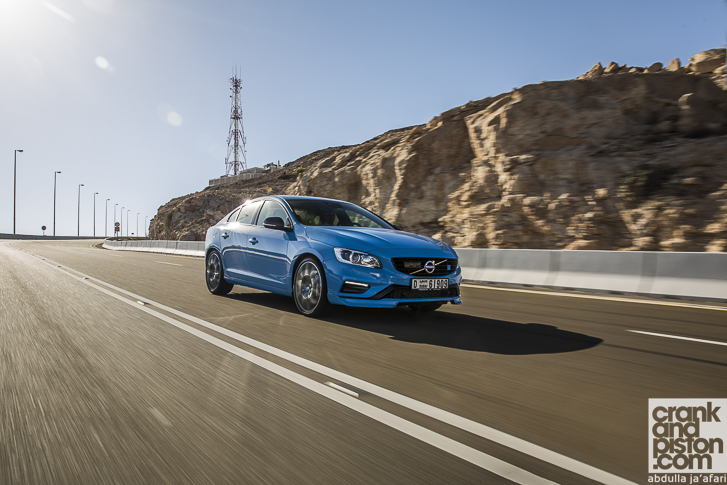 With a full head of steam, the less than neck-snapping pace of the straight-six suddenly delivers a huge wave of torque and urgent pick-up. It’s not violent, but it’s altogether more spirited, accompanied as it is by a much throatier soundtrack in the high revs. With 350bhp on-tap that continues to build in ferocity up the rev range, I had wondered if the body would even be able to take it, fears ably put to rest as I tuck the nose into the first apex.

The stiffness of the chassis means the balance is simply astonishing for a saloon weighing a hefty 1752kg. Few steering inputs are required as the power is fed in, those front wheels refusing to budge. An early tentative approach is soon forgotten as I start braking later – the stopping power also immense – and throwing the Volvo in at much higher speeds. It simply does not move. David’s vote of confidence was not misplaced.

What perhaps comes as a surprise is the steering, which – curiously – hasn’t been updated at all. There’s consistent weighting, but there’s very little feedback, turning what should be a scintillating drive into something altogether more alienating: it’s enormous fun to feel that balance working so magnificently through the turns, but I just wish I could feel the same joie de vivre through the steering column.

It’s with two very mixed emotions then that I return the Volvo and jump straight into the Jaguar, Jameel deciding to join me in the Mercedes C 450 for a blast up the mountain. Abdulla’s attention meanwhile has shifted to the BMW as he tries to pick up the sun flares bouncing off the dark blue paintwork. 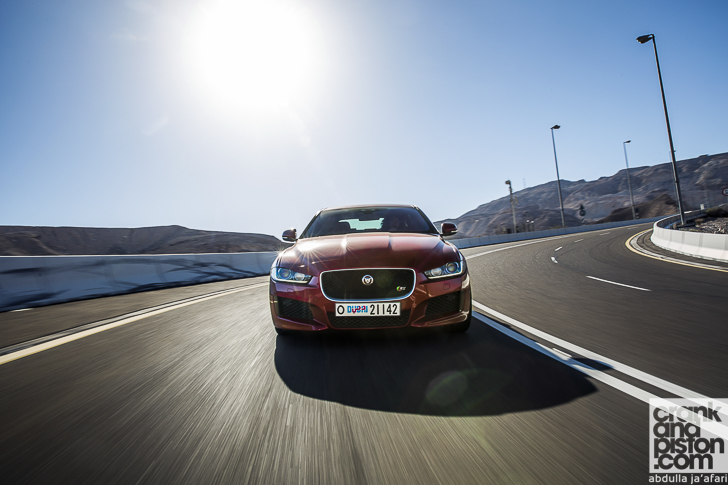 As our Anglo-German convoy begins its ascent, it’s immediately noticeable that the Jaguar possesses a much greater sense of refinement over the Volvo. There’s little to overly criticize about the S60’s clean cabin design, but the quality of materials in the XE S is extraordinary, the build quality even better, and the layout easily the most elegant here today. And yes, I‘m still enamoured by the rotary shifter that rises from the centre console.

Even on the move, the difference twixt Sweden and GB is palpable. The driving position in the Volvo for instance, whilst comfortable and offering good lumbar support, felt just an ace too high, whilst the XE S finds a fine balance between all three. There’s considerably less road and wind noise thanks to greater sound deadening, and whilst there’s the occasional ‘beep’ from the Jaguar’s on-board driver assistance system, it’s no comparison to the more nannying setup in the Volvo: BOING ‘put your seatbelt on’, BOING ‘you’re wandering out of lane’, BOING ‘you’re almost speeding’, BOING ‘you should change gear now’, etc.

“I can actually feel the front end hunkering down and the revs rising as we hit the first sequence of corners. There really is a greater sense of refinement in the XE S”

As we continue to climb, the manner in which power is put down by the 3-litre V6 in the Jaguar is far different to the (eventually) more rampant nature of the Volvo, the XE S preferring more linear and controlled bursts of speed that feel no less emphatic, if perhaps a little less dramatic. But that’s okay, for shifts through the eight-speed gearbox are smooth when required and rifle-like at pace. 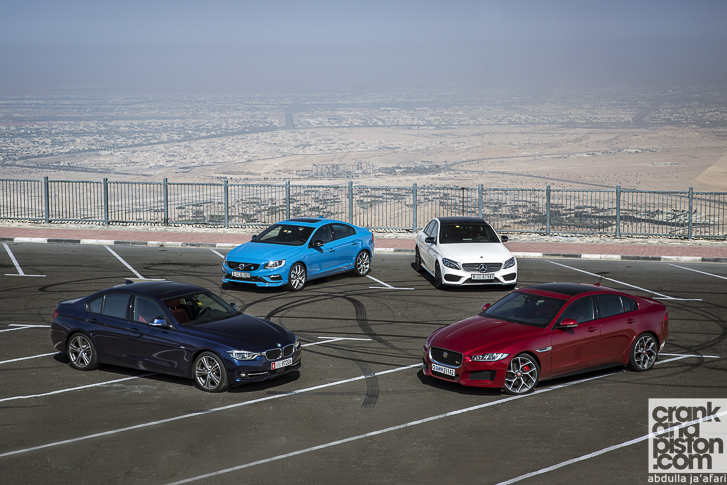 Much as we’d expected though, the Jaguar’s Ingenium engine is shaded by the XE’s composure through the corners. Hitherto the ride comfort has been almost Mercedes-like in its suppleness, though both the suspension and handling feel tangibly tauter as I rotate the shifter into ‘Sport’. I can actually feel the front end hunkering down and the revs rising as we hit the first sequence of corners. Like the Volvo, the balance is phenomenal, but while the S60 encourages you to lean without mercy on the front end, there’s a greater sense of refinement in the XE S. If not exactly dripping with feel, the power-assisted steering nevertheless weights up beautifully at pace, encouraging you to really dig into the chassis’ wonderfully balanced reserves of grip. The Jag doesn’t stick to its rails though: tap the throttle enough and the rear wheels will begin to step out, albeit gingerly and not enough to snap you away from the apex. Just enough to allow the XE S to dance through some of the tighter sections in ways, as we find out, the more focused Volvo and more sledgehammer-like Mercedes simply cannot.

The C 450 behind me, whilst right on my tail on the straights, has started to drop back through the corners, and it’s a couple of minutes before Jameel joins me at the top of the mountain. His eyes are wide, but there’s an enormous grin stretched across his face: “that engine is incredible” is about the only thing I can get out of him, and we both agree the more refined confines of the Jaguar are a good place for him to be on the way back down, I in turn taking the Mercedes.

Previous ArticleVIDEO. APEX: The Story of the Hypercar. We have a date!
Next Article The new R18. Audi’s next Le Mans winner?