Jaguar are developing technology that will bring gaming styled graphics and perspective straight to the driving seat in your own car. If you own a Jaguar that is 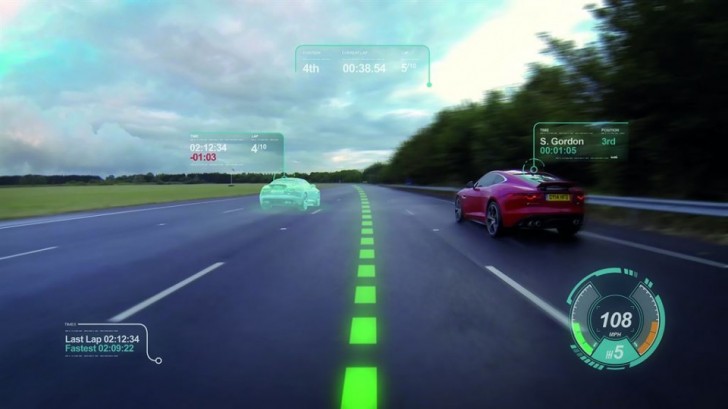 The ‘Jaguar Virtual Windscreen’ concept will use the entire windscreen as a display so the driver’s eyes need never leave the road. Think the screen you are faced with when you play any main stream video game simulator on your PS3/PC etc. Amazinly there will be racing line and braking guidance that will pop up in front of you appearing to be marked on the track giving you that motorsport edge. How they will judge the optimum line, braking points and turn in points is yet to be confirmed. Sounds damn good though.

Not only that, Jaguar will be able to provide you that really annoying Ghost car visualisation of your car on a previous lap. Or for extra annoyance you can have your mates lap appearing in front of you, just so you can extra frustrated that you’re actually slower than you believe.

Dr Wolfgang Epple, Director of Research and Technology for Jaguar Land Rover, said: “We are working on research projects that will give the driver better information to enhance the driving experience. By presenting the highest quality imagery possible, a driver need only look at a display once. Showing virtual images that allow the driver to accurately judge speed and distance will enable better decision-making and offer real benefits for every-day driving on the road, or the track.”

The tech boffins at Jaguar Land Rover are also working hard on developing a gesture control system to keep the driver’s eyes on the road and reduce distraction by limiting the need to look at or feel for buttons and switches to press. Using E-Field Sensing, which is based on the latest capacitive discharge touch screens and gives much greater accuracy than ever before. For example, a smartphone today detects the proximity of a user’s finger from 5mm. The Jaguar Land Rover system increases the range of the sensing field to around 15cm which means the system can be used to accurately track a user’s hand and any gestures it makes inside the car.

“Gesture control has already become an accepted form of controlling anything from TV sets to games consoles. The next logical step is to control selected in-car features. We have identified which functions still need to be controlled by physical buttons and which could be controlled by gesture and carefully calibrated motion sensors,” said Dr Epple. “The system is currently being tested on a number of features including sunblinds, rear wipers and satellite navigation maps. It has the potential to be on sale within the next few years.”

Scary stuff right? Is it really needed? Or just tech bluff? That element is yet to be answered, however at least they aren’t taking control of the car away from the driver.