AF Corse – winners of the event at Yas Marina in both 2012 and at the second running that in the year – have confirmed an incredible six 458 Italias will compete for the Italian squad’s hattrick. Gianmaria Bruni will partner fellow former winner Toni Vilander alongside Gaetano Ardagna in the lead Ferrari, while Stephan Sarrazin, Enzo Potolicchio and Nicolas Minassian renew their partnership in the #2 Italia.

Runners up last year, Alex Popow, Pierre Kaffer and Ryan Dalziel jump ship from AF Waltrip to AF Corse’s #11 for the 2013 endurance event, as do Steve Wyatt, Michele Rugolo and Maurizio Mediani in the #10. AT Racing’s line-up from last year of Yannick Mallegol, Jean Marc Bachelier and Howard Blank have also signed with AF Corse for the Gulf 12 Hours to drive the #14. Fellow former AT drivers Niek Hommerson, Louis Machiels and Martin Lanting complete AF Corse’s line-up in the #15.

Although drivers are as of yet unconfirmed, Team Kessel Racing will bring at least four Ferrari 458 Italias to Yas Marina. Similarly Team Black Falcon – two-time winner of the Dubai 24 Hours – have yet to announce their driver line-up but will prepare two Mercedes-Benz SLS AMG GT3s for the Gulf 12 Hours, doubling their efforts from last year.

Avelon Formula and BF Motorsport have also confirmed four Wolf GB08s between them, with an as of yet unspecified team announcing a further two. Italian outfit NovaRace and UK-based 888 Optimum will between them race three Ginetta G50s in Abu Dhabi.

rhino´s Leipert Motorsport and Gulf Racing bring the fields only Lamborghini Gallardos, the latter also being represented by a McLaren MP4-12C. Only one Audi R8 LMS makes the line-up courtesy of DragonSpeed, while the team representing the Yas Marina Circuit house the field’s only Aston Martin Vantage. Three Porsche 997 GT3 Rs will also race in the Gulf 12 Hours, raced by Autorlando Sport, Ebimotors and GT Pro by Almeras respectively. 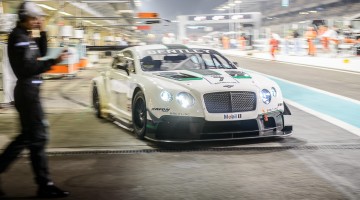