To gear up for the 2013 Goodwood Festival of Speed, we take a look at some of the priceless metal that made an appearance at this years 24 Hours of Le Mans. You may need a pinch of salt for this one…

Despite summer sun in the Middle East melting the barometer needle, there are two events in July we’re looking forward too immensely: the Spa 24 Hours, and the Goodwood Festival of Speed. crankandpiston.com is on the ground at Goodwood in search of the exotic, the beautiful and the just plain mental (as hopefully our preview will have established). Sounds a lot like another world class event we were at recently, the 24 Hours of Le Mans. What better way to warm-up for Goodwood?….

…okay, it’s a bit of a tenuous link. But what can I say? I ran out of steam during the 24 Hours itself, so could we just pretend this post actually makes sense? 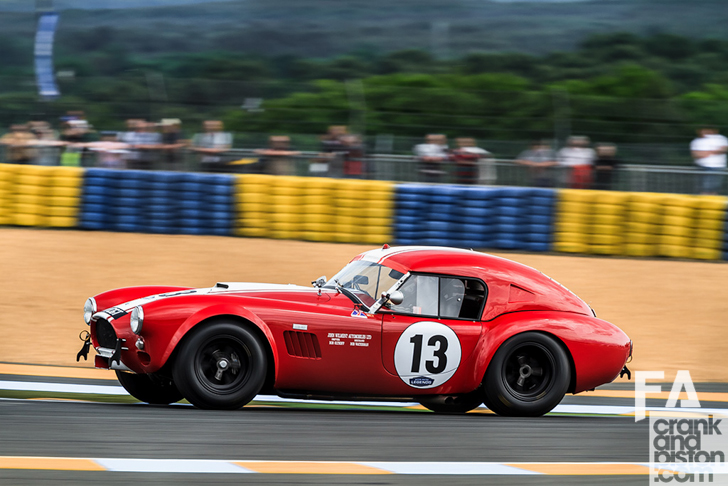 This modified 1963 AC Cobra – driven by Brit Shaun Lynn – was one of the choicest examples from a 60-strong grid of Le Mans Legends. In a race dominated by Alex Buncombe in a 1959 Listin Costin – and which also featured the monkey himself, Chris Harris, finishing eighth in a 1959 Lister Le Mans Coupe – Lynn managed to take a strong fifth place in the Cobra. 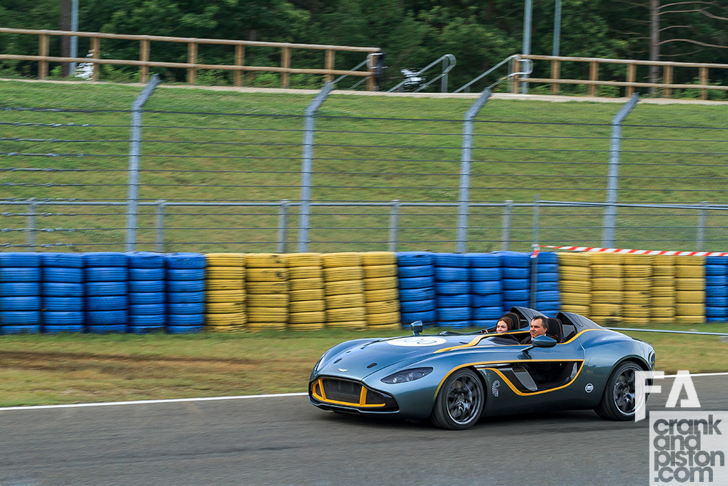 And it wasn’t just the historic racers or the Le Mans prototypes/GTs that were drawing the crowd’s attention. As part of its centenary celebrations throughout the year –which included landing a brand new Vanquish on top of the Burj Al Arab – this CC100 Speedster Concept turned its first wheels in anger at the Nurburgring 24 Hours, will make an appearance at this year’s Goodwood, but also put its 290kph capable 6.0-litre V12 to good use at the most famous endurance race in the world. No Stirling Moss this time though… 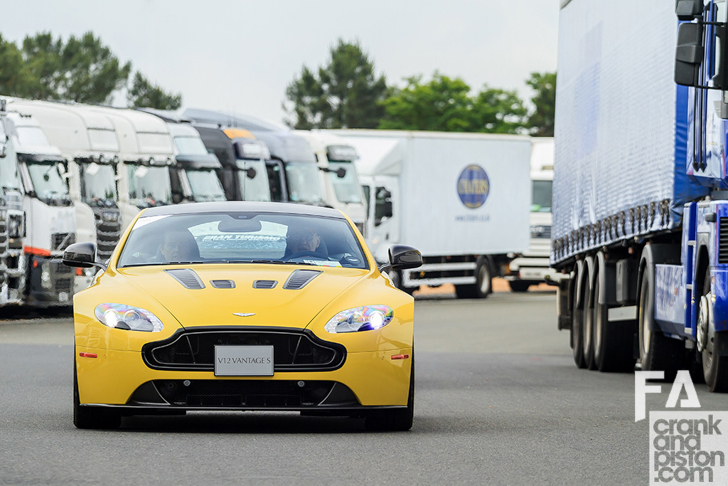 …although the new Aston Martin V12 Vantage S did make an appearance. After years of questionable satnav systems, brakes calipers made of bolsa and a chassis with lineage tracing back to the Mayflower, the British marque may have built a bit of a corker here. 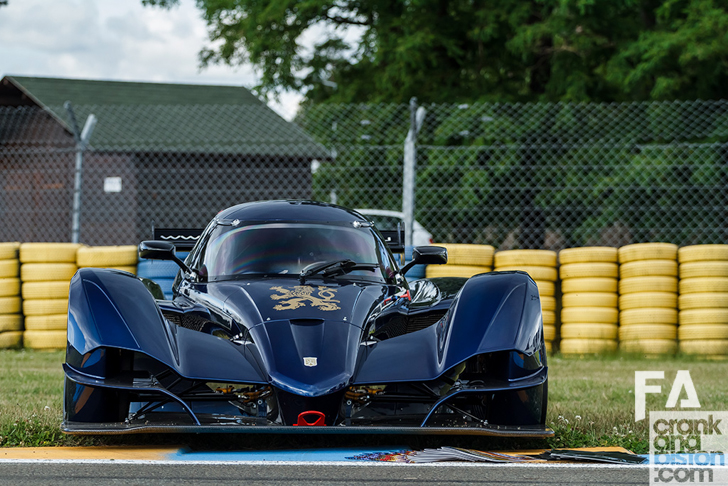 This Praga R1 was also causing a stir in and around the paddock. Weighing an almost impossibly light 590kg (thanks to a carbon fibre monocoque and lightweight, well, everything), the R1 is marketed as ‘one of the safest racing cars’ thanks to polycarbonate windows, a safety fuel tank and crumple zones. A shame then that the 2.0-litre four-cylinder Renault engine chucks out only 210bhp, or 356hp per ton. Interesting work from a Czech manufacturer that can trace its lineage back to 1907. 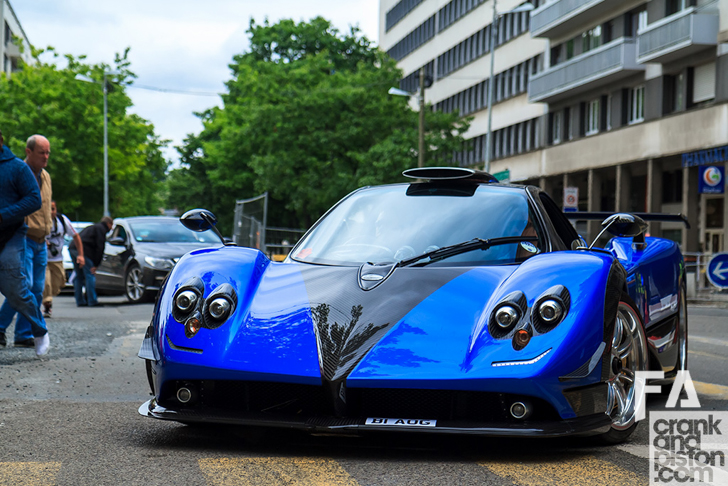 What’s one of the fastest races on the planet without a string of supercars stuck in traffic outside the main gates? One in particular was this Pagani Zonda PossiblyTricolorebutprobablyanR, one of over a billion different versions of the Zonda built in the last 25 minutes and one of the ‘final’ curtain calls for the model ahead of the Hyuara’s arrival next year. We mock, but credit where it’s due. There aren’t many newboys who come along and give Ferrari and Lamborghini a thrashing on home turf, as the original 394hp V12 C12. 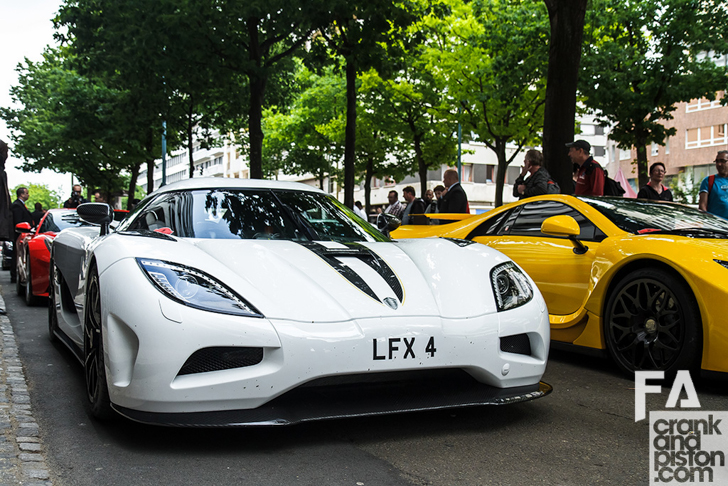 A target that not just any supercar can match, though this Koenigsegg Agera would take a shot at. Pay no attention to the F12berlinetta behind the curtain, er, carbon fibre that everyone is looking at in the picture. The 2013MY Koneigsegg will hit 100kph off the line in three seconds, 200kph in just eight seconds and turfs out 960hp. With speed of course comes a whopping $1.5 million price tag, so it’s really no wonder the crowd is eying up the near-as-make-no-difference $400,000 prancing stallion as better value for money. 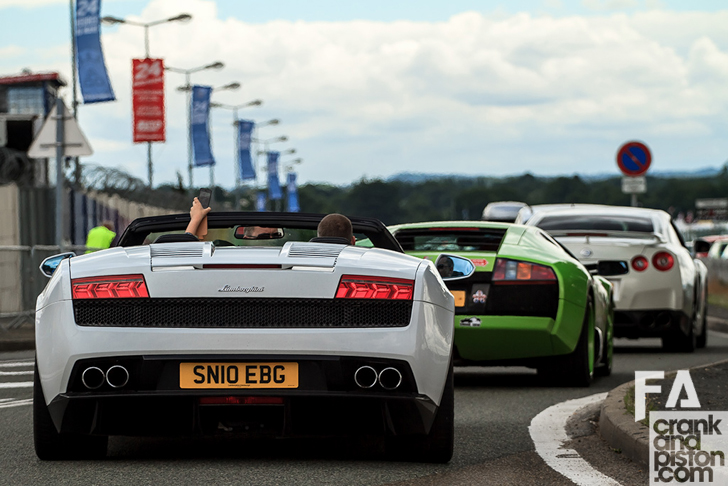 This though is the shot we’ll leave you on. Just goes to show that even if you own a Lamborghini Gallardo LP 560-4 Spyder, the sight of a Nissan GT-R will still have you reaching for the iPhone.

Hopefully that’s got you geared up for Goodwood. Stick around.