A snapshot of what Audi got up to at the Frankfurt Motor Show.

Being a German company at a German motor show, Audi didn’t hold back at this year’s Frankfurt Motor Show. Ingolstadt’s finest constructed a huge cube-shaped building especially for the event, which had been under construction since July, and launched a multitude of new and updated models. 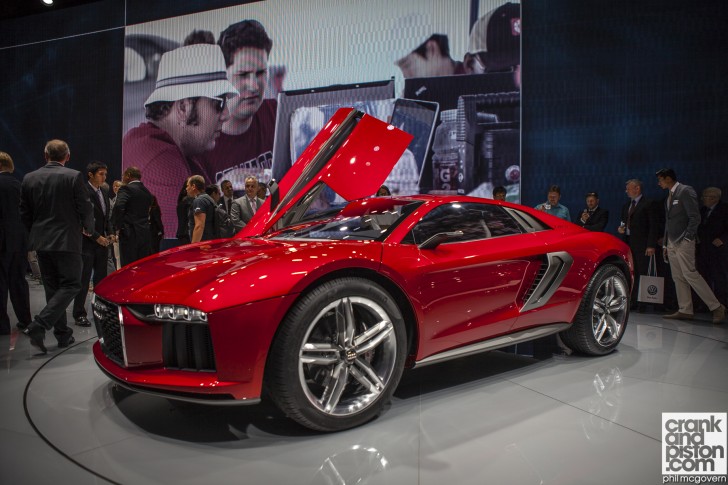 First up was this, the Audi Nanuk Quattro concept. It’s a strange mix of vehicle types that Audi calls a crossover, combining the dynamics of a sports car with Audi‘s famous quattro four-wheel drive system for the race-track and off-road. So, a mid-engined rally-type affair then. 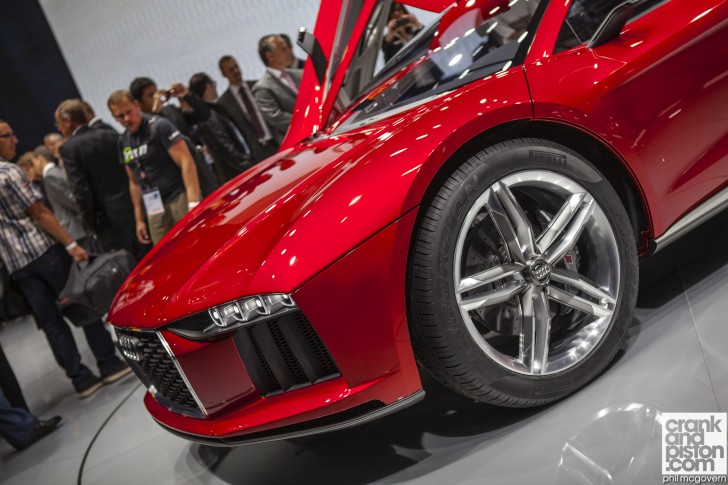 The Nanuk Quattro is powered by a 5-litre V10 TDI diesel engine making 537bhp and a stonking 738lb ft of torque, which means a 0-100kph time of 3.8 seconds. The car has been developed with the stylish folk at Italdesign Giugiaro and, in Audi‘s words, “combines the dynamics of a mid-engine sports car with the versatility of a sporty recreational vehicle”. It’s got clever suspension that lowers for on-road use and automatically raises when on gravel, and rear-wheel steering for more stability during high-speed cornering and tighter handling at low speeds.

Don’t get your hopes up for a production version of the nanuk quattro, but it’s an intriguing showcase for new technology, including the aluminium space frame body and carbonfibre-reinforced polymer body panels. 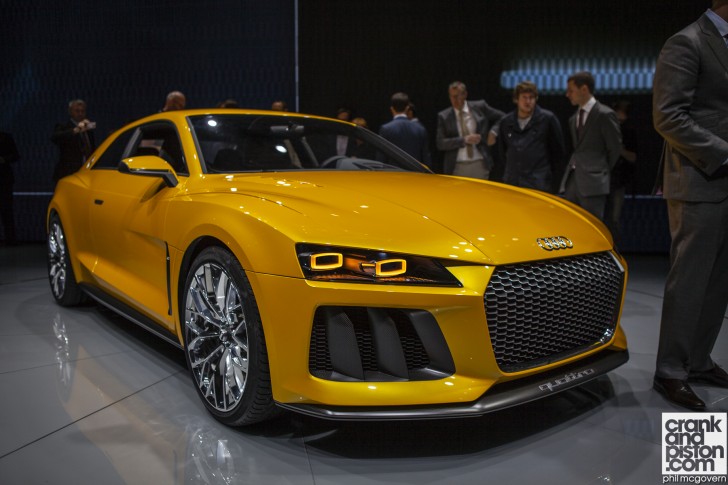 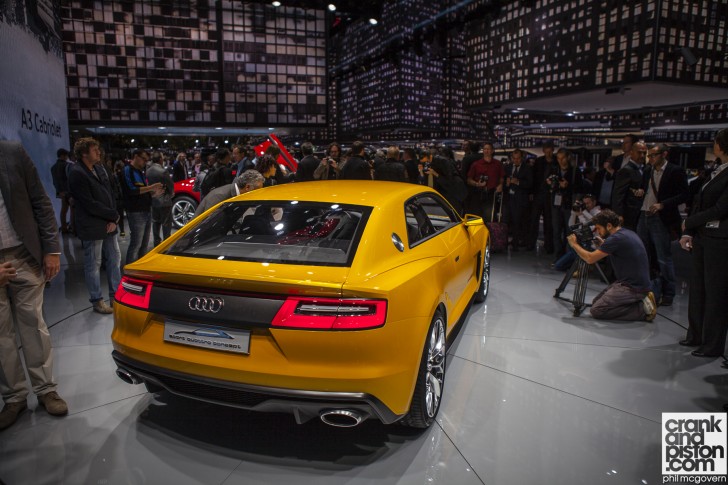 This show coupe boasts a plug-in hybrid drivetrain – a 4-litre twin-turbo V8 and electric motor – with 690bhp, giving it a 0-100kph time of 3.7 seconds. Wide, low and sat on 21-inch wheels, it’s a menacing beastie, designed with racing in mind. Expect various aspects of the concept to form the basis of future Audi sporting models. 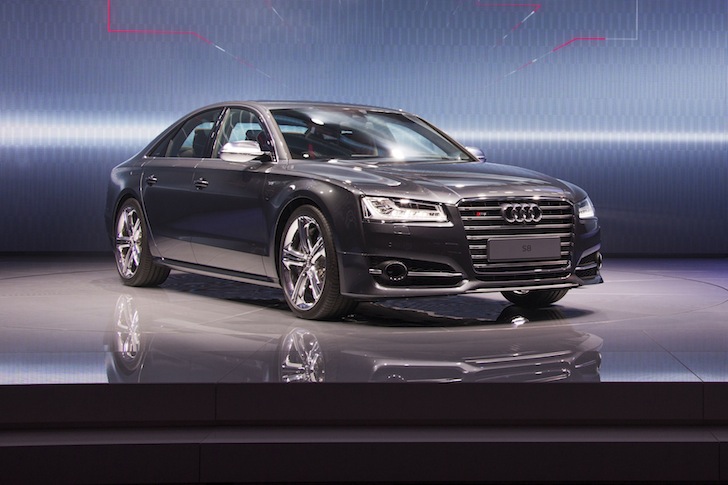 The new, facelifted Audi A8 got its world premiere, showing off its newly chiselled face with updated bonnet, grille and front bumper, as well as mild tweaks to the headlights. The rear lights are also flatter and joined by a chrome strip, and customers can choose from 12 paint colours, including five new ones.

Power has been increased across too. The V6-powered A8 3.0 TFSI now puts out 306bhp, up 20, while the twin-turbo V8 in the A8 4.0 TFSI now has 429bhp, up 15.The S8 (pictured) makes do with its 4-litre V8 with 513bhp. Other tweaks included increased noise damping to further reduce sound levels inside, and the boot is bigger too. The alloys are lighter as well. 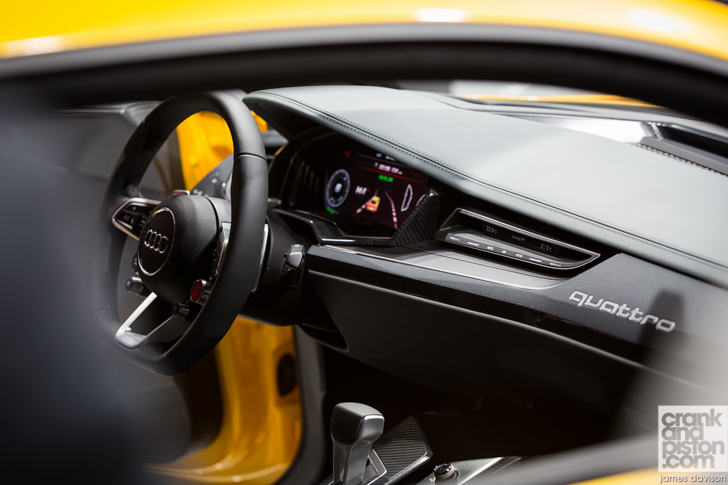 Naturally, given the sheer size of the Audi building, there was also virtually everything else in the current range on display, including the A3 range with the new A3 Cabriolet, the S3 and the new A3 Sportback e-tron plug-in hybrid, which will go on sale in Europe next year. Also, ceiling mirrors. Cool. 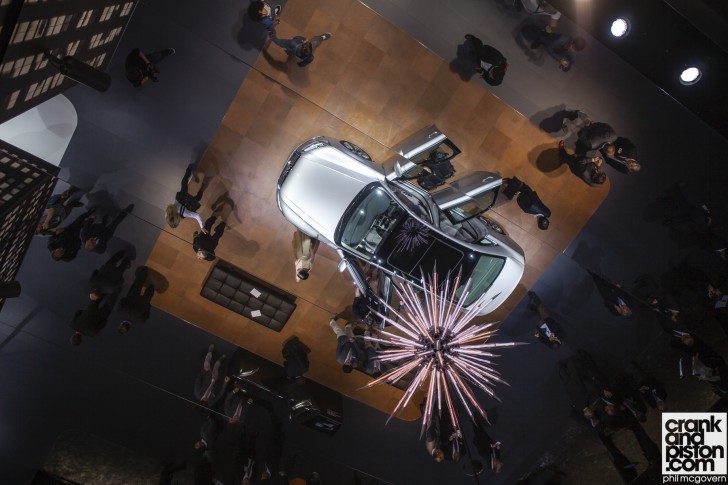