It never really ceases to amaze how Forza, be it new games or expansion, can both stagger us with graphics and gameplay as crisp and clean as an unwrapped bed sheet, but also cause us to prolapse with envy regarding the cars that, at some point, have been at their beck and call. The two most recent updates are no exception.

Blizzard Mountain for instance, a downloadable expansion for Xbox One and Windows 10 that offers extended gameplay on winter stages (specifically charges up, down and to the peak of said snowy edifice), offers players the chance to try the limited edition Lamborghini Centenario, the Lancia Stratos, the brand new 577bhp Mercedes-AMG GT R – sweet Waylon Mercy! – and even the Ford Focus RS RX made famous by a certain Mr Block in Gymkhana 9. The Rockstar Energy upgrade though introduces seven new performance weapons, and here is where things start to get really interesting.

The BMW i8, for example. We’ve driven, a couple of times, and we like it. Really quite a lot, particularly the speed of the green-limbed brute, and much the same can be said of the Bentley Bentayga. Those of a Radical persuasion meanwhile – stop groaning – can check out the 298kph RXC Turbo while classic car nuts will want to check out the 1987 Nissan Skyline GTS-R(31) or a ’72 Ford Falcon XA GT-HP. And then there’s the #11 Rockstar-sponsored Ford F-150 Trophy Truck, which handles like a well-balanced four-poster bed, true, but quaffs close to 1000bhp in blind, furious gulps. I’ll give you two guesses which one I’ll be using the wear the Xbox controller down to the nub.

You can check out more of our Video posts HERE 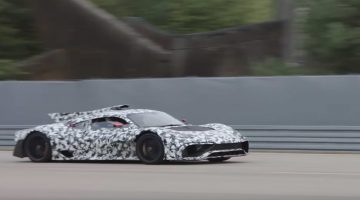