Despite having a turbocharged V8 instead of a normally aspirated V12, the F40 is often regarded as the greatest-ever Ferrari road car 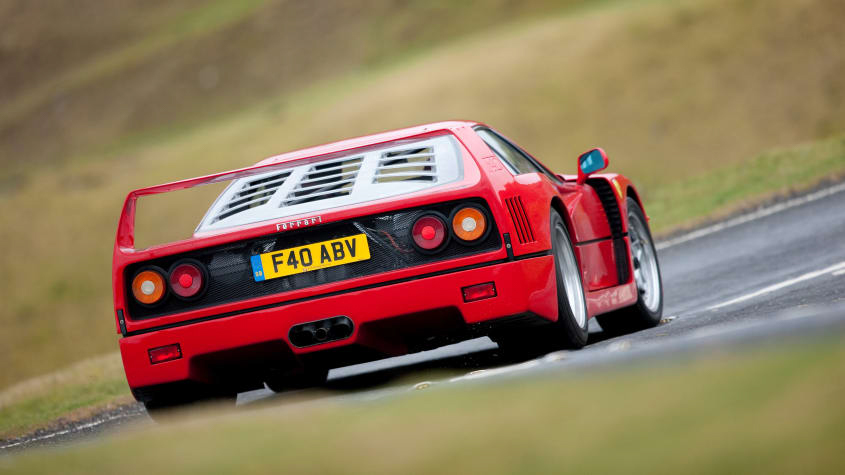 Choosing a favourite Ferrari is like being tasked with deciding which of your children comes at the top of the pecking order, but if you happen to favour the child who’s a bit wild and unruly and has a visceral side to their character, there’s only one Ferrari for you: the F40. Its mission was to pick up the baton from the already heroic 288 GTO and turn the volume up to 11, taking the game to Porsche’s technological tour de force, the 959.

The F40 was, of course, nothing like the 959. The latter offered a sophisticated four-wheel-drive system and clinical precision, while the former followed a more analogue route, choosing driver involvement, excitement and interaction above all else. But that’s not to say the F40 wasn’t cutting edge; it utilised the most up-to-date materials and technologies available at the time and, as befitted what was the world’s fastest production car, it had a pretty stratospheric price tag, too.

Few supercars at the time felt as fast as the F40. This was partly to do with how violently the turbos suddenly ramped-up the power, giving an intensity to the F40’s acceleration that caught the breath every time. Yet while it should have been overwhelming, it wasn’t, the chassis seemingly dialled in to expect the savage delivery.

It was one of the greatest ever supercars, perhaps the greatest. Ferrari’s order books swelled accordingly and the initial planned production run of 400 examples was blown out of the water. By the time the last road car rolled through Maranello’s hallowed halls, 1311 examples had been produced, nearly five times as many as its 288 GTO predecessor.

While the 288 GTO had been designed with Group B in mind, the F40 was very much a road car first and foremost, even if it did utilise plenty of race car tech and would go on to race in its LM and Competizione forms. Officially the F40 was built to celebrate Ferrari’s 40th anniversary, but in reality it was an Italian two-fingered salute to the Porsche 959. While the 288 was a hugely desirable machine, the Porsche was a technological marvel and posted better figures than the Ferrari, so Maranello responded to wrest the mantle of the world’s fastest car back from Stuttgart.

During the mid-‘80s various prototypes were seen pounding the roads around Maranello. These were essentially modified GTOs, known as the Evoluzione, which were the test bed for the F40 and included many of the design cues that would eventually be seen on the new car when it made its debut in 1987. The eventual design was penned by Pininfarina and it was just about as different as it was possible to be from its predecessor. The low, mean and wide front end flowed via an array of cooling slots and intake ducts to a rear end with a full-width wing and Plexiglas engine cover.

While there was a brutality to its design, it was made from modern materials, its 11 body sections constructed from a combination of Kevlar, aluminium and carbonfibre. These were bonded to a tubular-steel chassis that had the same 2450mm wheelbase as the 288 GTO but with wider front and rear tracks. While the layout was the same as the GTO there was a significant amount of strengthening added to the chassis, with composite materials being bonded to the frame. For the body you could have any colour you liked so long as it was red.

Under the shapely skin and bolted to the chassis was a classic wishbone suspension set-up with coil springs and hydraulic dampers, along with front and rear anti-roll bars. Wheels were centre-lock five-spoke Speedline split rims measuring 8 x 17 inches up front and 10 x 17 at the rear, and they were shod with bespoke Pirelli P Zeros (245/40 ZR 17 and 335/35 ZR 17 front and rear respectively).

Inside, the F40’s spartan race car ethos was continued, with virtually no creature comforts bar a pair of cloth-covered bucket seats. The dash and central tunnel were covered in felt, but otherwise all the interior materials were the car’s plain or painted composite panels and structure. The first batch of cars even made do with Lexan sliding windows, although later cars ditched these in favour of wind-up items. Even the door release catches were a simple pull wire in the bare door pockets – no wonder the F40 tipped the scales at just 1100kg.

There was nothing minimalistic about the engine’s make-up though, with the 90-degree V8 taking off where the 288’s unit left off. There was a modest 81cc capacity increase to 2936cc, although the overall architecture remained the same – twin overhead cams for each bank, four valves per cylinder and twin turbos. The water-cooled blowers were made by IHI, which must have led to some interesting conversations with KKK, who supplied the marque’s F1 team. Ferrari tested both companies’ products and preferred the drivability offered by the IHI units.

The turbos were fed by a brace of Behr intercoolers and the injection/ignition set-up was by Weber-Marelli, and thanks to a slightly higher compression ratio and a rise in boost pressure power was quoted at 478bhp with torque at 426lb ft, gains of 78bhp and 60lb ft over the 288 GTO. The transmission followed the 288 with a five-speed gearbox attached to the rear of the engine. Ferrari claimed a 0-100kph time of 4.1sec and a top speed of 323kph.

Despite being made in far greater numbers than many of the Ferrari icons, this hasn’t held the F40 back from an appreciation in value. Currently you’d be looking at around $1.2million for one of the best examples – a small price to pay for one of the greatest ever Ferraris and the last one to be signed off by the great Enzo himself before his death in 1988.

‘The road is drying fast enough to tempt the unsuspecting driver (me) into waking that Veglia boost needle. In second gear, I push the pedal down, register the needle crossing 3000rpm, hear the gurgle-stammer of flat-plane-crank V8, wonder what all the fuss was about with this shoddily assembled kit car and then with virtually no warning, I’m left wondering if Thrust SSC has just rear-ended me. The car erupts with a violent hissing – like some angry snake – and launches itself forwards.’

‘It all goes nuts behind, the hammery engine note almost consumed by the whoosh and hiss of the blowers. And the chassis twitches and then the rear tyres are unstuck and – this is the magic bit – it feels comfortable with it, and so do you. You don’t back out, you steady your right foot, steady the boost, and the rear wheels paint lines as they scrabble on a smidge of opposite lock this way, a smidge that.’

‘There are dozens of aspects that contribute to the F40’s greatness – among them steering, appearance and historical significance – but once you drive the car, and you find yourself feeding opposite lock into its countless little slithery moments, laughing aloud at how easy it is to do such things in a 478bhp turbocharged, mid-engined Ferrari, you are left under no illusion that the F40 is a better car for being turbocharged. So much of its overall performance, be it objective speed against the stopwatch or the peripheral theatre that comes through noise and even those great silver intercoolers that dominate the engine bay, the car owes to forced induction.’ 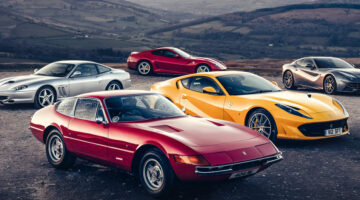 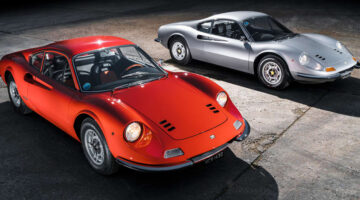