Sebastian Vettel secures his seventh Formula 1 victory of the year at the 2013 Singapore Grand Prix. But Fernando Alonso and Mark Webber grab the headlines… 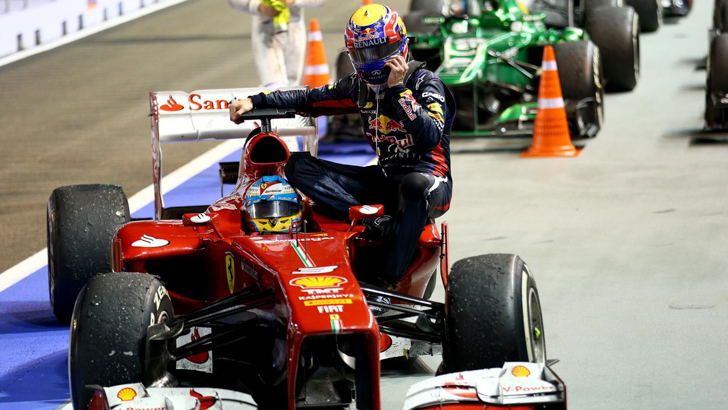 By the time the Formula 1 circus landed for the Singapore Grand Prix, the 2013 Driver’s Championship was a foregone conclusion. Six victories, a further three podium finishes and only one retirement meant Sebastian Vettel had already amassed a 53-point lead over nearest rival Fernando Alonso. A dominant run to his seventh victory around the streets of Marina Bay put the crown yet further out of reach.

Headlines post-Singapore however were dominated by that man Alonso. Though the Ferrari man had no answer to Vettel – who took his third F1 ‘grand slam’ with pole position, fastest lap and leading every lap – Alonso’s tenacious charge to second from seventh on the grid impressed many, as did his sporting behaviour when the chequered flag had dropped. Flagged down by Vettel’s Red Bull teammate Mark Webber, whose RB9 had succumbed to engine issues on the final lap, Alonso dutifully drove back to pitroad with the Australian perched on his side pod. And both were immediately reprimanded for it.

Safety concerns meant this was the right call. Alonso had, after all, slowed on the racing line (albeit after the race), and it would have taken just one car driving too quickly back to the pits for potential chaos to have unfolded. The F1 community however didn’t see it that way. How dare the FIA punish a true sporting gesture, the call came, in the face of ever tightening technical regulations in F1’s ‘clinical’ new world order: far from punishing Alonso’s actions, the FIA should be rewarding them. They didn’t, and for walking onto the track as cars were still circulating, Webber landed a ten-grid penalty at the next race in Korea.

It was difficult not to mull on this decision one month later as Sebastian Vettel – now crowned for the fourth time on the bounce – celebrated a remarkable season by performing post-race doughnuts at the Indian Grand Prix, a similar breach of the regulations. Cue a €25,000 fine for Red Bull Racing…