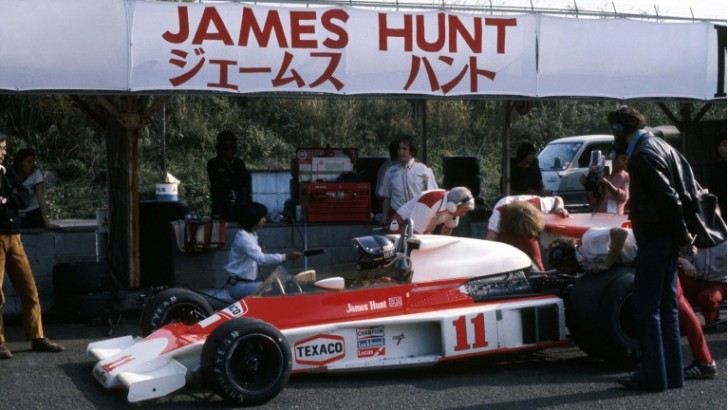 There was no reason for it. His main Championship rival Niki Lauda had pulled into the pits at the end of lap three, unwilling to complete even one more turn in the appalling conditions at Mount Fuji. Many questioned the reigning Champion’s decision, but considering the aftereffects of his gruesome crash at the Nurburgring earlier in the season (he’d even been read the last rites in his hospital bed), few could blame him.

That left Hunt, holding a comfortable lead after beating poleman Mario Andretti (Lotus) into the first corner, holding the all the aces. He just had to keep the McLaren pointing in the right direction. Race retirements for Vittorio Brambilla (who spun his March just inches from Hunt’s rear wheels) and McLaren teammate Jochen Mass (who ploughed into the Armco after hitting a wet patch on the still sodden track at half distance) were too close for comfort though. Easing his pace, Hunt soon surrendered first the lead to Tyrrell’s Patrick Depailler and then second to Andretti. Third was still enough.

At three-quarters distance, Hunt’s tyres started going away. With just over ten laps to go he was dropping time badly. It was a tough choice, but the McLaren team soon called Hunt in for new rubber, much to the Englishman’s fury. Rejoining fifth, Hunt soon passed Alan Jones’ Surtees for fourth, but was simply too far behind race winner Andretti and second placed Depailler. Convinced he’d been cheated of his Championship shot by the McLaren team, Hunt launched into a tirade on pitroad only to be told that third placed Clay Regazzoni’s Ferrari had given up the ghost close only a few laps earlier, and that the Englishman had indeed done enough to claim the 1976 Formula One Driver’s Championship.

Beaten by a single point, Niki Lauda would reclaim his Championship the following season, but it was the 1976 season that director Ron Howard would later base Rush on.