Rubens Barrichello takes his first Formula 1 victory after a little help from a track invader. 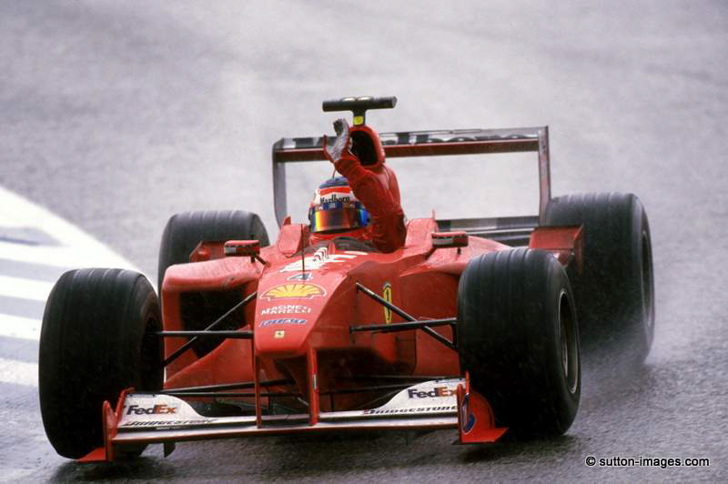 It had been sometime since Formula 1 had seen a track invasion, one over-excited fan almost derailing Nigel Mansell’s debut victory for Ferrari at the Brit’s first attempt in Brazil ‘89. Fast forward to Hockenheim 2000, and an incident that made headline news across the world.

The 2000 German Grand Prix looked set to be a McLaren whitewash, with David Coulthard qualifying 1.3s ahead of the field in tricky conditions, a blinding start from teammate Mika Hakkinen netting the Finn the lead into the first corner, and championship rival Michael Schumacher eliminating himself in a clumsy first corner contretemps with Benetton’s Giancarlo Fisichella. McLaren’s dominant run though would come to an abrupt and bizarre halt though shortly before the first pit stops.

Cameras suddenly cut to a man walking up the track towards turn one, decked in a waterproof with an angry tirade levelled against his former employers Mercedes-Benz. Out came the safety car to clear the interloper, his point very clear made. The major benefactor? Rubens Barrichello, who – with his racecar grounded after an electrical problem in qualifying – had started 18th on the grid in the spare originally set up for Schumacher. The unnamed invader’s public protest had eroded Barrichello’s 30-second disadvantage in one fell swoop, and a brave call on pit strategy when the heavens opened a few laps later incredibly put the Ferrari at the front. No-one could touch F1’s Mr Nice Guy for the remaining 11 laps, Barrichello coming round to secure the first F1 victory for a Brazilian since the late Ayrton Senna’s final victory in Adelaide in 1993. Barrichello’s emotion on the podium said everything….

History would repeat itself in 2003 when the Reverend Neil Horan sprinted onto the Hangar Straight at Silverstone during the race. Once again, the safety car was called, and once again Rubens Barrichello went on to take the victory. An odd good luck charm, but an effective one…