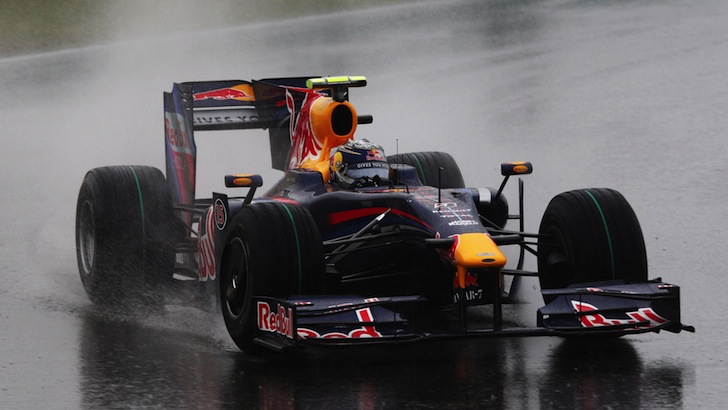 Of his 39 victories (a total that places him fourth on Formula 1’s all-time list behind Michael Schumacher, Alain Prost and Ayrton Senna), 38 for Sebastian Vettel have been with Red Bull Racing. The first – his victory at the 2009 Chinese Grand Prix – proved similar to his debut win at the 2008 Italian Grand Prix with Toro Rosso in its delivery, in that it was pissing down.

Yet to get on the board by the third race of 2009, Vettel led the field away behind the safety car in appalling conditions in Shangahi. The green flag would not be flown until lap 9, at which point pandemonium suitably took hold. As well as spins for Lewis Hamilton (who recovered to eventually finish sixth), Nelson Piquet Jr and Sebastian Bourdais, ridiculously low grip saw Jarno Trulli’s Toyota mounted by Robert Kubica’s BMW, and Adrian Sutil’s Force India stacked heavily in the tyre barriers.

Vettel meanwhile – despite an early glance with Toro Rosso’s Sebastien Buemi – came home to record not only the only win in the first seven races of 2009 not scored by Jenson Button, but also the first F1 victory for Red Bull Racing.

A new era had begun.