Media coverage of motorsport in the United Arab Emirates normally revolves around circuit racing held at Yas Marina in Abu Dhabi or at the Autodrome in Dubai. With a round of Formula 1, 24 hour and 12 hour endurances races, Porsche GT3 Challenge Cup and assorted local racing series, high-end track action is in no short supply. The real deal, however, happens out on the sand dunes.

Sand drag racing is a battle between massive horsepower and very little traction and its popularity in the region could arguably classify it as the national motorsport. The competition is fierce with tuner garages building monster horsepower vehicles and, as you can imagine, tuning a 1000+hp car to be competitive is not exactly a cheap endeavour. The fight for overall victory is therefore normally between a select few of the larger garages with a budget to win at any cost.

All this changed recently when a small, relatively unknown garage from Ras Al Khaimah took the fight to the established tuners and annihilated the competition at the recent sand drag race in Umm al-Quwain. It intrigued me to find out how they had managed to take on the established companies and build the fastest six-cylinder sand drag car with manual gearing in the United Arab Emirates. And, if the rumour was true, they managed to clinch victory without using Nos. 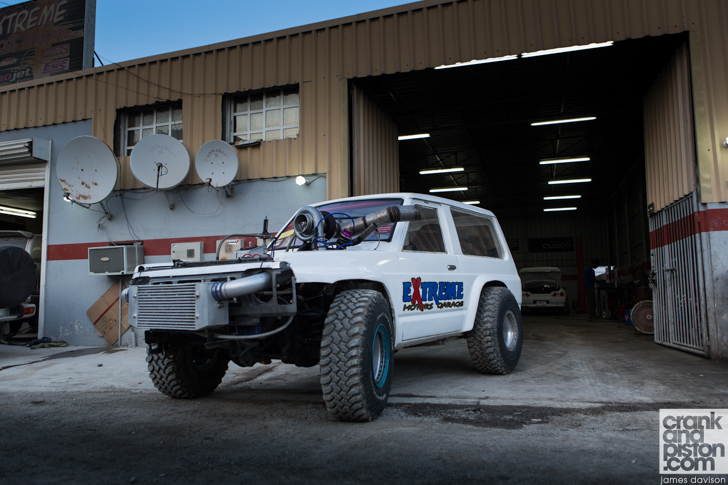 I love the car culture in Ras Al Khaimah and don’t need much of an excuse to visit. You are more likely to see an R30 Skyline cruising around the streets or a drift inspired S14 casually parked up than see a pink Hummer limousine which are unfortunately more common in Dubai than I care for. There is also an abundance of small, back street garages in RAK with teams of mechanics banging away on something that normally grabs my automotive interest.

Extreme Motors Garage initially appears to be just one of these regular workshops but stepping inside reveals several high-end and high horsepower projects being worked upon. Also, if you look really closely at some of the photographs you will see (underneath that massive turbo) a Nissan Patrol. This is the sand drag car that decimated all in Umm al-Quwain.

Speaking to the tuner, Duraid, confirmed the Patrol does not run Nos. And then he blew my mind a little bit by explaining that they had still managed to tune the TB48DE to 1646hp. As sand drag racing is a competitive motorsport, Duraid isn’t too keen on giving away all his secrets but he did walk me through some of the basics of the build. 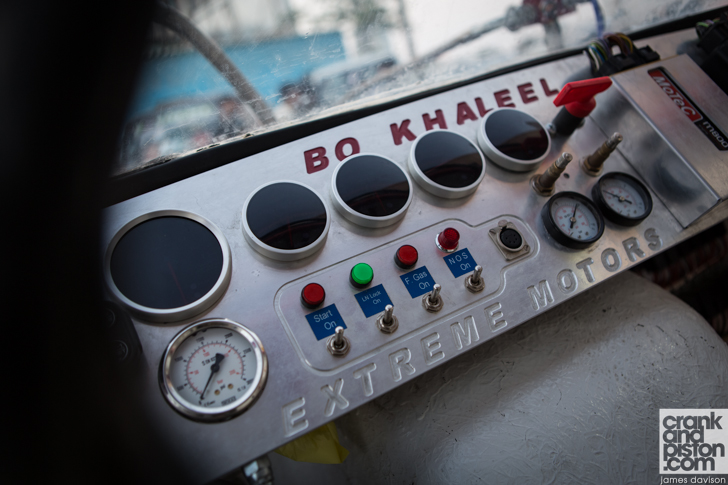 The chassis is stock (as per regulations) but the whole body is fibreglass and the windows are plexiglass. Duraid estimates it saves about 300kg, pushing up that considerable power to weight ratio. From what I can understand, the Patrol uses an OS Giken triple plate clutch and has a heat straightened gearbox but what I really wanted to know is how do you achieve 1646hp without causing disruption in the space-time continuum?

The TB48DE has been through several iterations since Extreme Motors Garage started on the project. Initially they were running Q16 racing fuel and Nos but they were not achieving satisfactory results and a complete rethink was needed. A new block, oversized pistons and aluminium connecting rods were sourced but, surprisingly, this Patrol still uses its stock crankshaft. Many of the other items had to be fabricated in-house as parts availability for 1646hp Nissan Patrols is a bit slim. 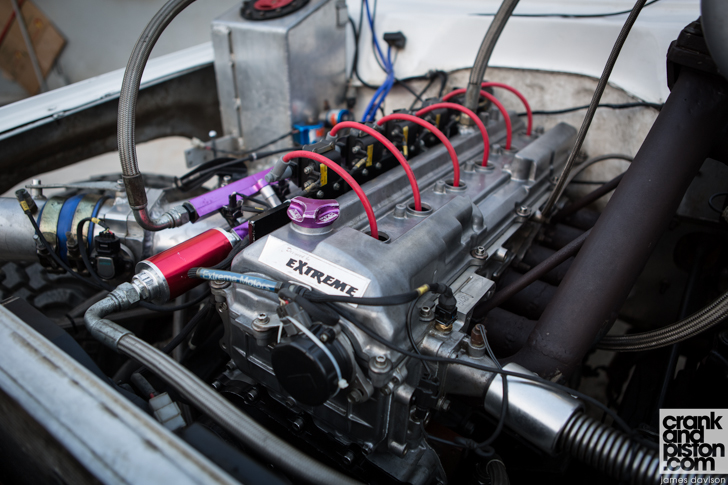 The fuel system has had a complete upgrade with a pair of Siemens Deka injectors feeding each cylinder being an obvious addition that I can deduce. And no, this Patrol doesn’t run on ordinary pump gas. Nor does it run on racing fuel. The fastest six-cylinder sand drag car with manual gearing in the United Arab Emirates runs on methanol. And revs to 12500rpm.

Our thanks to – Extreme Motors Garage