Everything you wanted to know about the McLaren 650S

McLaren’s latest sports car, an evolution of the 12C, is coming. Here are the full details of the 650S.

When McLaren first launched the MP4-12C, it promised to reveal a new product every year. Last year, we got the P1. And in 2014, we get the new 650S. With all P1s now sold, this is the most hardcore McLaren you can buy.

Revealed at the Geneva Motor Show, the 650S is an evolution of the 12C that brings more power, more performance focus and plenty of lessons learned from the P1. It isn’t, however, the mythical P13, rumours about which have been whirling around the internet. That’s something else, something we’ll need to wait longer to hear about.

As the name suggests, the 650S boasts 650PS, or 641bhp from its twin-turbocharged 3.8-litre V8, a rise of 25bhp over the 12C thanks to new pistons and cylinder heads, combined with new exhaust valves and revised cam timing. The weight is down 6kg to 1330kg dry, giving a power-to-weight ratio of  543bhp/ton. The S in the name, should you want to know, stands for Sport.

Carbon ceramic brakes, with vented and drilled discs, are standard, as are lightweight forged alloy wheels that are 6kg lighter than those on the 12C and come clad in bespoke Pirelli P Zero Corsa MC1 tyres. Satellite navigation and LED headlights are also standard, as is an Alcantara interior. It’ll sit above the 12C in the expanding McLaren range, but well below the P1. Oh, and it’ll be available as both a coupe and a spider, the latter of which sports a folding hard-top roof.

As you can no doubt tell from the pictures, the 650S takes a great deal of inspiration from the P1 in its design, most notably at the front bumper, lights and front skirt. The styling at the rear is lifted from the 12C GT3 race car. On the bonnet is a new McLaren badge, inspired by that found on the 1990s F1 hypercar. Inside, the fixed-back carbon racing seats save 15kg over the 12C seats and are based on those in the P1.

“We’ve learned from what we’ve done with 12C and P1 and we’ve put that in the 650S,” Ian Gorsuch, McLaren Automotive’s regional director, told crankandpiston, before taking pains to stress that the 650S is not a stripped out, hardcore racer. It is, he said, a car with performance focus complimented by additional luxury specification. Clear?

Chris Goodwin, McLaren’s chief test driver, explained that the P1 program taught the development team a lot on top of what was learned from the 12C project. “We learned a lot about drivability and what makes a fun drivers car from the P1,” he said. “We were able to look at a lot of different things in terms of hardware, powertrain performance. With the 650S we’ve been able to squeeze more torque and power and work more on the drivability, the feel of the car under your right foot. The wow factor of the P1 is a lot about the response and how you feel it as a driver, and that’s something we’ve worked hard to introduce on the 650S.” 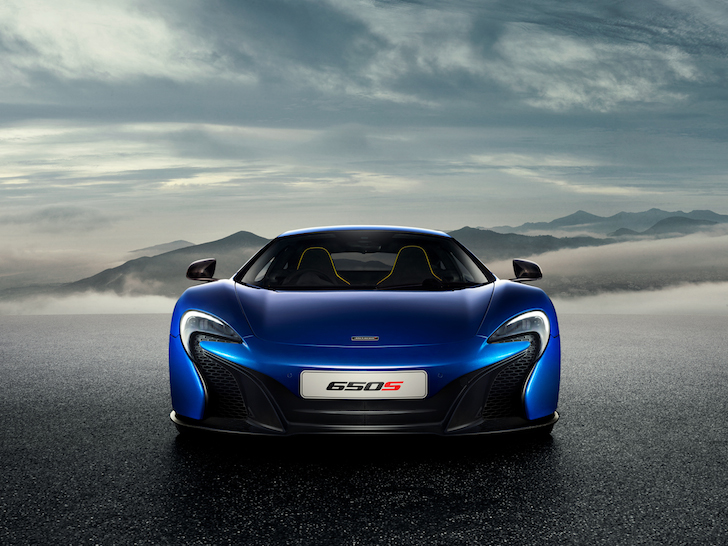 Goodwin said that work had been undertaken on the brakes to give more progressive feel for both road use and trail braking on the track, and that the change in body shape from the 12C has results in more downforce – up 24 percent at 240kph. The rear active aero has been enhanced too, including the air brake, to balance the extra push at the front, while the dampers have been adjusted for a more dynamic, agile feel.

Other changes include new transmission software for faster shifts, and something called Cylinder Cut technology, which produces an aural exhaust flare on upshifts by briefly interrupting the spark and popping the fuel on reignition. McLaren says it won’t cut performance, but will sound awesome.

Drivers fiddling with the ProActive Chassis Control system will find new settings for suspension and powertrain, with a particularly noticeable difference in Sport mode when compared to the 12C.

Think of the 650S not as a 12C Speciale, but more as a logical extension of the aims of the 12C using newfound knowledge. Goodwin described at as “something we might have done had we developed 12C for longer. But 12C had to go to market in that state. This is what the next step would be”.