Could a car without an internal combustion engine ever be considered c&p enough? Tesla’s Model S will embarrass a LaFerrari at the lights, so it’s time to find out: friend or foe? 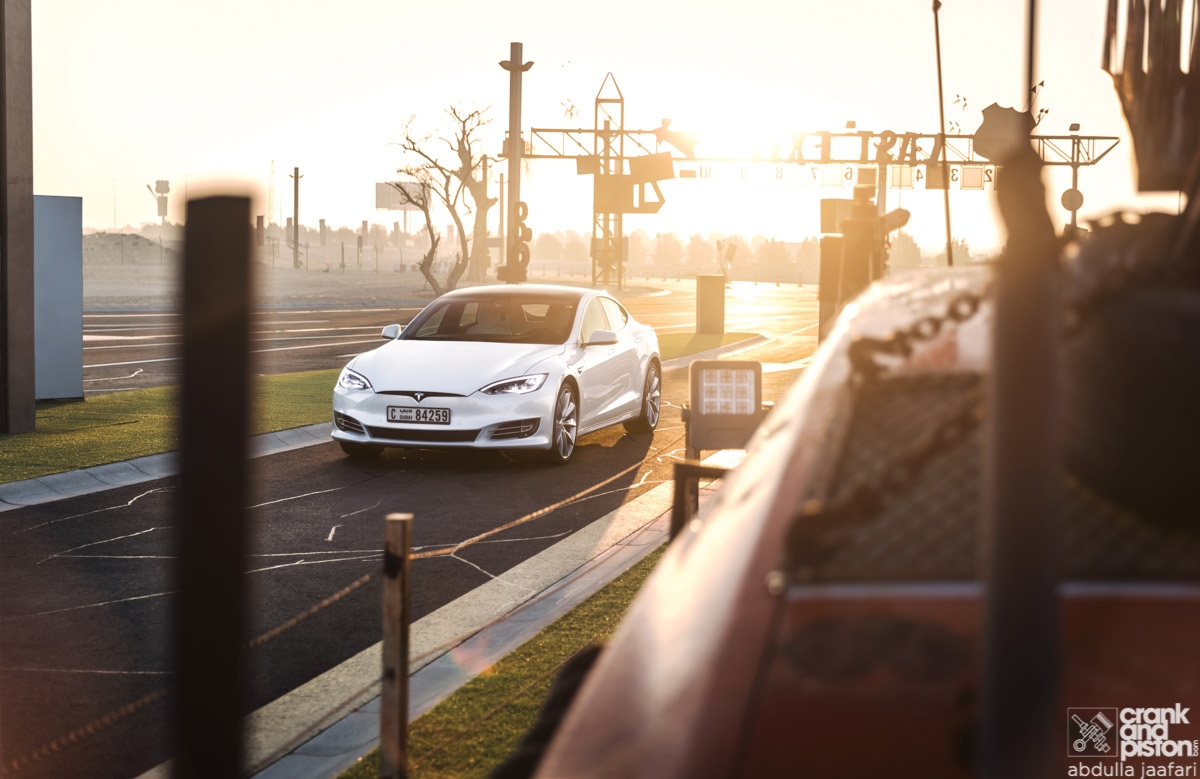 Image 1 of 21
Few car manufacturers have polarised opinion here and elsewhere around the world quite like Tesla. The brand built its first car just nine years ago and now it’s in the UAE with a Dubai sales centre and a government deal that will see up to 200 of the things pressed into service as upmarket taxis over the next 18 months. Yet, when Tesla started out, the very thought of being able (or even wanting) to run an electric car here as a daily driver or public transportation seemed too absurd to entertain.

Over the past decade times have changed in ways we might struggle to comprehend and the world of the automobile has undergone (and is still undergoing) a transformation that leaves many doubting whether the car has a viable future in a world where the impacts of our activities are, at long last, starting to be taken seriously by leaders and legislators. A decade ago, who would have envisaged a Range Rover, Rolls-Royce or Bentley powered by batteries?

Yet here we are, hurtling towards the end of another decade and those very manufacturers (and all the others, seemingly) are busy developing models with no engines – the only way, they perceive, that they can meet increasingly strict emissions controls is to not cause any in the first place.

That there are so many Teslas already on our roads proves there’s a hunger for ‘clean’ technology but the region’s love affair with thundering V8s and bellowing V12s shows no sign of disappearing anytime soon. Which is understandable, given that fuel here, despite recent surges in price, remains almost ridiculously cheap. So unless you’re a geeky fan of Tesla founder Elon Musk or simply want your daily driver to not emit gasses that are killing our planet, why would a Tesla feature on your wish list?

The answer, even for dyed-in-the-wool petrolheads who drift off to sleep thinking about flat-plane cranks and manual gearboxes, is obvious when you stamp on the throttle of a Model S P100D. There’s a clue in the nomenclature: P is for Performance, 100 tells us that the battery pack generates 100kWh, while the D means Dual – in other words there are two motors powering either end, giving this version four-wheel-drive.

With a couple of quick taps to the enormous infotainment screen that sits upright in the car’s dashboard, you can select the infamous ‘Ludicrous’ mode and, when the batteries are warm enough, if you keep your finger pressed for a few seconds you can select ‘Ludicrous Plus’, when a question appears on the screen: “Are you sure you want to push the limits?” followed by a warning: “This will cause accelerated wear of the motor, gearbox and battery.”

Underneath this text are two buttons, one coloured blue that reads: “No, I want my Mommy”, the other red that says: “Yes, bring it on!” This isn’t my car, it never will be and, as I’m reporting on it for evo, where it’s all about The Thrill of Driving, I feel it’s incumbent upon me to take the red pill, press that button and see just how far down the rabbit hole an electric car can take a cynical driving enthusiast and motoring hack.

I’m alone on a long, straight stretch of private road on the outskirts of Dubai, so I know it’s as safe as it ever will be to carry out this ramshackle experiment and, while at a standstill I floor the throttle and let go of the brake. Immediately my head is thrown back into my headrest and the sunglasses that had been perched atop my cranium are flung onto the rear seat. The physical forces at play as the Tesla deploys all of its 687lb ft of torque in one go, pin me back and, as the front tyres struggle to maintain traction, I have to wrestle the steering wheel into submission while my surroundings become a Technicolor blur. Ludicrous? It’s hilarious.

I’ve experienced this kind of acceleration before. Once in a Bugatti Veyron Supersport, another time in a Caparo T1 and again while aboard the Formula Rosso, which is the world’s fastest rollercoaster at Ferrari World in Abu Dhabi. It’s brutal, with 100kph coming up in 2.4 seconds. You read that right; it’s not a typo. Put this car on a drag strip up against the world’s quickest hypercars (as some already have) and the two-tonne, five-door family hauler will destroy them all.

We could just leave it at that, to be honest. As the world’s quickest production car the Model S P100D offers the kind of slingshot power delivery that a Veyron, Chiron or 918 Spyder owner would have had to pay at least ten times the Tesla’s price for. In that respect it could be deemed a bit of a bargain, even at $150,000 before you start on the options list.

For me, though, there’s a further experiment to be carried out, in order to really see how far electric car technology has come in the past five or six years. Back in early 2012 I borrowed a blue Tesla Roadster from a company called Green Car Rental in Dubai. I was working in the centre of Abu Dhabi at the time and wanted to see if an electric sports car could realistically be used for the daily commute.

The theory was simple: drive it from Dubai to the office (a journey of about 80 minutes), charge it up while at work and drive it home.

In practice it was a disaster. The car wasn’t fully charged when I picked it up but there was enough (just) to get me to the next emirate, so long as I was sparing with the throttle. By the time I arrived the range available was about 60km, so there was no option: it needed charging and, I reckoned, eight hours should be enough. I’d been advised that a 15-amp power supply would do the trick but, after more than an hour of fiddling with plugs, cables and sockets, the most we (me and two of my company’s electrical engineers) could summon was 10, thanks to the city’s less than ideal grid system. I had to scrounge a lift home (and back to work the following day) with a colleague and, all told, it took 30 hours of constant charging for there to be enough power in the batteries to get me back to Dubai. Fully charged there was enough for a theoretical 220km.

Previous ArticleNew BMW M5 review – is 4WD and 592bhp enough to raise the super-saloon bar?
Next Article New Lamborghini Urus SUV revealed in full – due in 2018