The Jeep Wrangler is undeniably an icon on and off the tarmac, with a legacy that stretches back to 1986 when the first generation was introduced by what was known as AMC (American Motors Corporation). Even today it remains almost stubbornly old fashioned and basic in its construction, still having a separate body and frame, and live rigid axles that make for high flexibility in challenging terrain. It’s as basic and capable as any new vehicle gets and, like any true icon, is instantly recognisable for what it is all over the world.

Its evolution has steadily continued until todays JL, the first new generation Wrangler since 2006. The original Wrangler set a benchmark in the four-wheel drive market, making it desirable, not only to surfers and hipsters, but also within the serious off-road community. Its recipe has always been incredibly simple and that simplicity has been key to its success over the years, so has Jeep managed to modernise the Wrangler without ruining what made it so special in the first place? Selflessly I’ve headed to Austria to find out, exploring the new model’s capabilities both on- and off-road.

The design differences are subtle, amounting to little more than a refreshed grille with headlights that cut into it slightly, and newly positioned driving lamps and indicators. Power is supplied by a reworked 3.6-litre Pentastar V6 engine or a 2.0, turbo’d in-line four, mated to an updated eight-speed automatic (other markets get a six-speed manual) and Jeep has announced a plug-in hybrid Wrangler for 2020, which would be an interesting vehicle to see on our region’s off-road terrain. The engine updates come with auto start/stop technology and transmission shift management.

Inside, a redesigned dashboard provides a cleaner instrument cluster and rearranged console switches that make it more intuitive. The materials have a good quality feel, while still allowing the wiping and spraying off of mud and dirt, and it maintains the off-road and adventure look and feel both inside and out, while being a comfortable ride for anyone whose only off-road experiences amount to going across dusty parking plains as a shortcut for getting in line for the school pick-up.

But off-road is this car’s natural habitat, where its only natural rival might be a Land Rover Defender (RIP) and Jeep has its own trail here in Austria, where I get behind the wheels of both the Rubicon and the more luxuriously appointed Sahara variants.

Under its bonnet is that lusty 3.6-litre, in-line six, that delivers 285hp and 260lb ft, deploying that power and torque via an eight-speed automatic that delivers smoothly across the rev range with only a slightly perceptible delay in the mid range. The Wrangler’s approach angle of 36.4 degrees and break-over angle of 25.8 degrees, would enable the Rubicon, with its well articulated suspension, to literally drive over a ‘mini’ category vehicle with ease but today we are going through muddy tracks, with locked differentials, without a slip. It feels well balanced with four or three wheels on the ground and its power delivery while engaging in the trickiest maneuvers is even and smooth, not aggressive or hesitant.

The JL has a three-metre wheelbase and ground clearance of 274mm. Steep inclines and drops, long arm climbs, three wheels on the ground, two wheels in the air, soft and compacted terrain, deep mud and sand – any and all obstacles are taken almost too comfortably in this machine. The drive assist systems are so well adjusted and their effects so subtle that it’s easy to start thinking you could take part in an expedition into remote areas without a worry in the world. Hardcore off-road experts might lament this electronic assistance but, for the rest of us mortals, the systems open up the Wrangler’s incredible abilities and allow it to be enjoyed in complete confidence.

IT doesn’t try to be a Grand Cherokee, but the design team has found a nice balance between the off-road and adventure feel, and the comfort expected from a daily driver. Mercifully, the recipe responsible for the Wrangler’s success and legendary status has not been ruined at all – it’s just been tweaked here and there to make it more relevant than ever. It remains a remarkable vehicle, only better than the one before it. That’s what evolution is all about, after all. 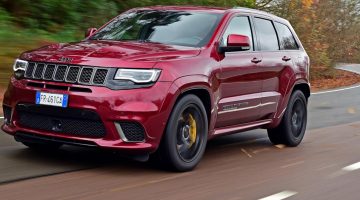