The new brand is pinning its hopes for attracting younger buyers on this “compact” luxury saloon – is it good enough to tempt us?

No, it’s emphatically not a Hyundai. It’s a Genesis. Which is a bit like saying an Infiniti isn’t really a Nissan, or that a Lexus isn’t a posh Toyota. And it’s a shame that companies feel the need to resort to such marketing tactics because Hyundai and Kia stopped being the butt of jokes a long time ago. They’re both genuine, worthy contenders in the space occupied and dominated by their Japanese nemeses.

Genesis was launched as a standalone brand less than three years ago, having previously been the name given to two Hyundai models, a coupe and a luxury saloon. And it now has three models from a planned range of six, all with a G prefix: the large G90 saloon, the executive G80 and this, the new G70 that should, by all accounts, be quite the entertaining steer.

It certainly looks striking and aggressive, despite the overly fussy nose, and much more pleasing to the eye in real life, compared to any photograph. It’s a car that interests onlookers, who like what they see but can’t work out what it actually is. And what it is, is the first genuinely new vehicle from the newest luxury brand on the market. No pressure, then. 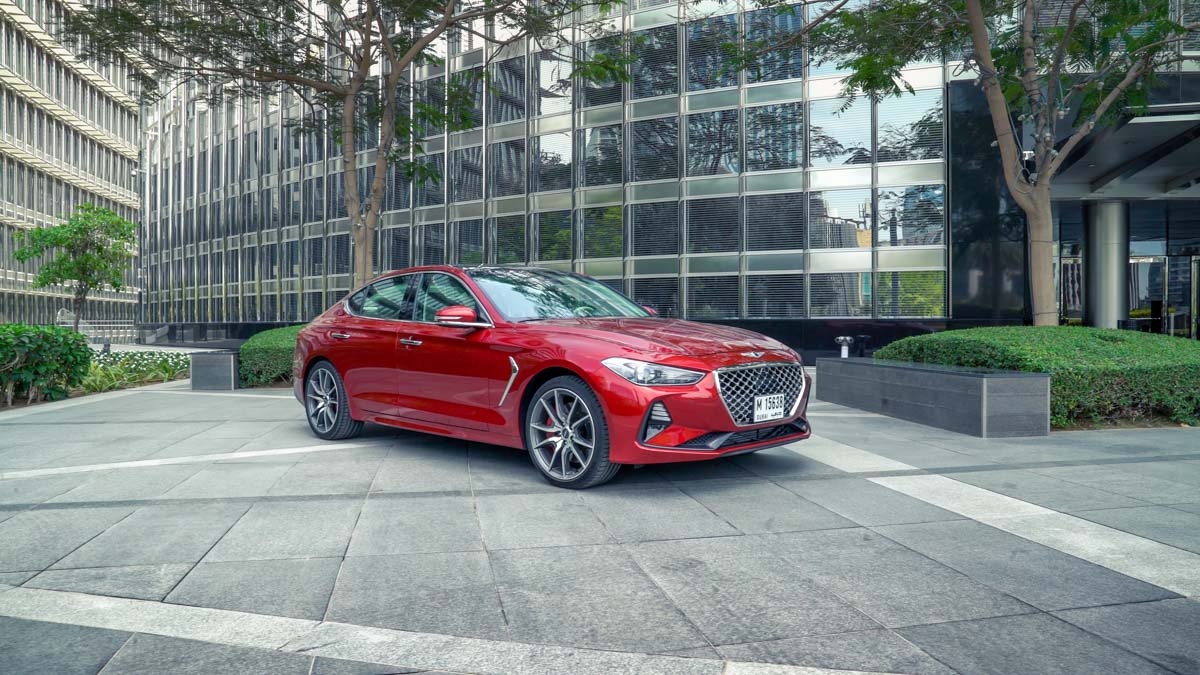 Two versions are available: a four-pot, blown 2.0-litre and a turbo’d 3.3-litre V6, which is obviously the one I grab the key for. A quick walk around confirms its visual appeal, nicely finished off by a pair of sizeable exhaust pipes set within the rear valance. It’s clean, elegant and magnetic – better looking to these eyes than many German sports saloons costing much more. Inside, the design continues to impress, with a distinctly premium Euro look and feel. Diamond-quilted leather covers the hugging seats and door inserts, and the smart instrument cluster houses analogue dials, flanked by a head-up display and a 7-inch central infotainment screen. Large families are best using something else, though, as the rear quarters are compromised by a lack of leg- and especially foot space.

The sonorous V6 is mated to an eight-speed auto that sends the firepower to all four corners, although the system is thankfully very biased toward the rear. With 365hp and nearly 400lb ft at its disposal, it’s good for a 0-100 dash in under five seconds and won’t stop gathering pace until it’s reached a pretty impressive 270kph. Impressive Brembo stoppers are at the ready for when things need to be calmed down a bit, but there’s a playful edge to its character when tapping into its reserves that means the brakes are rarely on your mind. Rather, you can revel in the control afforded by its well sorted chassis, with delicious dollops of oversteer there for the taking should there be sufficient provocation.

All in all, the G70 is a really enjoyable machine in which to hoon around or do the daily grind. IT’s well made, fast, entertaining and reeks of premium quality inside and out. On the basis of this, Genesis could well become one of the most exciting new names in the motoring world. A job well done.