Hitting the wall is par for the course in motorsport. Doesn’t matter how long you’ve been in the sport, at some point you’re going to crumple the bodywork. Unfortunately for Nelson Piquet Jr, after the fallout that followed the Renault team’s antics at the 2008 Formula One Grand Prix in Singapore, hitting the wall will always bring back parts of his hitherto high-profile career he’d rather were laid to rest.

Interestingly then that when the Brazilian wrapped his NASCAR Camping World Truck Series entry around turn four of the Charlotte Motor Speedway, it was the car’s livery itself that most of the crowd focused on. As part of a publicity event arranged by ‘Nelsinho’ Piquet’s primary sponsor Alpinestars, the guys at Death Spray Customs designed a one-off livery for #30 Chevrolet Silverado and racesuit in which he would race, as this video shows. You may also find the special insight into Junior’s racing mentality interesting too.

He may not have finished under the spotlights at Charlotte, but Piquet Jr did became only the fourth non-American driver to win a race in NASCAR’s second tier Nationwide series at Road Atlanta just a few weeks later. 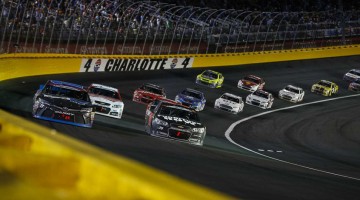