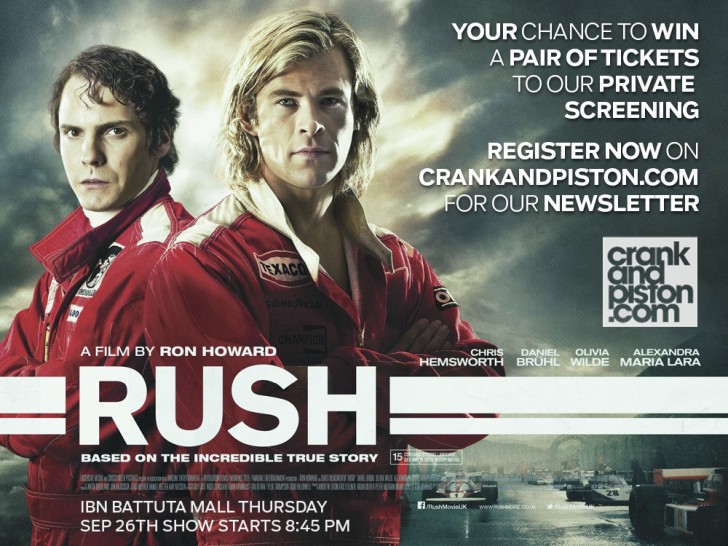 If you’ve been keeping an eye on the internet of late, you’ll know that petrolheads world-wide are agog with anticipation at seeing the new Formula 1 movie, Rush. Starring Chris Hemsworth (Thor) and Daniel Brühl (Inglourious Basterds), and directed by Ron Howard (A Beautiful Mind, Apollo 13), Rush tells the story of the 1976 Formula 1 battle between Britain’s James Hunt, driving for McLaren, and Austrian Niki Lauda in a Ferrari. It was one of the most dramatic and intense seasons the sport has ever seen, and judging by early reviews, the film more than does it justice.

Not wanting to miss out, we’ve hired a cinema to show it. And we’d love for you to come and join us. Our special showing of Rush – just a day after the premiere – will take place at the Grand Megaplex, Ibn Battuta, Dubai on September 26th.

All you have to do to enter the draw to get a pair of tickets is register for our Newsletter, by clicking the link below. We will then contact you direct through the email you leave us with the good news.

REGISTER HERE FOR A CHANCE TO WIN RUSH TICKETS

No cash alternative. Winners are responsible for their own transport to the cinema (i.e living in the UAE would help). Anyone expecting to see the rock band Rush will be disappointed. Everyone attending must be awesome.