The sheer number of barely-contained smug tweets we’ve been reading over the last few days suggests that it’s Le Mans Classic time again this weekend, an event where some of the desirable, successful, powerful and just downright sexy machines the racing world has to offer descends on La Sarthe for the second most famous motor event of its calendar year. The rest of us have little choice but to sit at home, watch the live stream, and dribble uncontrollably with both lust and envy. And I apologise for the image that’s now circling in your mind’s eye.

Having said that, an hour or two rummaging through YouTube’s backlog is another way to go, particularly since it unearths little gems like this. The circuit is Paul Ricard (we think), and the car is a 1990 Nissan R90 CK.

Now in Group C’s illustrious history, the R90 has to lean heavily on its two All Japan Sports Prototype Championship, since quite honestly, its World Sport Car Championship and Le Mans campaigns didn’t fare too well. Give or take a podium here or there, European success was fleeting for the R90 CK (the low downforce R90 CP is actually credited for those 1990 and 1991 AJSPC titles). It was, however, brutally quick, a VRH35Z twin-turbo V8 bolted to a Lola-designed chassis making it significantly quicker than the R89 on which it was based. 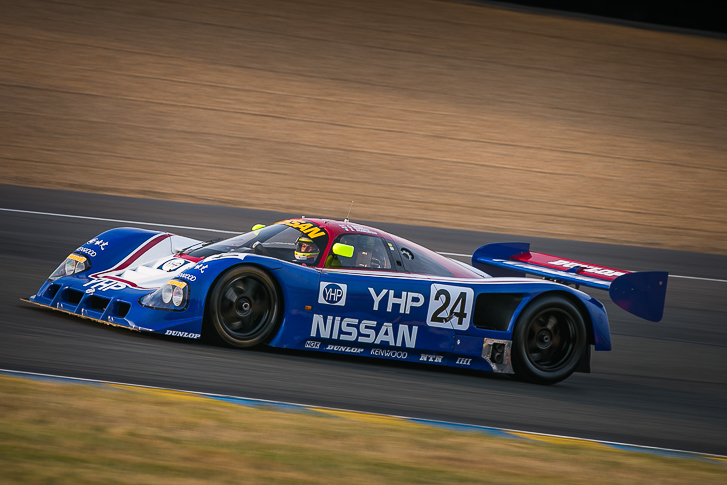 There’s also Mark Blundell’s pole position lap at Le Mans in 1990, in which a pair of stuck waste-gates tipped power output from ‘yikes’ to ‘holy crap’ (or 1100bhp, if we’re being pedantic). So yes, the pristine ’90 R90 CK in this on-board video is quick. VERY quick. The way the windscreen wiper flexes on the main straight is particularly hypnotic…

Even with a 1000bhp-plus 3.5-litre twin-turbo V8 blasting the hell out of your eardrums, this is still a bold on-board video. In that it actually begins with a trip through the gravel, our driver – Katsua Kabota, we believe – downshifting, late-braking, and dipping the front right onto the kerb, the back end gracefully overtaking the front into the first turn on one of the most powerful and desirable Group C cars ever. While this would be a brown trouser moment for most of us, we-think-Kabota simply guns the throttle and muscles the Nissan R90 back onto the track for another hot lap. THAT we’d call pretty legendary…

The ultimate driving game? Remote controlling a Nissan GT-R with a PS4 gamepad