BMW 435i vs Lexus RC vs Cadillac ATS

Monopolies are tedious affairs. Is the BMW 4 Series still on top of the mid-sized sports coupe world? Or can Cadillac’s ATS Coupe or Lexus’ RC 350 F-Sport take the crown?

There are certain models around which categories naturally seem to form, the Porsche 911 and the Volkswagen Golf GTI for instance holding fairly prominent bulls eyes. And to this list, with the departure of the 3 Series Coupe, you can also add the BMW 4 Series. With category benchmarks though come rivals, circling menacingly with bigger engines, better pricing and options lists, and a dash more flash. Just as Michael Schumacher faced a young Spanish upstart after securing five Formula 1 titles on the bounce, so Sébastien Loeb fended off a former teammate in VW colours, and Lance Armstrong battled…steroid abuse charges, okay bad example.

Previously rivals had been incapable of wrenching those crowns free, but with a dearth of new models entering their respective segments, times are changing. Against the 911 goes the Nissan GT-R and the new Mercedes AMG GT, whilst the Volkswagen Golf GTI now faces opposition from the Focus ST and Renaultsport Megane among many others. For manufacturers, monopolies are much harder to retain than arguably they once were.

It’s appropriate then that, as our convoy heads across crankandpiston’s usual stomping ground for group tests, the BMW 435i up front looks like its being hunted by the two opponents in its rear-view mirror: the Cadillac ATS Coupe and the Lexus RC 350 F-Sport. 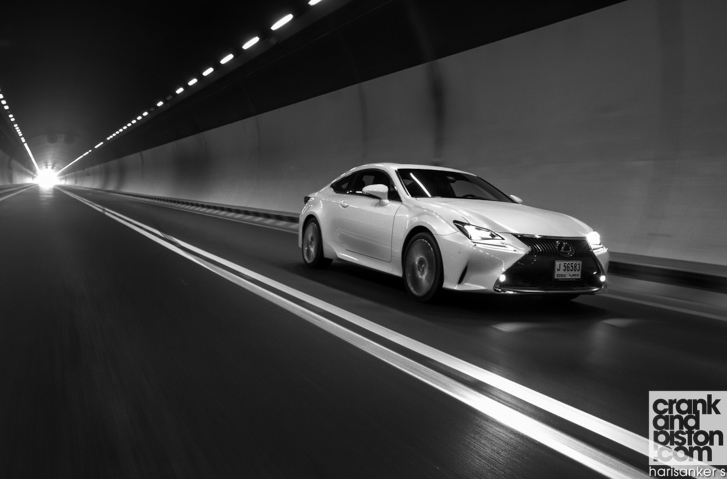 For the opening tour I’ve set up station in the newbie (the Lexus), and as we found in the RC F we drove earlier this year, company designers have left few ‘L-finesse’ design language stones unturned. Everything is beautifully bolted together and stylishly designed, save perhaps the touchpad that controls the media system and satnav (I personally found the old system much easier to use) and the pseudo bucket seats that are mounted too high for those of us over six-feet tall. It’s cosy and yet a little frustrating at the same time, a setup similar in many ways to the BMW. Munich’s build quality is as good as ever and the 435i, as well as offering the most comfortable seating of the three, houses more room in the back too (the sloping roofline of both the Cadillac and Lexus mean you probably won’t complete too many long journeys in the back). And yet in our 435i test model, whether it’s the beige leather upholstery, the faux aluminium detailing, the button-heavy centre dash or the i-Drive satnav that could rip sanity from most of us, there’s just a bit too much going on for things to be truly elegant.

It’s a big difference to the GT-esque levels of refinery we find in the Cadillac. Indeed, it was the chic styling and polished interior – following years of rather drab GM design – that endeared us to the ATS saloon when it first arrived three years ago, areas into which Cadillac has massaged yet further life for the coupe. The rear seatbelt at ankle level is an accident waiting to happen, granted, but a supple ride quality, bags of room up front and Cadillac’s intuitive CUE system mean it’s easily the most civilised.

Refinement only though does not a benchmark make, and while the Cadillac scores top marks for its interior and the Lexus is arguably the best-looking (those rear fender air grooves do call to us…), to out-drive the BMW 435i – a model we’ve lauded many times on crankandpiston.com – is a tricky proposition.

Take the Lexus for instance, the steering of which feels light in the tighter corners on our test route, the car as a result discernibly harder to place with enormous accuracy. Front-end grip is there though and with the 3.5-litre V6 up front producing 306bhp, there’s more than enough oomph to unsettle (and slide) the rear end simply by turning in sharply. It’s a fidgety process though, for what I had expected to be a graceful and controllable glide is being neutered by the Vehicle Stability Control, which kicks in with all the subtlety of a rap across the knuckles. I find out only later that VSC can be disabled entirely but this involves a mesmeric dance across the middle pedal and parking brake, recognisable only to those trying to unlock all weapons on Call of Duty. 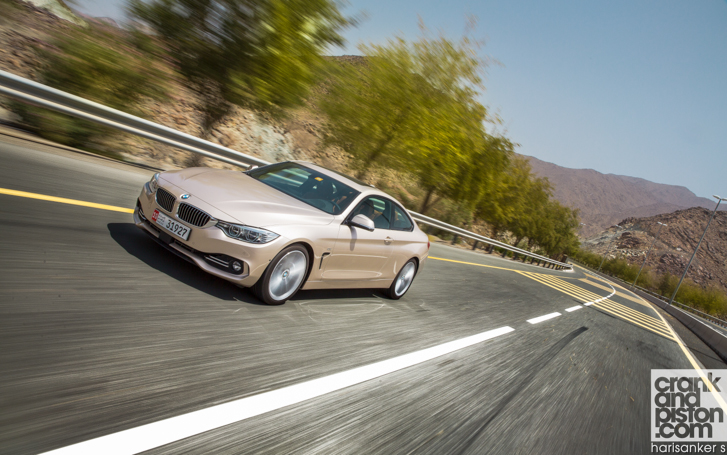 It’s a notable difference to the more precise placement involved in the BMW, whose front wheels lock onto line in much the same way whilst making more demands of your attention. Inputs at the wheel are both heavier and busier given the darting nature of the rear wheels as the same 306bhp is sent rearwards (the Cadillac outguns both by 15bhp). Less so in Comfort where the suppleness of the suspension means a cushioned ride and the power-assisted steering offers less immediate feedback, but more so when we hit the top shelf Sport+. Mercifully the Beemer’s traction control is less pernickety than in the Lexus, and even when traction is broken, which really isn’t hard through the tighter corners, counter steer and a squeeze of the loud pedal brings them back into line with ease. It’s the extra commitment this encourages, plus the more taut suspension and chassis, that differentiates the 435i from the slightly more serene RC 350. With the BMW, there’s significantly more drama.

Through the sweepers however the Lexus does regain some of its lost composure, the steering – though still too light even in Sport+ – is nevertheless nicely judged, good balance allowing for more energetic turns of speed. Grip at the front is similarly absolute to that of the BMW, the rears not jinking quite as vigorously as the 435i nor as regularly, but traction nevertheless impressive and understeer rarely proving a factor. Through the long sweeping turns the Lexus might just have the edge over the slightly heavier Beemer, but even through here, the drive feels more relaxed than that offered by Munich.

I confess that, impressed as we were with the ATS Coupe on its release, I had my doubts that the least performance-focused of the three would comprehensively out handle its rivals today, even despite being lower and longer than its four-door alter-ego. An assumption that, once I jump aboard, is quickly binned. ‘Tour’ or ‘Sport’ are my only drive mode options (‘Snow’ in mid-40 degrees seems a tad redundant), and in ‘Tour’ at least the steering is a little on the sloppy side through the short-sharp switchbacks. In Sport mode fortunately the steering weights up, offering much more consistency and connection to the road through the turns, hooking up the front end nicely as power is fed in. Corner entry and exit speeds are beautifully smooth as the rears remain inline, Cadillac having retuned the steering to fade out the slightly over-servo-ed feel at high speed found in the saloon. The widened rear track proves its worth too, superb amounts of balance making me wonder why Cadillac offers an all-wheel drive version when its rear-wheel counterpart feels this direct. 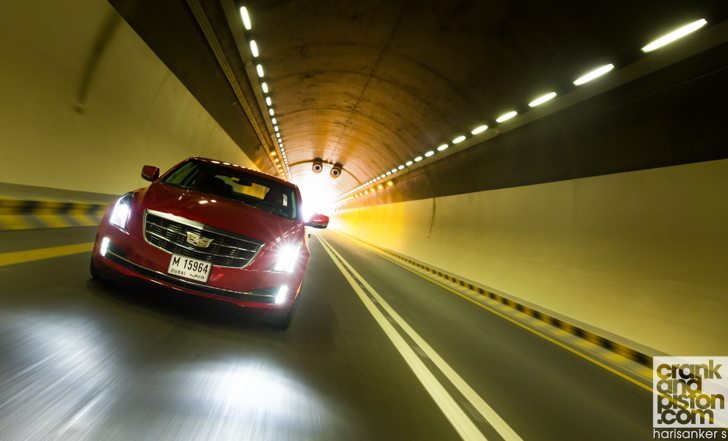 With this less tail-happy agility though comes tauter suspension: nice and gloopy in Comfort but just rigid enough in Sport to make the ride jostly over the rougher stretches of asphalt we come across. There’s also the manner in which our highest-powered model here puts the horsepower down. Again, limited slip and few traces of lag mean the Cadillac’s bite off the line is impressive, shaded only perhaps by the BMW’s 3-litre six-cylinder. True, having jumped back in the BMW again, the engine’s metallic hum is less charismatic than the slightly more melodious V6 wail in the Cadillac, but punch from standstill is more robust and more insistent than either the Lexus or the Cadillac, the BMW reacting with more eagerness under heavy acceleration. There’s that sense of drama again.

Not that the 435i is dropping the Cadillac on the straights though. The responsiveness of the ATS’s throttle under acceleration is slightly more passive than the 435i but 0-100kph differences are miniscule thanks to smooth changes through the six-speed automatic. Once again though, shifts through the BMW’s eight-speed automatic are crisper, the ratios less spaced and torque appearing much further down the rev range, allowing smoother, more assertive turns of speed than the ATS can manage.

In the Lexus meanwhile, it’s a different story. Performance figures are no less impressive than its rivals here today but truth be told, that 3.5-litre V6 just doesn’t feel fast enough. Indeed, far from being overly abrupt, changes through the eight-speed automatic are beautifully smooth, ironing out any potential drops in momentum as a result and creating, at cruise at least, a silky smooth ride better than that found in either the BMW or the Cadillac. Stay in the high revs though if you’re looking for signs of life from the Lexus V6. The engines linear acceleration is not unpleasant by any means, just a little softer and more remote than we’d been expecting: unless you’re in the upper reaches of the rev range where the true bite can be felt (peak torque appears well over 4000rpm), there’s no real sense of urgency. 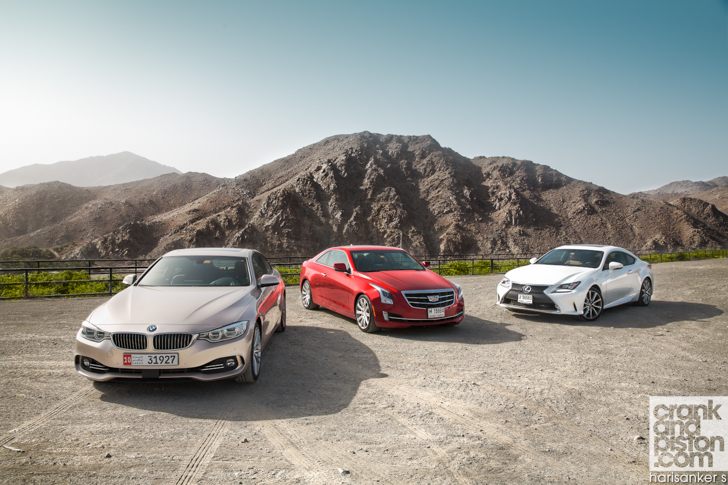 Ultimately it’s difficult to give the nod to the Lexus. It’s stunning to behold, is well balanced through the longer turns, offers probably the best ride comfort (despite the mounting of the seats), and you can coax some life from the V6 if you stand on everything. As an everyday model, the refinement and comfort of the drive marks the RC 350 F-Sport out as probably the model most suited to day-to-day drivability. A question mark lingers over the thrill of driving it produces though.

The Cadillac on the other hand is another matter. A newboy the ATS Coupe might be, but it boasts the most elegant cabin, nice responsive steering, vigorous turns of speed and surprisingly direct handling: that it could keep the BMW in its sights came as a bit of a surprise to all of us. Still though, formidable as the ATS has proven, it too doesn’t quite make the grade. Sharp enough, yes, but slightly less smooth power output, less direct changes through its six-speed box and a hair more lean means it can’t quite overhaul the 4 Series either. It gets close, it gets very very close, but the benchmark is still out of reach.

For BMW then, the deft balance between comfort and potency, sharp handling and a slightly wayward back-end means the 435i retains its bulls eye, even despite an unnecessarily complicated cabin design and a rather neutral character in Comfort. How long it remains the benchmark, given opposition from not only old rivals Audi and Mercedes but comparatively new ones from Cadillac and Lexus, remains to be seen.