Does the BMW M6 Gran Coupe live up to M car expectations? crankandpiston takes the Beemer for a spin on home turf to find out.


We cannot display this gallery

Sounds familiar, doesn’t it? Regular readers of crankandpiston.com may even now be musing ‘didn’t they cover the BMW M6 Gran Coupe not too long ago?’  Yes, of sorts. There was, however, something needling me during our drive with BMW Club UAE that I couldn’t quite put my finger on at the time, but which struck me a few days ago.

You may remember that early last year we took a spin in the then-new F10 BMW M5, and we thought it was really rather good. There was a problem though. While it was technically brilliant and superb to drive it was also, well, a little dull. It was so controlled and composed that the traditional lairiness of BMW’s hyper-mental M brand had almost sunk without trace. It was with a little cynicism then that I took the company’s new M6 Gran Coupe for a spin on home turf.

Powered by a 4.4-litre turbocharged V8 that spits out a sizeable 552bhp and 502lb ft of torque, the BMW M6 Gran Coupe – the first M version of BMW’s sole four-door coupe– will demolish 0-100kph in 4.2 seconds and boasts an electronically limited top speed of 250kph (or 305kph if you plump for the slightly racier M Driver’s Package). To put that into context, this luxury coupe will hit 100kph quicker than a Jaguar F-Type V8 S. 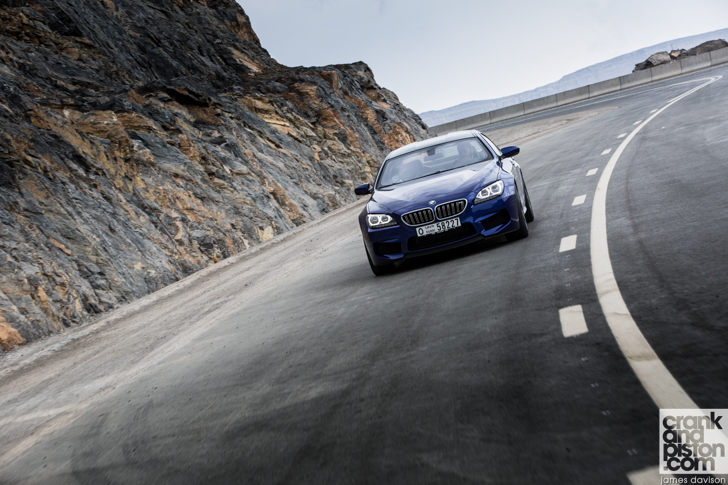 Power-wise then we’re off to a good start, one that continues with the look of our San Marino Blue test model. There’s a beautiful flow to the subtle bodylines, air-intake festooned front bumper and strikingly carved headlights, offset by the M6 badges on the kidney grille, front fender and bootlid. The rear is handsome if a little pinched, and I do wonder if the gold calipers are necessary against the 20-inch M light-alloy wheels. The profile though is simply extraordinary: it’s the kind of design you want framed and hung on the office wall.

Inside, the minimalist(ish) centre console and i-drive rotary dial make tuning the radio a doddle, and I’m particularly keen on the centre speaker that rises out of the dashboard. There’s plenty of headroom up front though a little extra in the rear wouldn’t hurt, and the seats offer good lumbar support. I had worried that the ‘luxury’ M6 Gran Coupe – complete with two-zone climate control, a Bang & Olufsen surround sound system and Merino leather upholstery – would include a high-seating position for a softer ride. Happily the electric seats sink almost to the carpet, giving me a driving position that’s comfortable yet still envelops the cockpit around me. The wing mirrors and rear window are a little tighter than I’d expected but there’s still just enough visibility. 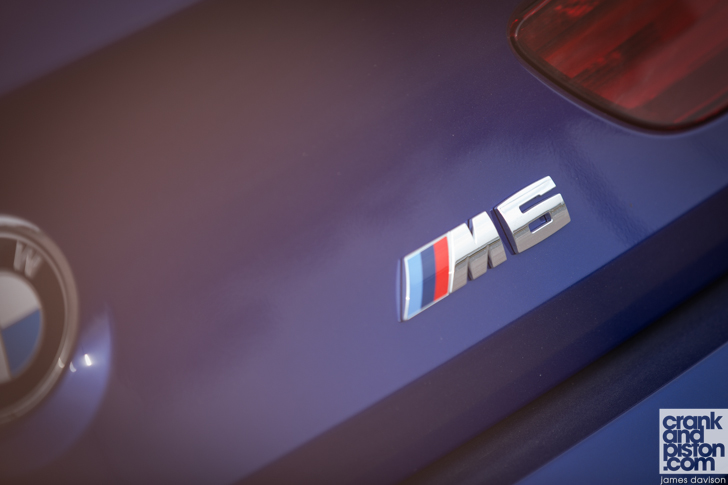 One of things that makes the M6 Gran Coupe so elegant is that long nose, which as it turns out can prove a double-edged sword. The distance between the grille and driver’s seat takes up a third of the overall 5011mm wheelbase, and the front wheels can feel a little disconnected as a result. Having said that, there’s lashings of grip through the tyres, superbly balanced weight distribution, good hefty feel to the steering and only trace amounts of bodyroll. Get on the brakes nice and early and the front end is easily pointed towards the apex of a corner, pegged there as the power is fed back in. The Gran Coupe is weighty at 1875kg and understeer can strike from time to time, but the nimble nature of the Gran Coupe catches me completely off-guard. I was expecting a land barge that had to be elbowed round turns rather than pointed. I was very mistaken.

The rear end on some of the sharper corners can get a little frisky (even despite the Active M Differential, which splits engine power between the rear wheels to optimise traction), bringing with it some of the fun lost with the M5. The M6 Gran Coupe is less on the nose and a little more lairy as a result, especially when you select Sport Plus and thus make gearshifting, steering and throttle response more ferocious.

All this pales into relative insignificance though compared with the powertrain. The power. Oh, the power! Hit the loud pedal from standstill and you’ll feel acceleration build steadily rather than abruptly in the lower revs. Then you’ll hit the high numbers, which brings with it a hit from the turbocharger. Select second and the response is phenomenal, the force of the uptake pushing you back into the leather as you make your way through the gears until things start to calm down a little in fifth. It’s addictive, no other word for it. The gear changes too, when in their most ferocious setting are like snapping off rounds from a rifle, each beautifully sharp and accompanied by a little ‘bmpf’ noise from the exhaust. The sound that brings this performance to a head is a throaty bass note that you just won’t get tired of. 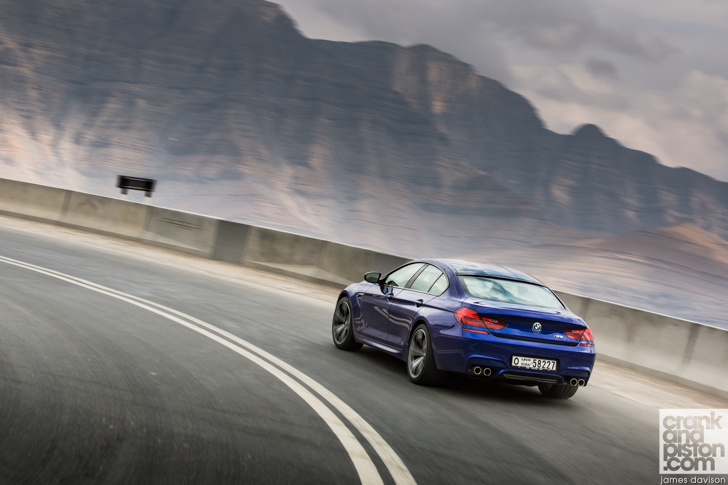 I had been concerned that a drive in the M6 Gran Coupe would be a little disappointing, that the weight and luxurious interior would knock the performance. I was wrong. Yes, the weight plays its hand, feel for the front end is questionable and visibility can be questionable at times. But the M6 Gran Coupe is exactly what it should be: an M. It’s a lunatic at speed and the abrupt pick-up is given a nudge by a playful back end and ‘look at me’ soundtrack. It makes an impression, begs others to notice it, and encourages you to chance your luck a little without spitting you into the surrounding landscape. Just as a BMW M car should do.