The dashboard comes to life in a beautiful display of lights and graphics with the only audible notification that the i8 has woken from slumber being a pleasant chime. Or, I may have just received an SMS. Slotting the lever in to drive and setting off in complete silence is something I have yet to get used to in a car but the i8 instantly surprises me. It is smooth and comfortable, absorbing the bumps of the short road coarse we are first tackling with ease. The electronic power steering is light and lacking in much feedback but still manages to feel fast and direct and there is also a nice graduation to the breaking.

Building up speed produces an electronic whine from the front motor that, far from being annoying, is actually the familiar soundtrack of many sci-fi movie vehicles. The future, it would seem, is now. Push a bit harder or pin the fast pedal to the carbon and that three-cylinder yoke kicks in with a surprisingly meaty roar that possesses a very uncharacteristic three-cylinder warble. Methinks BMW audio-wizards have been cleverly playing with our preconceived notions of what a hybrid should sound like.

There is surprisingly little to criticise the i8 on while driving on regular roads and observing the speed limit. Comfortable, quiet and power on tap when you need it will no doubt combine with a smug satisfaction of being environmentally friendly for prospective i8 customers. Entering the fast circuit at the Autodrome de Miramas however, means that it is time to dispense with the tree hugging and burn some rubber. Sorry tree huggers, but needs must etc.

Selecting Sport Mode adds a bit of adrenalin to this hybrid mix of technologies. The steering weights up and the i8 wakes up. It certainly has pace and will quickly hit the 7000rpm limiter while that three-cylinder is singing its heart out behind you. The power doesn’t come on in an explosive inch-punch to the chest type fashion but rather a smooth constant delivery from the combined output of all the power plants. The surprising thing is that it is delivered without any noticeable tug-of-war from the individual units and that little 10kW generator strapped to the three-cylinder means lag from the turbo just isn’t there. Everything feels rather natural with the added bonus of having plenty of instant torque on tap from the electric motor.

Cornering duty is handled with confidence with nearly perfect 50:50 weight distribution from the i8. Weighing in at 1490kg, it is about on the money for a similar sized sports car but for a hybrid, lugging extra tech, that is exceptional. It is where that weight is situated which also makes a massive difference. The centre of gravity on the i8 is lower than on any other BMW model which results in minimal body roll, keeping it firm footed and planted. On corner entry, the i8 totters on the edge of oversteer followed by the electric motor spooling up power to the front wheels to pull you out of the corner. From behind the wheel all this feels natural, inspires confidence and doesn’t feel like intrusive technology. I probably would not have sensed the power transference happening at all if a BMW engineer hadn’t explained it to me beforehand.

Continues on next page >> 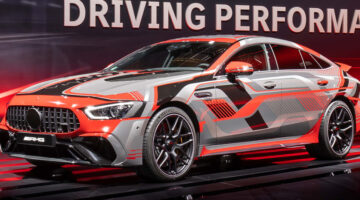