We wave farewell to the long-term Audi Q5 S-Line as members of the crankandpiston.com team seriously considered buying one.

The verdict is in. A few months ago I pulled rank and took temporary ownership of the Management Fleet Audi Q5. I’ve been looking for a new daily commuter for quite some time – something with a bit of poke, elegant looks and ample practicality – and after a few weeks driving to and fro, hither and yon, the Q5 emerged as a strong contender for the role.

On the outside, the mid-sized SUV doesn’t offer the same garish flash as some of its rivals, and I personally would have preferred a touch more RS grunge to the design, but the overall look of the Q5 is an elegant one, certainly (I was particularly enamoured by five-spoke 20-inch ‘S-Line’ alloys). The sprightly nature of the 272bhp 3-litre V6 under the bonnet kept the Q5 in the running too. Though it doesn’t offer the same fireworks of a V8, the semi-big unit nevertheless offered solid acceleration with little in the way of lag at either the top end or lower. And since the Q5 would not be many people’s weapon of choice for a weekend hoon, comfortable poke was really all that was required. And, ultimately, delivered. 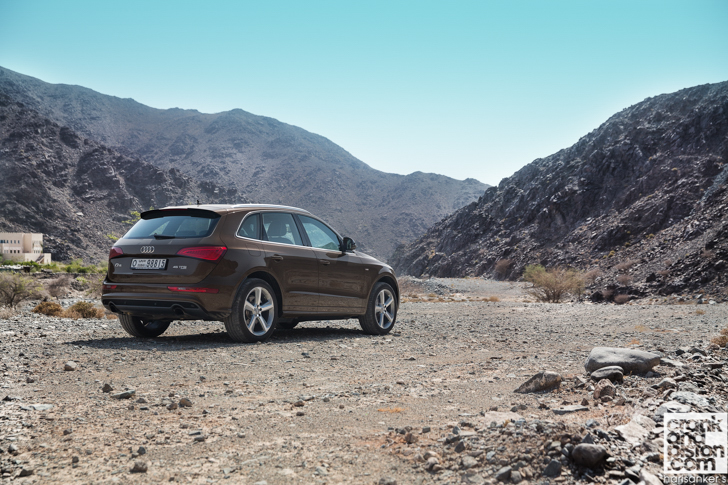 And in ‘comfort’ was where the Q5 truly shone. In my opinion, in this segment and price bracket, there’s little that comes close. While the softly sprung ‘Dynamic’ suspension doesn’t offer quite as much road holding as I’d care for, it does ensure Audi’s SUV massages out bumps on the road rather than bouncing over them, just the ticket after a hard day slaving over the company chequebook. The easy-to-use infotainment system – complete with an MMI navigation system, Bang & Olufsen Sound System, optional Bluetooth connectivity and three-zone automatic air conditioning – made longer haul journeys, when they arose, yet more comfortable. Lashings of head and legroom plus a big boot and fold-down rear seats ticked the practicality boxes nicely too, and having shown what it was capable of on the rough stuff during its brief #LandofQuattroTour outing last month, the Q5 even demonstrated its potential as a weekend rock crawler if required.

It was a difficult decision then, and though ultimately I opted for something else, the Audi Q5 gave me plenty to mull over. Having shown no real interest in it before our long-term loan, the practicality, poke and even character of the Q5 demonstrated there’s much more lurking beneath that Teak Brown finish.

And yes, I ended up getting a Range Rover. With a quite a bit more money thrown in!