Aston Martin’s upcoming DBX crossover might wear the Varekai name when it reaches production in 2019, revealed through a recent trademark filing.

According to our sister title Auto Express, the Varekai name – also associated with a Cirque de Soleil show – has been trademarked by Aston Martin Lagonda under a classification for “Passenger cars and racing cars and parts and fittings therefor”.

While the name might sound unusual, it would fit in with the company’s tendency for model names beginning with “V” – think previous models such as the Vantage, Vanquish, and the upcoming Valkyrie hypercar. Further clues to the name’s application come from its meaning – in Romany, Varekai means “wherever”, an appropriate name for a car designed to tackle more than just paved terrain.

Aston Martin previously confirmed it has taken over the production facility that will build the DBX, or perhaps now Varekai, in 2019. The brand’s entry into the lucrative global luxury SUV market is already confirmed for production at the St Athan plant in south Wales and we’ve been treated to our best look yet at the stunning, near-production DBX concept car that starred at the 2015 Geneva motor show.

The most recent images show the Aston Martin DBX Concept in the ex-military hanger where the production car will soon be built, after the Ministry of Defence sold the building directly to Aston Martin. Back in 2015, Aston Martin shocked the Geneva motor show crowds by unveiling the DBX concept – an all-wheel drive, all-electric crossover unlike anything the firm has ever produced.

A luxury GT to defy convention?

The brand said at the time that the DBX had been created to ‘defy conventional thinking about the luxury GT segment’, and while luxury SUVs are now nothing new, the DBX is far from traditional in its approach.

In terms of styling, the DBX is unmistakably an Aston Martin. The work of Chief Creative Officer Marek Reichman and his team, it’s among the sleekest, most graceful interpretations yet of the crossover genre.

At its base level, the DBX is a four-seater, with ‘generous’ luggage capacity (in both a rear boot and a forward load bay, like Tesla’s Model S) and a beautifully-trimmed cabin worlds away in design from the firm’s existing products.

Towards the rear the DBX once again takes on familiar Aston Martin cues, including a wrap-around light unit not unlike that on the Vanquish. More unusual is the semi-floating roof, with buttresses that extend beyond the base of the rear window and appear to hover over the rear wings.

Most unusual of all though is the powertrain. Traction is supplied to all four wheels by in-wheel motors, while a lithium-ion battery provides the juice. No range or performance details have been revealed, but the DBX does use a kinetic energy recovery system, and the steering too is electric, a drive-by-wire system.

‘The DBX Concept is a challenge to the existing status quo,’ explained Aston Martin CEO Dr. Andy Palmer on the car’s unveiling, ‘…It envisages a world…when luxury GT travel is not only stylish and luxurious but also more practical, more family-friendly and more environmentally responsible.’

‘A concept car such as this should challenge conventional thinking and explore the art of the possible.’

we spoke to Marek Reichman at the 2015 show to get his thoughts on the car – and the design direction of the brand.

‘What’s very important for us is keeping the feeling of ‘Power, beauty and soul’, and therefore an agility. At the end of the day Aston Martin is renowned for sports cars, so in generating a crossover we’re generating something that has the feeling of a sports car, but with all the practicality of a ‘soft off-roader’ – a higher ground clearance, a higher seating position, much more space for a family.

‘The main features are the grill, which is unique. Everything emanates from the grill. Our cars are beautiful from every aspect. We have a feature line that runs from the front of the car all the way to the back, which really defines the muscularity in the shoulders.

‘In terms of the front lights, it’s not about the personality of a sports car. It’s a genteel personality, beautiful proportions, elegant features. An impression of confidence, but without being aggressive. Our sports cars can be the aggressors – this car doesn’t have to be.’

Appealing to a new audience?

‘Absolutely. More females, younger, in different parts of the world… Four-wheel drive and a higher ride height opens up a lot more new territories for us, whether that’s in South America or certain parts of North America where for half of the year they’ve got incredible snow conditions.

Could you maintain overall proportions with a five-door model?

‘Yeah. We already have in the planning how we develop this into a five-door. It really started with a five-door, but we’re showing the concept as a two-door form, so we know everything will work.

‘The wheelbase gets extended for the five-door, but not by much, and the overhangs front and rear stay more or less than same – the head clearance in the rear and the extra doors are the biggest differences.

‘Yes. You’ll start to see a theme in terms of shark nose – from this, the Vulcan and also the DB10 that’s going to appear in the Bond movie SPECTRE. [All] have a very, very severe shark nose face, and that makes the badge prominent, it makes the grill prominent.

It’s important for us. In terms of pedestrian crash regulations, it’s not a problem. The lower of the car is more important in that respect.’ 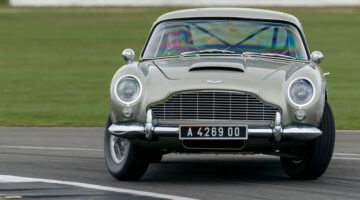 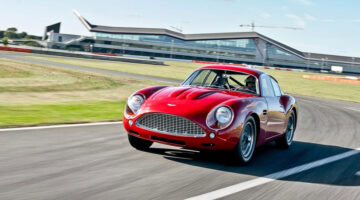 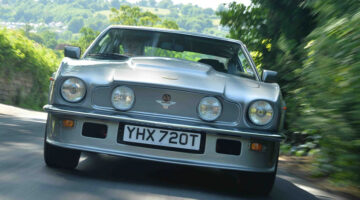