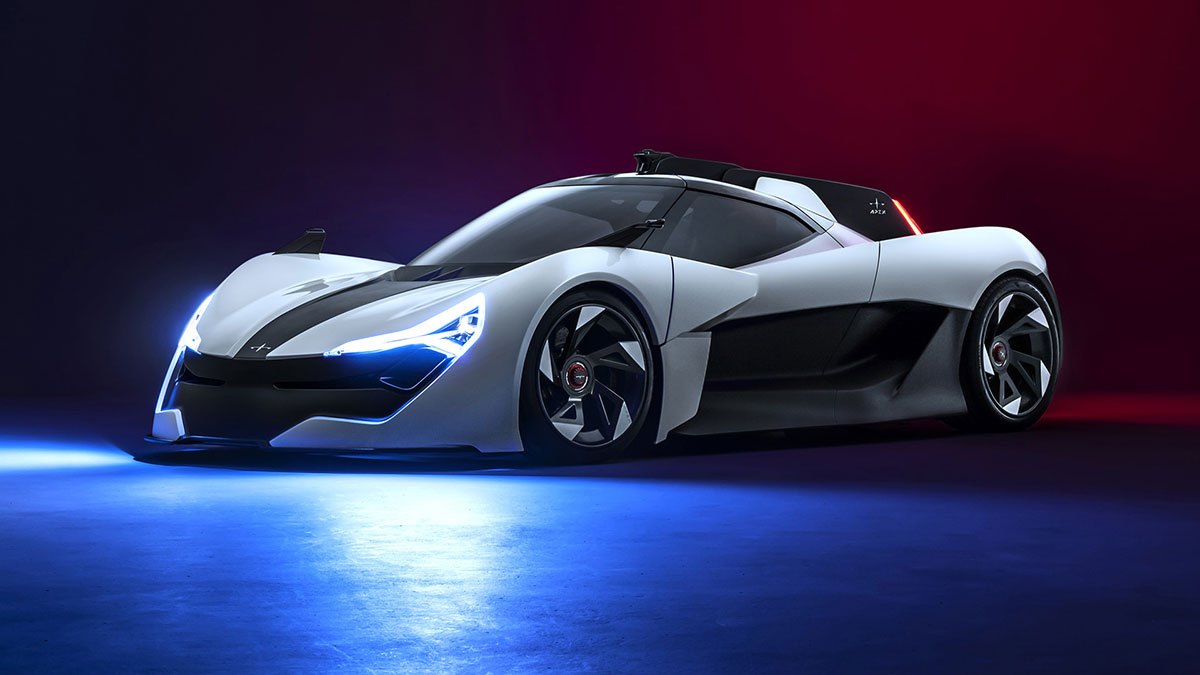 The world will gain a new electric sports car in 2022 when the Apex AP-0 enters production. But while recent high-performance electric vehicles have been towards the higher end of the market, with seven-figure price tags, the AP-0 will be priced from a more realistic $185,000, plus local taxes.

That price will put the AP-0 among more conventional sports cars such as the Audi R8, McLaren 570GT and Aston Martin Vantage, but as we’ve come to expect from those powered by electricity, the new car has performance figures that will give almost any combustion vehicle a run for its money.

With 650bhp and 428lb ft at its disposal, and a carbonfibre chassis that keeps the overall kerb weight down to only 1200kg despite a 90kWh battery pack – similar in capacity to that of a Porsche Taycan – Apex claims a 0-100kph time of 2.3 seconds, and a top speed of 305kph. Additionally, the healthy battery size enables 515 kilometres of range in WLTP testing, with various charging capabilities spanning eight-hour fills to an 80 per cent boost in 15 minutes.

Central to the AP-0, almost literally, is a carbonfibre monocoque tub around which the body panels are wrapped. The batteries, like in many electric vehicles, are mounted low and flat to the benefit of a low centre of gravity. Single-seater-style pushrod suspension with automatic ride height adjustment is used at each corner, though as you’ll see from the images, the AP-0 will seat two passengers.

While mechanical technology is part of the car’s make-up, there’s been a real focus on up-to-date safety too. The car uses lidar technology (think radar, but using light) to create a three-dimensional map of the world around it, then uses this information to prepare the driver for hazards more than 100 metres away and in all weather conditions.

The driver will benefit from augmented reality tech, including a function that can act as a virtual race instructor for circuit driving, something Apex says ‘gamifies’ the way drivers can learn new circuits. Systems such as automatic emergency braking and adaptive cruise control are also included, with the car futureproofed to a degree to allow for Level 4 autonomous features in the future – in other words, a car eventually capable of handling most standard driving conditions without driver input.

You might say this defeats the object of a sports car somewhat, but there’ll be less ambiguity over the car’s styling. The AP-0 has a sharp, ground-hugging look (there’s 95mm of ground clearance) with shades of other recent sports cars from the likes of Rimac and Koenigsegg, but enough individual touches to mark it out as something unique.

That’s particularly apparent at the rear, where the tail light elements form a large cross shape, horizontally across the car’s width, and vertically from a central fin to the centre vane of the diffuser. Apex says the aerodynamic fin has been inspired by Formula 1 and endurance racing.

Inside, Apex has kept things simple, the seats formed from carbonfibre, the dashboard made from ‘smooth layers of materials’, and the steering wheel kept small. No personalisation options have been mentioned, but there are sure to be a few different colours and materials to make it your own.

Production is scheduled to begin in the fourth quarter of 2022, and it’s possible to place a deposit now. Apex won’t be sticking to just cars, either – future plans include a whole new racetrack and R&D centre close to Hong Kong.