An Interview with Norbert Singer. Porsche

(Psst, did we mention that this was THE Norbert Singer?!)

“Normally when you start a new project, you don’t speculate about success. You just do your work as best you can with the possibilities you have. And if you’re successful, that’s fine.”

Humble words from a gentleman whose cars have scored multiple victories at Sebring, on the treacherous Targa Florio, and an incredible 16 overall triumphs at the 24 Hours of Le Mans. Between 1973 and 1991, derivations of his cars won 14 times at Daytona. He has worked closely with Jacky Ickx, Jo Siffert, Henri Pescarolo, Mario and Michael Andretti, and Hans-Joachim Stuck among other legendary names. For more then 35 years, this gentleman helped Porsche deliver unprecedented levels of success in world sportscars, and left a legacy few will ever beat. And today, crankandpiston.com has the chance to sit down for a few words with former Porsche Race Department senior engineer, Norbert Singer.

With such a vast array of racing history to wade through, choosing where to start is tricky. Fortunately a very jovial Herr Singer is more than willing to discuss air-to-air heat exchangers, aluminium spaceframes, tubular chassis and other technical intricacies guaranteed to make my head spin. All the more surprising that his illustrious career actually began with a master’s degree in Mechanical Engineering in Aviation and Space Technology at Munich Technical University.

“When I finished my studies, there was no real opportunity in aerospace, especially in Germany,” Norbert begins. “In the late 1960s, the aerospace division was supported a little by the government but not as much as today. But I was also interested in motorsport: I went to the Monaco Grand Prix in 1967 and 1968. While I was still studying in Munich, representatives of a manufacturer – Porsche – were asking our institution if they had an engineer who could work in their race department. So the university came up to me and said, ‘are you interested?’ and I said, ‘yes, of course’. So already, before I even had my degree, I had a job with Porsche!”

Straight in at the deep end, Norbert’s first responsibility was the already famous 917, which made a show stealing debut at the 1969 Geneva Motor Show. Boasting a lightweight aluminium spaceframe chassis, vestigial rear wings, titanium coil spring suspension and a colossal 4.5-litre twelve cylinder engine that dwarfed the exiting 908’s powerplant, Porsche’s new sportscar proved immeasurably successful by taking not only Porsche’s first ever overall victory at Le Mans in 1970 but its second a year later. For a young Norbert (whose first experience with the 917 was at Austria’s now defunct Österreichring with Willi Kauhsen, Jo Siffert and Hans Hermann) his responsibilities lay much deeper than the new ABS brake system he had been charged to perfect.

“Coming into a racing department means you have to learn very quickly: I think I did my first test eight months after entering the company”, Norbert continues. “It was clear that the car was good, and we were obviously happy with the developments during the winter from ’69-’70. The 917 is a real prototype car and a real racing car, but you still have to achieve the minimum weight and get maximum power out as well as reasonable handling, which is not easy. And this was the first time somebody in racing had tried an ABS system. So it wasn’t just a race it was also a development! It was a challenge, and the success came as a surprise.”

With victory on the grandest sports car stage already under his belt, focus for Norbert soon shifted to the iconic 911 in an effort to further improve sales, at a time when ‘race on Sunday, sell on Monday’ was still a meaningful business venture. Success with the Carrera RSR in particular was extraordinary, with Peter Gregg and Hurley Haywood taking overall victory with a Brumos Team-prepared 911 at Daytona first time out in 1973. This was despite neither manufacturer nor team being aware until the eleventh hour that the RSR would compete in the prototype class rather than the GT category. Victory in the last Targa Florio as a World Sportscar Championship event in 1973 with Herbert Müller and Gijs van Lennep also stands as one of Norbert’s favourites (Porsche later christened its convertible 911, the ‘Targa’). Moving from a prototype to an adapted road car though brought its own issues, and finding the balance between handling and power with a newly developed turbo engine was an altogether new ‘challenge’.

“With a race car you start by improving the aerodynamics,” Norbert explains. “You have much more freedom. But on a GT car – even in 1973 when we ran in the prototype class – you are limited, because the basic shape is a road car. And the centre of gravity is higher. 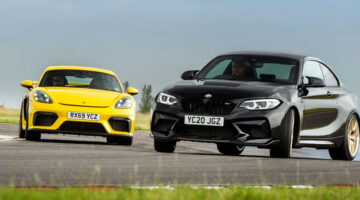