We’ve had a fair few Cadillac CTSs make their way through crankandpiston.com in recent years: the third generation CTS-V recently went face-to-face with the Dodge Charger SRT Hellcat, and diehard fans may remember the 2010MY CTS long-termer we had, the seats for which were the stuff of chiropractic legend. Throw in our first drive in the current generation when it landed in 2014, and we’ve experienced both the 640bhp supercharged V8 and GM’s mighty twin-turbo V6 range, and bought the respective t-shirts. But a turbocharged four-cylinder CTS? That’s a first for us…

All eyes for the 2016 CTS are on the clean sheet 3.6-litre V6, yes, but the 2-litre turbo in our latest Management Fleet recruit still packs an impressive 268bhp and 295lb ft of torque, keeping the BMW 5 Series and Mercedes E-Class with which it shares the mid-sized segment firmly in its sights: Cadillac is quick to mention that said unit is ‘one of the most power-dense engines in the industry’ thanks to a wide torque band. And yes, we’re keen to put that to the test…

Another notable addition for 2016 is the new eight-speed 8L45 automatic transmission that’s mated with the four-cylinder. Based on the architecture of the outgoing 8L90 transmission, the new 8L45 has been scaled and re-calibrated for the ‘performance envelope’ of the smaller engines on Cadillac’s books. Dropping 15kg over its predecessor and downsized considerably over the six-speed transmission that came before it means shift times should be noticeably slashed. Suspension developed alongside the more nimble ATS we’re told should also produce ‘greater feelings of feedback, control and response’, though let’s not forget this is a premium saloon. White knuckled cornering is not exactly what we
are expecting. 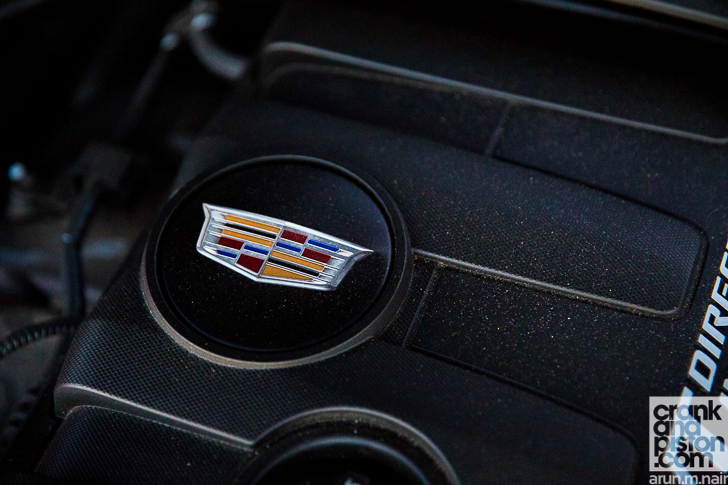 It’s not just the underpinnings of the CTS that have been given a refresh for 2016 though. Granted the exterior tweaks are few and far between, but the mid-sized saloon now runs on newly designed 18in polished wheels, boasts an ‘upscale grille’ and some new LED headlights. The Cocoa Bronze Metallic paint finish is one of three exterior colours, but opinions in the office are split. And based on feedback from our fans, we’re not alone there…

Having received the Premium Collection trim (of which the 18in alloys are a feature), the CTS receives further spit and polish courtesy of carbon fibre detailing across the cabin, heated and ventilated leather seats, and additional driver safety systems like Lane Departure Warning, Forward Collision Alert, and adaptive cruise control among others. Over the next three months we also have an updated CUE infotainment system to play around with, now with a higher-speed processor for quicker responsiveness. We’re also intrigued by the ‘phone integration’, which should – theoretically – allow us to use apps through the touchscreen.

A considerable amount has changed then since a CTS last graced these pages. While we’re not going to jump the gun, we’re confident the new Cadillac can spring a few surprises in the three months that lie ahead.