2019 Porsche 911 Speedster to hit the road later this year 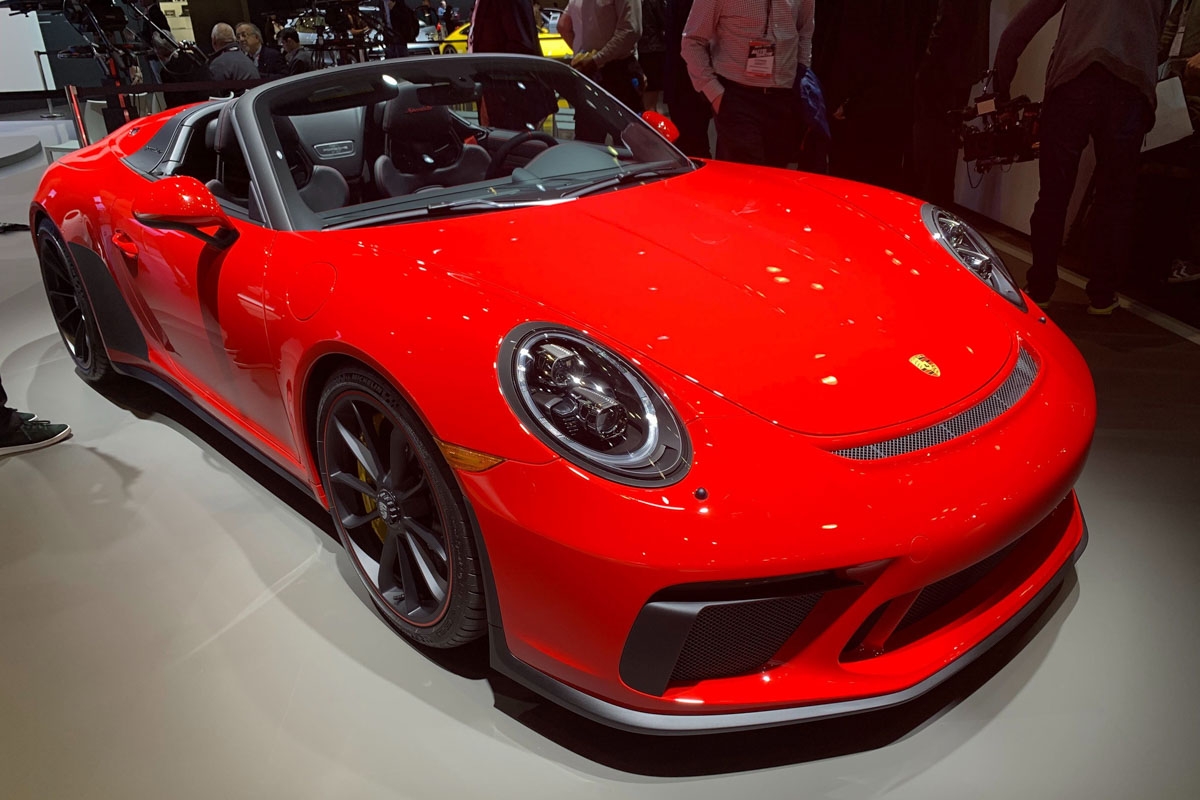 Following the debut of the road-going model last year, the Stuttgart marque has shown the production 911 Speedster once more at the New York Auto Show. The model celebrates the end of the current 991-generation production and the brand’s 70th birthday in one sleek, dramatic swoop. Looking just like the concept, it shares nearly all of that car’s modifications over a base 911, including the GT3-derived underpinnings and bespoke, retro-inspired bodywork.

A total of 1948 units will be built, in homage to the original Porsche 356’s year of release, to close out the 991 generation 911 before the new 992 reaches showrooms next year. Unlike the Speedster models that preceded this new version, it takes a decidedly more hardcore approach, being developed by Porsche Motorsport and incorporating the aforementioned GT3’s powertrain to create an all-together more focused special edition.

Its basic body is derived from a rather more humble 991.2 Carrera 4 Cabriolet, but the windscreen is shorter and positioned at a more laid back angle, with the side glass narrower to suit. Behind the front seats is a carbon fibre ‘double bubble’ panel which covers the roll-over structure and features a plexiglass wind deflector with the words ‘70 years of Porsche’ engraved on it. The wings and the bonnet are also made from carbon fibre composite.

The old adage ‘if you’re getting wet you’re not driving fast enough’ very much applies to the Speedster for there is no roof supplied – at all. Instead, there’s simply a tonneau cover for putting into place when the vehicle is parked to stop it filling up with water. It’s a basic interior, too, with no sat nav, no audio and no air conditioning, but a pair of carbon fibre bucket seats.

Under the retro-inspired skin lies the fundamentals of a current GT3, including the 4-litre 493bhp flat-six, a six-speed manual gearbox and the full GT3-spec chassis. There’s no official weight figure yet, but with the probability of less mass and that powertrain we can expect the Speedster to be very brisk indeed. Porsche has also developed a new titanium exhaust system for the Speedster, which Porsche says helps liberate an extra few brake horsepower.

In contrast to the unashamedly retro-look of the prior concept, the Guards Red Speedster shown at the Paris show has a more contemporary look, with new 20-inch center lock wheels and a simple black interior offsetting the bright exterior colour. If you were partial to the retro design of the previous concept though, Porsche will still offer a ‘Heritage Design Package’ to buyers, increasing the personalisation possibilities of an already very special Porsche.

Plenty of the concept’s detailing has also made it into production, such as the to the bonnet mounted ’50s-style fuel filler and (slightly reformed) ‘Talbot’ exterior mirrors. The cross-lamped headlights have changed though, being swapped for new darkened LED headlights, which is highly unusual for one being made in such low numbers.

Built in partnership with Porsche Exclusive for the addition of bespoke finishes and materials, order books for the Speedster open on May 7th, with first cars hitting the road late this year in the US.

Previous ArticleJaguar XE P300 R-Dynamics S AWD review – how does it compare to the Giulia Veloce?
Next Article Chevrolet Corvette ZR1 gets 1200bhp from Hennessey Performance