2013 Mille Miglia. A Museum In Motion

crankandpiston is in Italy and hits scrutineering – camera in-hand – ahead of the 2013 Mille Miglia.

“A museum in motion, unique and charming, in a beautiful framework of jubilant visitors” – Il Drake di Maranello

Old man Enzo spoke a lot of truth when he uttered those words during the 1980s. At the time, he was assisting in the revival of the Mille Miglia, and event he called ‘the most beautiful race in the world’. He probably said a lot of other stuff that I can’t quite recall at the moment because I am pitching a classic car induced trouser tent that has caused all blood flow to my brain to stop. crankandpiston is in Italy and this is the Mille Miglia.

When Jaguar extended an invitation to tag along on the 1000-mile (1600km) classic car extravaganza, there was no hesitation in our reply. Choice examples of the Jaguar Heritage fleet have been rolled out and a bunch of famous type folk have been drafted in to steer these achingly beautiful machines over the next few days. Yasmin Le Bon, David Gandy, Chris Harris, Alex Buncombe, Jim Gianopulos, Daniel Day-Lewis, Bernhard Kunht, Hannah Herzsprung, Michael Quinn Salvatore Ferragamo, Andy Wallace and Sir Chris Hoy will be piloting these priceless Jaguar jalopies and the bookies have already started to take odds on which team will cross the finishing line first.

The dastardly duo of @harrismonkey and Alex Buncombe are looking strong with their combined sideways experience (always whilst talking to the camera) and Jaguar classic car racing pedigree. However, Andy Wallace is a bit handy behind the wheel and has also been tutoring his partner Sir Chris Hoy in the art of hooning recently.

Today’s action was limited to scrutineering in pre-stage preparation. The Jaguar presence is stronger than it has been in years – with three C-Types and three XK120s headlining the company’s efforts – but the Mille Miglia attracts some serious competition from other manufacturers and privateers alike.

Thus far the Mercedes-Benz 300SL is proving a big crowd pleaser, as is the Porsche 356, several examples of which have been receiving interested looks as layer upon layer of polish has been applied to the pristine paintwork. Despite only those models – or examples thereof – that competed on the original speed run between 1927 and 1957 are eligible for the competition, there’s still well over 400 choice machines to keep the office Canon busy. Our chariot of choice will be the Jaguar F-Type, only a few weeks after we took said roadster for a spin in Spain. 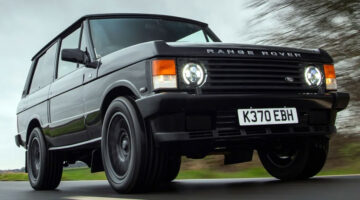