Petrolicious presents the latest in its ‘Morning Coffee’ mini-series, this time starring a 1965 Alpine A110 Tour de France

Long-time readers of crankandpiston.com may remember a few months ago, when Petrolicious launched a new mini-series called ‘Morning Coffee’, in which they begged the question, which gets you out of bed quicker in the morning: an espresso or a classic car that quivers one’s man loins to jelly?

Turns out, for most fans, it’s the latter, as proven by the inclusion of a very beautiful Ferrari 288 GTO. Now Petrolicious has launched another instalment in the series, this time starring a 1965 Alpine A110 Tour de France.

Now, we know it’s tempting, but don’t call it a Renault. Seriously, don’t EVER call it a Renault, since owners and aficionados can get a little tetchy about that. The brainchild of Jean Rédélé, Alpine – pronounced Alpeen – actually started life in the mid-1950s, the genesis of future products being a competition version of the self-tuned Renault 4CV Jean had driven to 750cc victory on local rallies. Said debut model – the A106 – raised any number of eyebrows with its lightweight glass-fibre body and rear-mounted engine. It was a commanding class-victory for the A106 on the 1956 Mille Miglia endurance rally though that truly established Alpine’s competition record. It’s successor, the A108, steamrolled its opposition on the rally stages thanks to an updated double wishbone suspension setup and rigid, tubular steel chassis. It was with the A110 though that Alpine truly put its name on the map upon the Berlinette’s debut in 1963.

Debuting at the 1962 Paris Motor Show and entering production the following year (where it would remain until 1977), the new A110 comprised a glass fibre shell, and a 956cc four-cylinder from Renault’s R8 saloon, though a more potent 140bhp 1565cc ‘S’ variant would follow in the ensuing years. Pin-sharp handling and ever-increasing factory support from Renault meant on-stage success followed quickly. Jean-Claude Andruet would scoop the 1969 European Rally Championship with the A110, though the Berlinette’s Monte Carlo Rally achievements stands as its most accomplished. Alpine’s finished 1-2-3 at the event in both 1971 and 1973, the latter as part of a dominant run to the inaugural World Rally Championship.

Though Alpine would ultimately go bust in 1995, plans – and this rather cheeky concept – hint at a return for the French icon as early as next year.

Enjoy this Alpine A110 video?

You can check out more Petrolicious features HERE, and more of our Video posts HERE 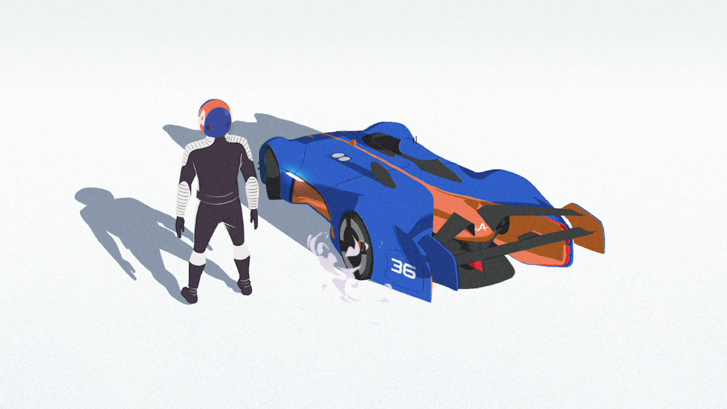