Will the first self-driving production car be a Mercedes?

We’ve already established that the new Mercedes-Benz E-Class is a thoroughly decent driving experience, albeit one geared towards more comfort than adrenaline. But perhaps more than the engineering of the driving dynamics, the real intrigue from experiencing the new E-Class comes from the amount of gadgetry that’s available.

For several years now, manufacturers have been issuing proclamations about the forthcoming era of self-driving cars, but the new Mercedes might be the closest we’ve yet felt to a driving experience that involves handing over responsibility to the vehicle itself. Currently, global legislation prevents car makers from doing that, but crikey, the E-Class feels like it’s only a small step away.

The state-of-the-art impression begins before you’re even in the car. The external highlight are the very snazzy headlights, comprising 84 LEDs that turn on or off individually to provide high beam visibility without blinding oncoming traffic. Cameras in the windscreen track things that shouldn’t be dazzled and configure the headlights accordingly in real time. Fascinating stuff, and the optional units also look cool thanks to some funky but non-functional blue inserts. 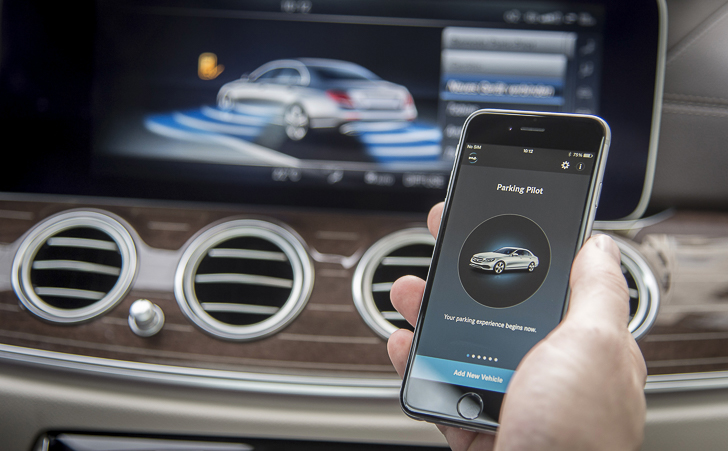 Inside, the dashboard is dominated by a huge display that looks like one elongated tablet, but is actually two large screens within the same surround. One acts as the digital dashboard, customisable in a variety of styles, while the other is your standard general info screen. For the first time, there are touch controls on the steering wheel, which let you swipe smartphone-style to fiddle around with the infotainment. The set-up looks good and allows you to place different elements in different places as you please. We found it intuitive and appreciated being able to have our preferred information available at a glance once configured, rather than having to repeatedly scroll through menus.

“Make no mistake, this is what car manufacturers are gunning for: the age of autonomous cars will soon be upon us”

The new E-Class has many technological party pieces. The ability to park the car while outside it, using a smartphone app, is exceedingly clever and could be of considerable use to those with narrow garages or parking spaces. Sensors on the car spot a suitable space, much like existing self-park systems. But instead of sitting in the car while the steering does its own thing, you can exit, bring up an app on your phone and with a simple circle of the thumb move the car into the space, with all angles and steering taken care of by the Mercedes computer. A similar process brings it out of the space again, which will hopefully mean no more scraped doors on the garage wall. The system can be configured to bay or parallel park, and can go into bays either backwards or forwards depending on owner preference. 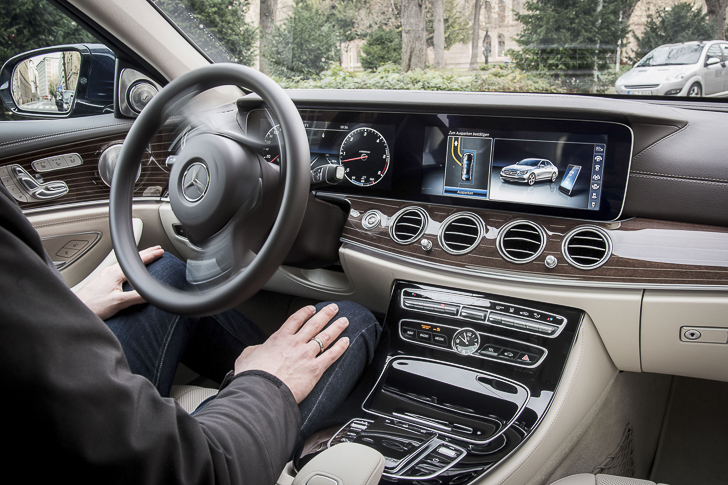 The E-Class gadget pièce de résistance, however, must surely be the Drive Pilot system, which combines adaptive cruise control, steering assist, blind spot information and several other sensor-and-camera-driven cleverness to drive the car with no input needed from the driver. Pull the cruise control stick twice to select the desired speed, and the car will keep distance with the car in front and steer between the lane markings. Indicate and the car will change lanes on its own (after making sure there’s nothing in the way). Take your hand off the wheel for too long and you’ll be given an audio warning, but only because global legislation currently prohibits the car taking complete charge. For now, a human must be around to intervene if things go wrong, but make no mistake – this is what car manufacturers are gunning for. The age of autonomous cars will soon be upon us, and this is the closest we’ve seen yet to the self-driving vehicle. It’s an eerie feeling, trusting the car to make decisions, and although it does seem that, on quiet motorways at least, everything works as it should, there’s a big difference between such a relatively predictable environment and a busy high street, or badly-paved country road. Still, it’s undoubtedly an extremely advanced system and it doesn’t take a big leap of the imagination to envisage a time when you can flick the car to Auto and kick back for some Facebooking.

Most manufacturers, including Mercedes, are quick to point out that self-driving functions will not mean you can’t drive yourself any more, and DrivePilot can quite easily be switched off in the new E-Class for when you want to get involved. To see more on what it’s like when you’re in charge instead of a computer, read the main road test HERE.