VW’s Touareg isn’t for the fashion-conscious SUV buyer, and what its new V6 petrol engine offers in refinement and pace, it loses in thirst 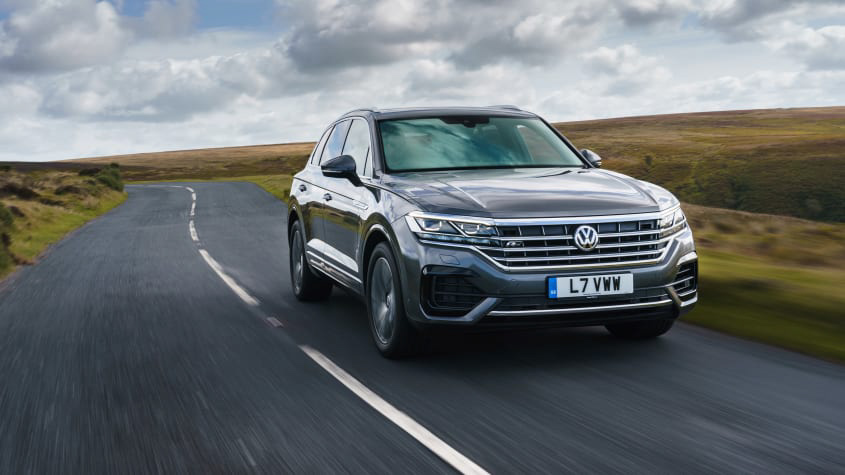 It won’t have escaped your attention that the world is falling out of love with the diesel engine, its market share dropping every month by a double-digit margin. And while this isn’t a huge issue for smaller cars that can switch to fuel-efficient three-, four- and six-cylinder petrol engines, the large SUV has a bit of an issue. Stop cheering at the back.

Having spent decades focusing on turbo-diesel engines that allow these behemoths to bludgeon their way across the landscape as quickly as a saloon car, manufacturers are now having to install petrol engines in a bid to retain those customers turning their backs on diesel.

Volkswagen’s answer has been to go through the Group’s engine cupboard and come away with the 3-litre turbocharged V6 engine that’s also used in Audi’s Q7/Q8 and Porsche’s Cayenne.

It’s a big ask for a petrol engine of this capacity and cylinder count to haul a car this heavy around, but when needs must, VW and its rivals will try anything.

At an unladen 2020kg, the 3-litre turbocharged V6 has its work cut out. With a peak power of 335bhp it’s a match for any six-cylinder turbo-diesel, if not more so, but with only 332lb ft of torque you fear the war is lost before the first battle gets going.

There’s an eight-speed automatic gearbox permanently driving all four wheels via a Torsen self-locking centre diff. The switchable off-road driving programmes are controlled via a rotary control in the cockpit.

Despite that weight, the 5.9sec 0-100kph time will impress some, so too the 235kph top speed, but use all of that performance and the 75-litre fuel tank will drain quicker than the digital fuel gauge can register. 20L/100km if you’re lucky.

VW’s Touareg has always been the simplest of the VW Group’s premium SUVs, leaving Audi, Bentley, Porsche and Lamborghini to show off the tech and sophistication. Which probably explains why the honesty of the VW product is the more resolved of them all.

Its permanent four-wheel-drive system features a centre-locking diff with asymmetric torque distribution capable of sending as much as 70 per cent of the engine’s torque to the front axle, with an additional ten per cent on top of that to the rear wheels. A number of settings for the four-wheel-drive system are available depending on the conditions you find yourself in. There’s On-road, Off-road, Off-road Individual and Snow. There are also four driver modes: Eco, Comfort, Normal and Sport.

Underpinning the Touareg are double wishbones at each corner with passive dampers standard. Air suspension, as fitted to the test car we tried, along with active rear-wheel steering, are available as an option. Electromechanical anti-roll bars are also available.

If the driving assistance system you crave isn’t fitted as standard, it will be available as an option. Screen sizes are as wide as 15 inches and the comfort and convenience list of standard and optional equipment is a comprehensive one. Bafflingly, too.

The V6 is a good one. Refined, responsive and well integrated to the Touareg’s drivetrain. It gets going quick enough when you ask it to, the engine smooth and consistent in terms of power and torque delivery, and it’s happy to run at high revs with no harshness or drop in get-go.

Its eight-speed gearbox is well suited, too, which means the shifts are smooth and it’s not hunting around for the correct ratio for the scenario you’ve put it in. It settles into a cruise without feeling strained or pushed to its limit, and if you need to pick up the pace it gets on its heels and moves.

The engine’s wider operating window eliminates the short punches of torque that always make turbo-diesel engines feel busy and that they are operating at their peak no matter what your speed, making for a far more relaxed drive. But it all comes at a price: a thirst for fuel that many will never have experienced and those who did run old-school petrol SUVs back in the day had hoped were behind them. In short, a turbocharged V6 is too small an engine for a car of this size.

As for the rest of the new Touareg, for us it remains the pick of the VW Group SUV bunch. It has the quality and premium touches others in the Group offer, and where some of those feel they are built down to a cost, the VW feels above and beyond your expectations. By not trying to be a performance car it also steers and rides as well as, if not better than its more overtly sporting family rivals, the air suspension in particular feeling especially well resolved compared to systems on other VW Group SUVs. And for many, the badge is the least ostentatious of them all. It’s the VW Golf of the SUV world.

Ultimately what the Touareg V6 highlights is that manufacturers need to get their act together when it comes to the weight of these vehicles, because no matter how you dress it up, a small-capacity petrol engine is always going to struggle hauling over two tons of SUV around the countryside.

I thought you might ask how much it costs. Without a single option, the R-Line Tech model we tested cost $73,323. Which in today’s world of overinflated prices manufacturers ‘charge’ for new cars to allow them to underwrite their PCP schemes, equates to around $500 a month depending on the size of your deposit and that of the dealer.

An equivalent Audi Q7 S Line with the same engine is $90 cheaper, with Porsche charging $70,750 for its cheapest Cayenne with the same power unit, although the VW has more standard kit. The Range Rover Sport fitted with a 300bhp, 2-litre four-cylinder petrol engine will cost you a chunky $80,769, BMW’s X5 xDrive40i M Sport costs $80,000, whilst Mercedes’ new GLE isn’t currently offered with a petrol engine. 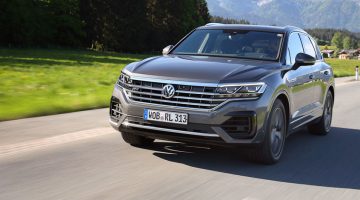