*NOW UPDATED WITH VIDEO(S)* Porsche unveils the second generation of the Panamera, featuring new engines, a new platform, a new design (sort of), and an AWESOME active rear wing

Much like the Cayenne, Porsche‘s four-seat Panamera has never been the most attractive model on its line-up, a factor the team in Stuttgart has clearly worked hard to alleviate on the second generation Panamera, which has now made its debut in Berlin, Germany.

The new Panamera Mk II has a new platform, a new drivetrain and a revised cabin design in its efforts to take on luxury rivals Audi, BMW and Maserati, but we’ll come back to that. First we want to discuss the ‘sharpened’ design on the outside, particularly the active rear wing.

Clearly the hours in front of the easel have produced so much, since the long, slightly rippled bonnet and air-intake heavy bumper at the front are much as we saw on the original’s debut in 2009. At the rear though there’s a much sharper set of LED ‘bladed’ taillights that stretch across the bootlid, much as we’ve seen with not only the most recent incarnation of the new 911 but also the 718 Cayman and 718 Boxster. On top of that there’s some larger exhaust pipes, extended wheelhouse over the new 19in/20in alloys, and a rear spoiler that slides out of the rear canopy whilst you’re on the move. If the cachet of driving a Porsche isn’t good enough, this effectively means you’ll own a Transformer. Think we’re bluffing? Check out the first of several videos below and skip to 1m 56s…

To create a sleeker, more dynamic look, the roofline rakes more aggressively although the new Panamera (teased HERE) is still 5mm higher, 6mm wider and 34mm longer than the outgoing model. Naturally cabin space – theoretically – has also increased, while the cabin design now bins the button-heavy mess of its predecessor in favour of touch-sensitive surfaces and features a new centrally mounted tachometer in the instrument cluster, inspired apparently by Porsche’s 1955 356 A. And yes, that 918-inspired steering wheel is there as well 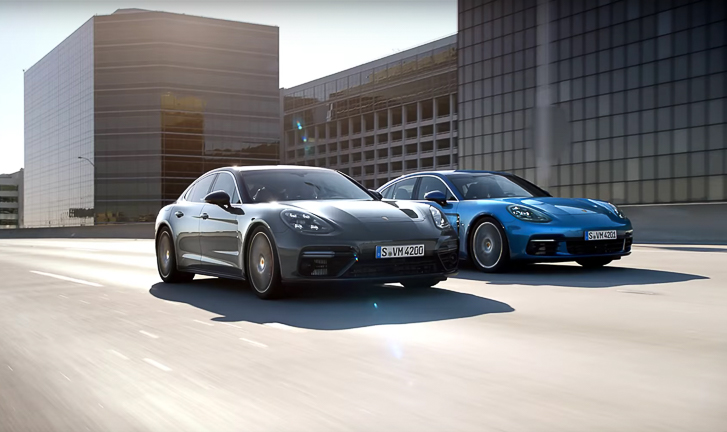 Redeveloped from the ground up, underneath there’s a brand new MSB platform, that heavy-use of aluminium to reduce weight and increase structural rigidity (it’s even been rumoured that the new Bentley Continental GT will also share the base). Suspension options vary depending on spec between steel sprung and adaptive air, though the new Panamera does feature four-wheel steering, mirroring similar developments in the sports car division.

Finally there’s a new range of engine, the Panamera the first on Porsche’s books to receive the company’s all-new 2.9-litre V6. Like the 4-litre V8 it features turbochargers and is mated with an all-new eight-speed dual-clutch transmission. At the heart of the 4S, the V6 produces 434bhp and 405lb ft of torque meaning a 4.2 second 0-100kph time and a 290kph top speed. The V8 in the Panamera Turbo meanwhile delivers 542bhp and 568lb ft of torque, enough for a 3.6 second 0-100kph time with Sport Chrono package, half a second faster than its predecessor albeit with the same 306kph top speed.

Enjoy our news piece on the new Panamera?

If so, you can read more articles about Porsche on crankandpiston.com HERE