This week saw seven decades of Le Mans racing machinery descend on La Sarthe for the eighth biennial Le Mans Classic, Group C brutes and classic Jaguars among the highlights during a weekend of epic action.

Now, when you put ‘classic Jaguar’ and ‘epic action’ into the YouTube dumpster, inevitability you stumble across on-board footage of Alex Buncombe, the former British GT racer whose on-board highlights include THIS C-Type thrash at Monaco and THIS E-Type mullering at Oulton Park. Plus, THAT opening lap of the 2014 Blancpain Endurance Series at Monza in a GT-R NISMO GT3 (yeah, you’ll definitely want to watch it HERE). This weeks’ Throwback Thursday accordingly takes us to the 2013 Donington Historic Festival, and more specifically, the Tom Walkinshaw Racing Jaguar XJS Buncombe is thrashing by the scruff of its neck. The V12 soundtrack alone warrants 5m 45s of your life all on its own, let alone the sight of Buncombe wrestling with the wheel – on opposite lock several times – and leaving little wiggle room when lapping traffic.

Unfortunately, the tragic passing of gentleman driver Christian Devereux would cast a pall over the weekend. The Briton succumbed to his injuries when the pre-1966 Mini Cooper S he was driving collided with an out-of-control Ford Mustang late on the Sunday afternoon.

You can check out more of our Throwback Thursday videos HERE, and more Jaguar stories HERE 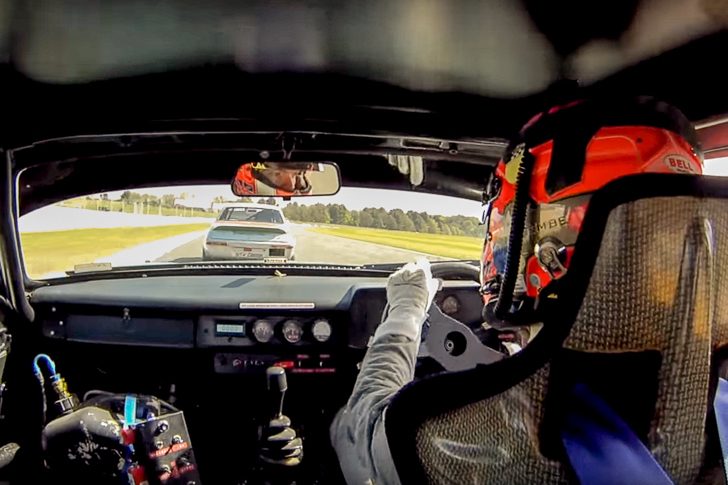 *Buoyed by the success of the ‘Group 44’ in the US, both Jaguar and a certain T Walkinshaw embarked on a European Touring Car Championship campaign in 1982. The mighty 5.3-litre V12, plus fuel injection that fitted snugly in a regulation loophole, meant the Jaguar was the car to bear in both 1982 and 1983 before securing ETCC championship glory in 1984. It marked the first touring car title for a Jaguar driver since Peter Nöcker’s 1963 success, while the Walkinshaw and Win Percy’s 1984 Spa 24 Hours marked Jaguar’s first endurance race victory since Le Mans 1957. 29 years later, the XJS didn’t quite replicate its success with Buncombe at Donington, the Englishman only salvaging fifth place and a DNF before switching to a Lister Costin for his first win of the weekend.