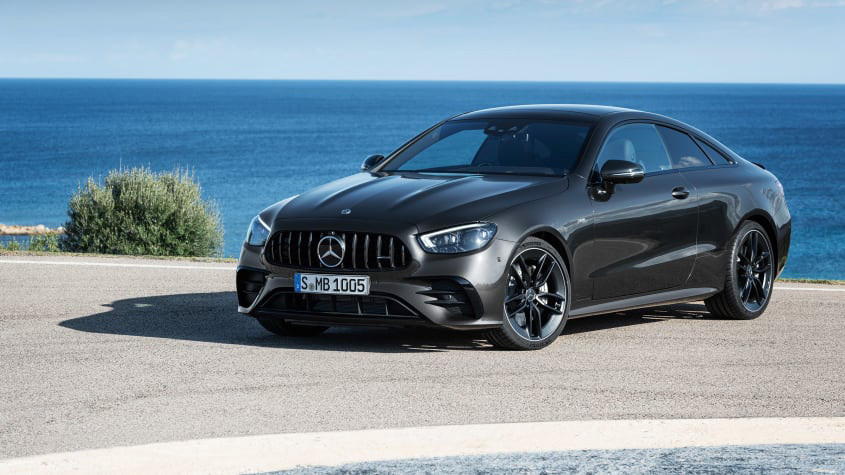 Mercedes has revealed the coupe and cabriolet versions of its updated AMG E53. As with the saloon and estate variants, the underlying mechanicals stay the same, but the E53 picks up a variety of detail changes, plus some new design elements and fresh interior tech.

The E53’s powertrain is the familiar 429bhp twin-turbocharged 3-litre straight-six petrol engine, again assisted by a 48V mild-hybrid system that powers an electric motor and starter generator which itself produces an additional 22bhp. Torque is also unchanged, peaking at 384lb ft between 1800 and 5800rpm, with the electric motor supplementing that with an additional 184lb ft.

Power is sent to Mercedes’ 4Matic+ all-wheel-drive system via a nine-speed automatic transmission, but unlike the full-fat V8-powered E63 doesn’t feature AMG’s clever wet-clutch automatic transmission, instead relying on the usual torque converter. Despite the mid-level power figures, the E53 Coupe will still reach 100kph in just 4.4sec, going on to a limited 250kph top speed. The slightly heavier E53 Cabriolet will do the same sprint in 4.6sec. For the first time on the E53, AMG will offer an optional AMG Dynamic Plus package that integrates a more aggressive ‘Race’ drive program to the driver modes, which now features AMG’s iconic Drift mode that decouples the front axle as found in more serious AMG models.

The chassis is also chock-full of tech to keep its considerable 1970kg in check, including standard air suspension and adaptive dampers which are adjustable via the E53’s numerous driver mode functions. Standard-fit 370mm cast iron brake discs gripped by four-piston calipers are featured on the front axle, but the rear do with more rudimentary floating calipers on smaller 360mm discs.

So far, so E53, but the new coupe and cabriolet’s changes are more obvious externally, with a new nose incorporating AMG’s now-signature panamericana grille, thinner LED headlights and a mildly reshaped lower bumper. The rear lights are also new, but the lower bumper and four round exhaust outlets remain as before. The E-class’s otherwise sleek exterior design is unchanged, exemplified by its pillarless side profile and smooth surfacing treatment.

Inside, the changes are similarly subtle, focusing on integrating Merc’s latest MBUX infotainment software and a new AMG steering wheel complete with a new haptic feedback control interface and optionally within the AMG Dynamic Plus package, two small performance mode selectors as found in more serious AMG models. The new steering wheel will be seen on future Mercedes models too, including the new S-class later this year which will introduce a whole new user interface design and aesthetic to the Mercedes range.

We expect it will cost from around $79,000 in coupe form, with the cabriolet costing around $3700 more when it arrives later in the summer. Non-AMG coupes and cabriolets have also been revealed.