Triumph Motorcycles will gun for the motorcycle world land speed record in August at the Bonneville Salt Flats with the 1000bhp Triumph Infor Rocket Streamliner. 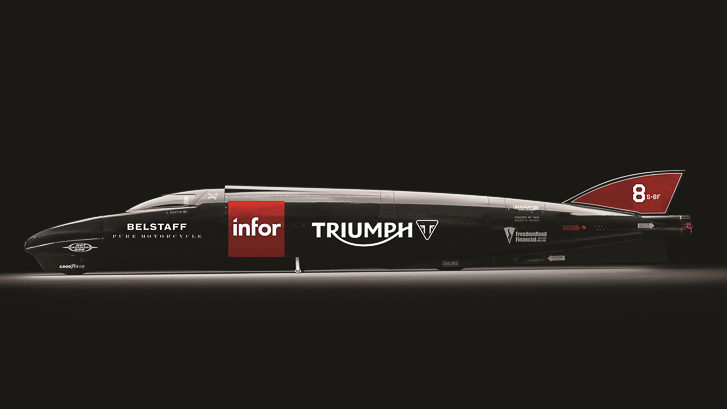 Seems Bonneville is the place to be these days, with the Bloodhound enterprise having already confirmed its high-profile land speed record attempt with both its 1610kph SSC Supersonic Car and current record holder Andy Green in October next year. Now Triumph Motorcycles has confirmed it too will make its return to the Salt Flats in August this year as it attempts to break the motorcycle world land speed record.

The bar currently stands at 376.363mph (605.697kph), achieved in 2010 by American Rocky Robinson on-board a Top Oil-Ack Attack streamliner. Triumph though will be hoping to leapfrog this formidable benchmark the 1000bhp Infor Rocket Streamliner. Built around a carbon Kevlar monocoque, the Streamliner measures 25.5ft long, 2ft wide and 3ft high, and is powered by two turbocharged Triumph Rocket III engines capable of kicking out 1000bhp if the rider is brave enough to peak 9000rpm. On that note, 12-time Isle of Man TT competitor Guy Martin will once again take the hot seat.

Said record attempt though has been far from smooth sailing. A 2015 run was aborted with just weeks to go when Martin high-sided his Tyco-run BMW S1000RR on that year’s Ulster GP Superbike race. The accident left the ‘Closer to the Edge’ star in bad shape, with broken vertebrae in his neck and back, broken ribs and a severely knackered right hand among the more serious injuries for which Martin went under the knife.

Indeed, even the 2015 attempt was not Triumph’s first run at success, the British icon holding the ‘World’s Fastest Motorcycle’ title between 1955 and 1970 with the Devil’s Arrow, Texas Cee-gar, Dudek Streamliner and Gyronaut X1, the former setting the benchmark terrifyingly high with a barely credible 245.667mph (395.28kph). So proficient was Triumph on the Flats that the Triumph T120 Bonneville was built specifically to honour Johnny Allen’s ‘56 193.72mph (311.762kph) record run. Its combination of light weight, a strong frame, and formidable power from a parallel-twin four-stroke engine leading to the Bonneville being dubbed thereafter ‘the original British superbike’.

A quick tribute video to the Triumph Bonneville can be found below, but before that you can also see Guy Martin’s first experience of the Triumph Infor Rocket Streamliner he will – finally – use during his own record attempt.

Enjoy this article on the Triumph Infor Rocket Streamliner?