After four months on the books, crankandpiston bids farewell to The Management Fleet Toyota 86 TRD.

The time has come to say farewell to The Management Fleet Toyota 86TRD, and as I sit here waiting for the kettle to boil, I’m reminded of a question I mused when the TRD first arrived: would we opt for one over a standard 86?

On the one hand, I’d have to say ‘no’. The Toyota Racing Development seats have been a point of contention since the car arrived: for those members of the team with loftier hips, the tight confines can be a quite literal pain in the arse, and unless you’re partial to driving side saddle, it’s unlikely you’ll come to love this setup. It’s also worth noting that while the seats have been changed, the mounting for the seatbelts has not: your first attempt to buckle them WILL lead to swearing and scuffed knuckles.

I can’t honestly say I’m enamoured by the six-speed automatic either, it proving less engaging than the six-speed manual alternative and a little dopey on downshifts. Then there’s the rear seats, for their diminutive size and lack of practicality for all but the youngest of children does take the edge off the TRD’s ‘racing-spec’ nature. Saying that, the rear seats are identical to those found in the standard 86, meaning a check in the ‘con’ column for both models regardless. 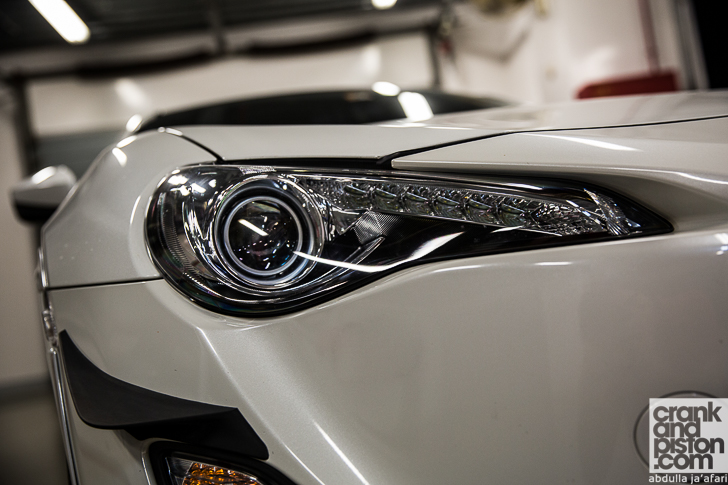 Then again, let’s not be too hasty. The TRD is primarily a cosmetic upgrade for the 86, and a striking one at that, the new rear spoiler and side skirts, dual chrome exhaust tips, and front winglets on the bumper among my own personal highlights. There is also additional bracing across the engine bay for added stiffness through the corners and, as a result, improved manoeuvrability. Fortunately Toyota has resisted the temptation to eke that oversteer-y nature out of the TRD’s DNA, for this – plus a perfect weight-distribution – helped make the Toyota 86 one of the most engaging budget sports cars on the market today.

Okay, moment of truth: would I opt for the TRD-spec over a standard 86? Quite honestly, no. By its very nature the TRD is stiffer, more serious, and ultimately, less practical than its road-going counterpart with, if we’re being honest, no real tangible improvement to the performance (unless you possess Vulcan-like telepathy skills).

There’s also the little matter of $10K being added to the asking price, which if you have the money for two European ski trips burning a hole in your pocket, could be considered a bargain. If on the other hand you’re looking for an inexpensive, engaging budget sports car you can use on a day-to-day basis, you might want to try a standard 86. We’ve heard its really quite good.