Those of you who read about the brand new TRD 86 Cup and are now wondering ‘yes, that’s all well and good, but what if I wanted the Cup car for the road?’ may want to take a look at the new 86 TRD.

It’s one of several aerodynamic packs that celebrates the launch of Toyota Racing Developments – the Japanese marque’s performance arm – in the UAE. While the 86 is probably Toyota’s most celebrated model, TRD kits are also available for the Corolla, Aurion, and the Yaris in both Sedan and Hatchback guise.

Key aerodynamics modifications on the 86 TRD include enhanced front and rear bumpers, spoilers and side skirts, 18-inch performance wheels shod with wider, low profile Yokohama Advan Sport, sport oil filters and lowered springs. Each gives the 86 TRD a lower, more aggressive stance and is designed to make the rear-wheel sports car more dynamic through the corners. There has however been no change to the 2.0-litre flat four boxer engine under the bonnet, the 200hp and 151lb ft of torque figures remaining the same as do the 7.6-second 0-100kph time and 225kph top speed. The new sports exhaust with quad tailpipes is the closest mechanical modification you’ll find. 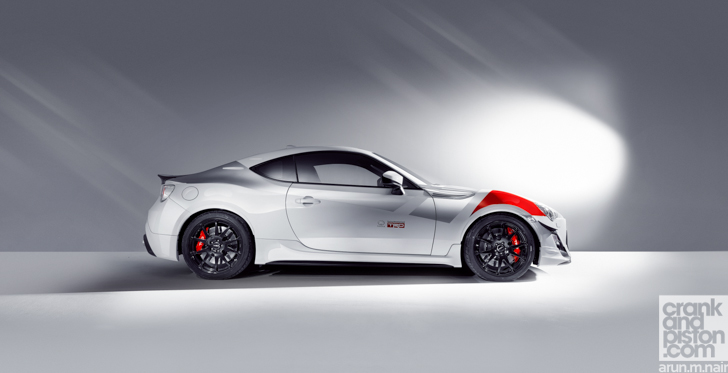 A quick look at their history shows just why Toyota Racing Development is taking this latest example of its heritage so seriously. Established in 1954 – and marketed under the less traditional name, Toyopet Seibi Co. – it wasn’t until 1979 that the first ever TRD aftermarket ‘speed shop’ was established in Southern California, some 22 years after Toyota’s first official motor race. In 1980, Toyota took a sizeable step down the American motorsport path it would make its own over the next three decades by sponsoring the Grand Prix of Long Beach, the longest running major street race held in North America today. In 1989, TRD went a step further by becoming an official partner of the Atlantic Championship, a significant feeder for America’s premier single seater series, CART, and in 1996, Toyota was an official engine supplier for the two CART teams. 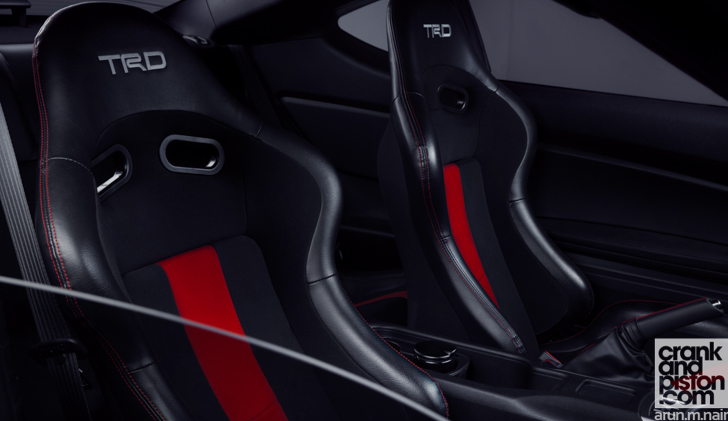 By 2002, Toyota had secured both the CART Manufacturer and Driver’s Titles with Newman-Haas’s Christiano da Matta, and in 2003, it secured Indy Racing League Manufacturer and Driver’s titles as well as victory at the prestigious Indy 500 with Penske and Gil de Ferran. From then on it was all about NASCAR, Toyota first entering the NASCAR Camping World Truck Series in 2004 and the Nationwide Sprint Cup in 2007, consecutive championships for which came quickly. By 2013, the Toyota Tundra had amassed a staggering 100 NASCAR truck victories.

The 86 TRD boasts a considerable 60-year legacy then about its red/silver/black shoulders, and whilst we’d love to tell you how our Pearl White subject handles the corners, crankandpiston.com will have to wait for another day. Alongside this studio shoot though, we did manage to put together something special with the Toyota 86 TRD. But you’ll have to wait to see what we mean by that…