Czech Republic artist Tom Havlasek celebrates ‘the golden era’ of motorsport, from Formula 1 to the 24 Hours of Le Mans. 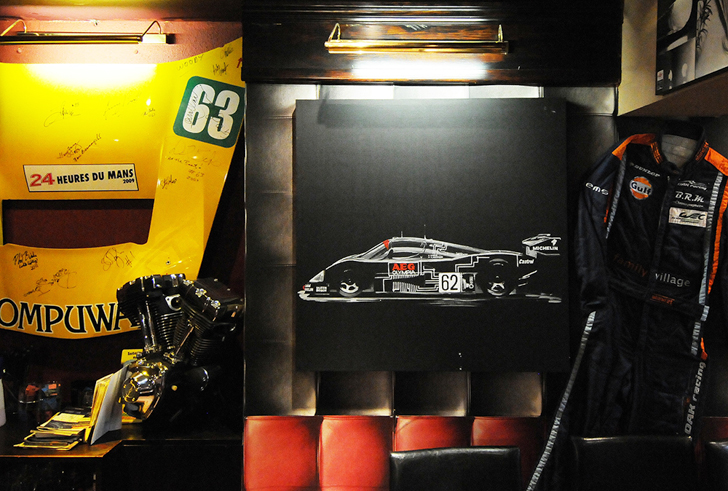 “Motorsport is a bottomless theme. There’s just so many different classics out there worthy of being painted, and so many from ‘the golden era’. There’s so many examples from Formula 1, but I just love classic sports cars from Le Mans, especially ‘60s, ‘70s and ‘80s. So many legendary races!

“In the next few weeks though, I’d like to paint something with a little more heritage, like Rudolf Caracciola’s ‘Silver Arrows’, a couple of Maseratis or Alfa Romeos. Maybe even a Bugatti Type 35…”

All well and good for the goldern era of motorsport then, but what of Tom’s views of contemporary racing…?

“I’m not a big fan, no. It’s all computers, electronic systems and commercial interests. It’s just a completely different atmosphere. Pure racing is what really interests me.”

If some of the above shots seem a little familiar – Aryton Senna’s McLaren MP4/6 at the ’91 Hungarian Grand Prix springs to mind – that’s because the base of each art piece starts with a single photograph (properly sourced and accredited, of course). Digitally manipulated – enough to emphasise a certain frame but not so much to destroy the photographer’s original shot – the resultant image is then transferred to the canvas with acrylic paints. Blurring the background to let the subject ‘pop’, no image measures larger than 95cm by 95cm (part of Tom’s abstract style). Nor is the artist afraid of splashes, drops or accidental blurs, since by their very nature they convey a sense of motion.

“I want people to smile when they see my work. To remember drivers, teams and cars they grew up watching. And I think – I hope(!) – that my style helps that.”

Growing up in the Czech Republic – a stone’s throw one of his favourite hunting grounds, the Brno Masaryk Circuit – it wasn’t long before an enthusiasm for motorsport began to grow, though it wouldn’t be until much later that it became an integral part of his portfolio.

“My first drawing competition was way back in 1986, and I was only three years old at the time. For years after that, I worked with street art projects, stencils, graffiti  painting, etc. It was only when I was studying for a Computer Graphics Design degree that I realised this wasn’t the way I could make a career. On the plus side, I did learn a lot from this time in my life.” 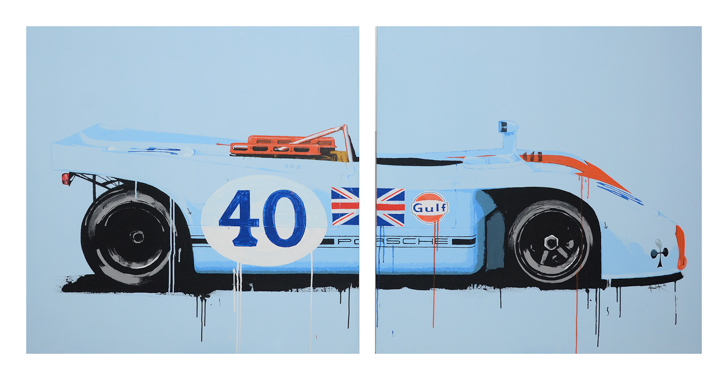 Today, Tom shares a keen enthusiasm for Ferrari, Lotus and – in particular – Porsche (the legendary 928 and the 944 join the 911 in his fantasy garage). It’s an enthusiasm that built yet further a few years ago at the Monaco Historic Grand Prix – and a little later at the Le Mans Classic – when Tom met and spoke extensively with Derek Bell, Jochen Mass, Gijs Van Lennep, Jürgen Barth and Romain Dumas, all former winners at La Sarthe with Porsche (remember Dumas’ category win in the RSR in 2013). You also don’t need to ponder for too long whom Tom was rooting for at Le Mans in 2014, or indeed will be in 2015.

Perhaps, if commissions dictate, he’ll be there – acrylic paints in-hand – to see it personally. 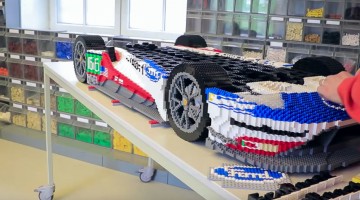